RFK Jr Receives A Standing Ovation At The Autism One Conference. “Let The Sci... Confirmed science shows that vaccinated children have 420% higher risk of ADHD compared to non-vaccinated kids – NaturalNews.com. Science paper on vaccines accidentally admits most flu shots don’t work – Nat... (Natural News) All healthy persons six months of age and older should get a routine flu shot, according to the Advisory Committee on Immunization Practices (ACIP). 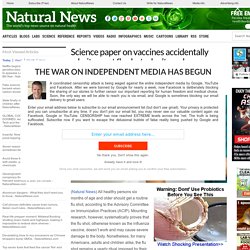 Mounting research, however, systematically proves that the flu shot, otherwise known as the influenza vaccine, doesn’t work and may cause severe damage to the body. Nonetheless, for many Americans, adults and children alike, the flu shot remains a yearly ritual imposed by their doctor, employer, or school. But how effective, safe, and useful are these yearly vaccines? The flu vaccine is developed months before the start of the flu season to give manufacturers enough time to produce the shot for as many people as possible. (DOCUMENTARY) Doctors continue to push untested “combination vaccines” BREAKING: CDC confirms Natural News 100% CORRECT on report of African Green Monkey kidney cells used in vaccines – NaturalNews.com. 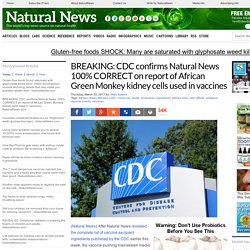 Some of the arguments backing this assertion included wildly uninformed opinions such as, “there’s no way the CDC would approve monkey kidney cells being injected into humans.” Vaccine ingredient DENIALISM, it seems, is alive and well across the fakestream media. As Natural News correctly reported, one of the many animal-derived ingredients used in vaccines and openly admitted by the CDC is African Green Monkey kidney cells. Apparently, this realization was just too much for the scientifically illiterate media (and wholly dishonest vaccine pushers) who insisted it couldn’t possibly be true. The MMR vaccine: Why it's sensible to worry about the way it has been regulated - Alliance for Natural Health International. By Jerome Burne, investigative health journalist and author, HealthInsightUK I have a confession. 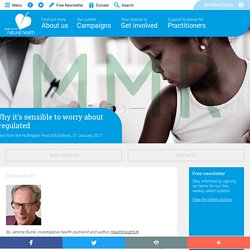 I am one of those people who has been radicalised by a preacher of hate; someone in the same league as the cleric with a hook Abu Hamza. At least that is how The Times described those who attended the first UK screening of the documentary Vaxxed (about the dangers of the MMR vaccine) last week. A large proportion of those present were parents who either believed that a vaccine had damaged a child of theirs or were agonising over whether to vaccinate or not. VAXXED: Why we should be allowed to watch the movie - Alliance for Natural Health International.

By Sally Beck, journalist and writer The controversial documentary Vaxxed: From Cover Up to Catastrophe, came to London last week, screened in secret at Regents University, London. 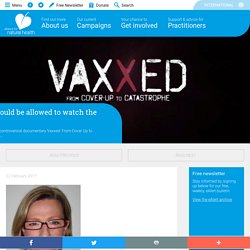 Finally, an opportunity for us to find out whether any of the claims it makes hold merit. VAXXED is based on extensive recorded interviews with whistleblower, Dr William Thompson, a former senior scientist at the CDC (Centres for Disease Control), the US agency concerned with safeguarding public health. The film looks at whether his claims – that he, and four others at the CDC, skewed data in an important study looking at whether the MMR jab (measles, mumps and rubella) can cause autism – are true. CDC is a vaccine company, a “cesspool of corruption” says Robert F. Kennedy Jr. – NaturalNews.com - 7 Highlights with LINER. (Natural News) Robert F. 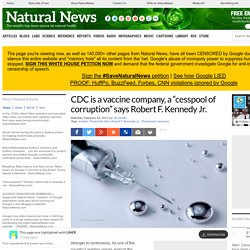 Kennedy, Jr., is no stranger to controversy. As one of the country’s leading voices against the corporatism of medicine and the federal government’s collusion with Big Pharma to bring dangerous, mind- and body-altering drugs to the market in the name of profits, he’s on another crusade today. Joined by Oscar-winning actor Robert De Niro, the pair has teamed up with the World Mercury Project, which Kennedy runs, to reveal the truth about the presence of the heavy metal in vaccines. In an open letter to journalists published by EcoWatch, both men publicized the WMP’s $100,000 challenge to any journalist who can produce a peer-reviewed scientific study to prove that mercury-laced thimerosal, an ingredient in many vaccines, is safe.

Problem loading page. Is There an Anti-Vaccine Shadow Network? - 3 Highlights with LINER. By Dr. 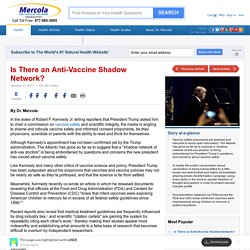 Mercola In the wake of Robert F. Kennedy Jr. telling reporters that President Trump asked him to chair a commission on vaccine safety and scientific integrity, the media is angling to shame and ridicule vaccine safety and informed consent proponents, be they physicians, scientists or parents with the ability to read and think for themselves. Problem loading page. Didn’t Vaccines Eradicate Diseases? An Untold Truth About Vaccines – Collective Evolution. If you’ve been paying attention, you probably know that vaccines have been a huge topic of discussion for a long time now, and a very emotional one as well. 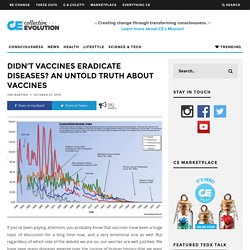 But regardless of which side of the debate we are on, our worries are well justified. We have seen many diseases emerge over the course of human history that we want to protect ourselves and our children from, and so we came up with ways to do that. The challenge is, our methods may have also increased our risk for developing other diseases and health problems, and we need to look at that side of the story. Right off the top, we need to stop looking at it from a pro or anti vaccine stance, relying on blind faith and emotion to support our views. Both sides of the coin use propaganda to bash the other and this actually reduces a very serious conversation to hate fuelled and fact deficient bickering.

Education. The flu shot is loaded with toxins that cause disease. (NaturalHealth365) Spurred on by the relentless urging of government health authorities, over half of the U.S. population currently gets a flu shot. 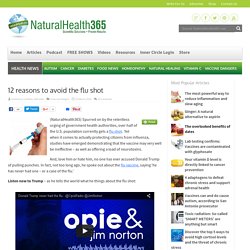 Yet when it comes to actually protecting citizens from influenza, studies have emerged demonstrating that the vaccine may very well be ineffective – as well as offering a load of neurotoxins. And, love him or hate him, no one has ever accused Donald Trump of pulling punches. In fact, not too long ago, he spoke out about the flu vaccine, saying ‘he has never had one – or a case of the flu.’ Listen now to Trump – as he tells the world what he things about the flu shot: As evidence against vaccines accumulates, it turns out there isn’t just one good reason for bypassing that flu shot.

Aluminum and vaccines - Shocking research. (NaturalHealth365) According to the CDC’s own statistics, more than 10 million vaccines are given every year to infants. 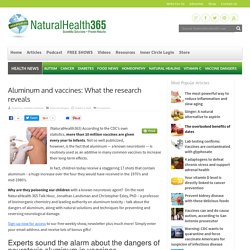 Not so well publicized, however, is the fact that aluminum — a known neurotoxin — is routinely used as an additive in many common vaccines to increase their long-term effects. In fact, children today receive a staggering 17 shots that contain aluminum – a huge increase over the four they would have received in the 1970’s and mid-1980’s. Why are they poisoning our children with a known neurotoxic agent? On the next NaturalHealth 365 Talk Hour, Jonathan Landsman and Christopher Exley, PhD – a professor of bioinorganic chemistry and leading authority on aluminum toxicity – talk about the dangers of aluminum, along with natural solutions and techniques for preventing and reversing neurological damage.

Did Stephen Hawking just admit that certain vaccines are a threat to mankind? Shingles vaccine shown to spread shingles. (NaturalHealth365) The world of vaccines just keeps getting more bizarre, and the reality of vaccine side effects more grim. 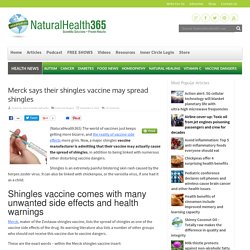 Now, a major shingles vaccine manufacturer is admitting that their vaccine may actually cause the spread of shingles, in addition to being linked with numerous other disturbing vaccine dangers. Obama grants CDC whistleblower immunity for exposing vaccine-autism link. (NaturalNews) Over one year ago, the federal government granted immunity to CDC whistleblower, Dr. William Thompson. Thompson was a senior epidemiologist for the CDC who co-authored and published research on the MMR vaccine back in 2004. In the summer of 2014, Thompson came forward and revealed data linking the MMR vaccine to autism – data that had previously been concealed by the agency.

In 2014, Natural News featured a letter from Dr. CDC Concealed Vaccination-Autism Link. More Than 100 Seniors Died After Receiving This Flu Shot Given By Pharmacies. By Yelena Sukhoterina As it happens every winter, the marketing push for receiving a flu shot continues. CVS is offering a 20% shopping pass when you get your flu shot. They are also marketing a high-dose vaccine, which is of course more profitable for the manufacturer and the pharmacy, but there are plenty of reasons to be wary of it — especially for seniors.

Proof that the vaccine industry never wants a cure for the flu to be made public. (NaturalNews) It's no secret that the flu vaccine has the potential to destroy health and that despite such evidence, the vaccine industry continues to advocate getting one. Depopulation Test Run? 75% Of Children Who Received Vaccines In Mexican Town Now Dead Or Hospitalized. Despite the insidious attempts of the corporate-controlled U.S. media to censor the stories about the deadly side effects of vaccines, the truth keeps surfacing. The latest vaccine tragedy to strike has killed two babies in La Pimienta, Mexico and sent 37 more to the hospital with serious reactions to toxic vaccine additives.

(NaturalNews) The scandalous duplicity of the federal government on important issues like vaccines (unvaccinated children are a threat to the vaccinated, so everyone get vaccinated!) MMR vaccines contain cells from aborted human babies. FLASHBACK: Measles witch hunt: Anti-vax parents burned at the propaganda stake. The vaccine witch hunt is on: Arizona doctor under investigation for not conforming. If vaccines work so well, then why does the science have to be FAKED? Vaccine horrors: Medical mutilation of innocent children exposed in GRAPHIC photos of "safe" vaccines gone horribly wrong.

By Dr. Mercola As a result of today's skyrocketing rates of chronic disease and disability among children, including autism, some scientists are questioning the safety of large-scale vaccination programs. Evolving Whooping Cough Bacteria Outsmarts Vaccines. By Dr. Mercola. Dr. Suzanne Humphries questions vaccine safety. Parents Do Have a Vaccine Alternative. Studies find flu shots can harm your heart, infant and fetus. Chickenpox Vaccine When Mandated INCREASES Disease Outbreak, South. Why flu shots are the greatest medical fraud in history. Flu vaccine kills 13 in Italy; death toll rises. Flu shot paralyzes healthy Florida girl. What Whistleblowers Tell Us About Vaccine Safety & Effectiveness. Why does CDC recommend pregnant women be injected with mercury-filled flu vaccines? What I Wish Everyone Knew About Vaccines. 8 Reasons I Haven't Vaccinated My Daughter.

Historical data shows vaccines are not what saved us.