Flu vaccination ban goes national after fever, convulsions in children. Doctors are being advised to stop giving the flu vaccine to children. 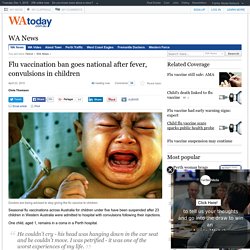 Seasonal flu vaccinations across Australia for children under five have been suspended after 23 children in Western Australia were admitted to hospital with convulsions following their injections. One child, aged 1, remains in a coma in a Perth hospital. He couldn't cry - his head was hanging down in the car seat and he couldn't move. I was petrified - it was one of the worst experiences of my life. Commonwealth chief health officer Professor Jim Bishop yesterday announced the suspension while authorities urgently review data from around the country. WA's chief public health officer Tarun Weeramanthri has defended the response time in closing down the state's juvenile flu vaccine program amid revelations that children were presenting with convulsions more than two weeks ago.

One child remains in a critical condition in hospital after being given the vaccine. Rogue batch may be to blame National warning to GPs. Vaccinate the World: Gates, Rockefeller Seek Global Population Reduction. Old-Thinker News | September 4, 2010 By Daniel Taylor The global elite has launched a world-wide operation against an unaware population to reduce and control fertility. 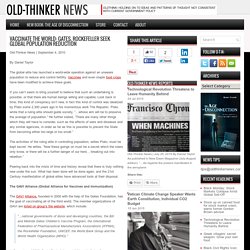 Vaccines and even staple food crops have been modified to achieve these goals. If you can’t seem to bring yourself to believe that such an undertaking is possible, or that there are human beings willing and capable; Look back in time, this kind of conspiracy isn’t new, in fact this kind of control was idealized by Plato some 2,300 years ago in his momentous work The Republic. Plato wrote that a ruling elite should guide society, “…whose aim will be to preserve the average of population.”

The activities of the ruling elite in controlling population, writes Plato, must be kept secret. Peering back into the mists of time and history reveal that there is truly nothing new under the sun. The GAVI Alliance (Global Alliance for Vaccines and Immunization) which include: In December of 2000, David Rockefeller and William H. Related. Jenny McCarthy's Autism Organization. CDC forced to release documents showing they knew vaccine preservative causes autism.

For nearly ten years, Brian Hooker has been requesting documents that are kept under tight wraps by the Centers for Disease Control and Prevention (CDC). 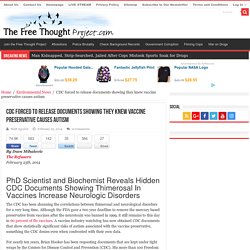 His more than 100 Freedom of Information Act (FOIA) requests have resulted in copious evidence that the vaccine preservative Thimerosal, which is still used in the flu shot that is administered to pregnant women and infants, can cause autism and other neurodevelopmental disorders. Dr. Hooker, a PhD scientist, worked with two members of Congress to craft the letter to the CDC that recently resulted in his obtaining long-awaited data from the CDC, the significance of which is historic. According to Hooker, the data on over 400,000 infants born between 1991 and 1997, which was analyzed by CDC epidemiologist Thomas Verstraeten, MD, “proves unequivocally that in 2000, CDC officials were informed internally of the very high risk of autism, non-organic sleep disorder and speech disorder associated with Thimerosal exposure.” Congress Must Act. Flu Shot Only 59 Percent Effective, Analysis Finds. The review, published in the journal The Lancet, examined the efficacy of the most commonly used flu shot in the United States, the trivalent inactivated vaccine (TIV). 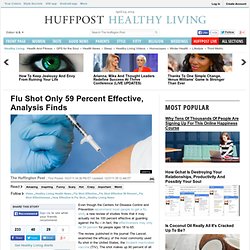 The shot makes up 90 percent of all flu shots given in the U.S., WebMD reported. Their findings differ from the 73 percent effectiveness that was concluded by a review published last year by the Cochrane Collaboration, according to MSNBC. MSNBC reports a possible reason for the discrepancy: A major difference between Osterholm’s meta-analysis [the new review] and the Cochrane reviews is the type of studies they included.

Osterholm's used only studies that confirmed the presence of influenza virus in sick people with either sophisticated polymerase chain reaction technology, or PCR, or laboratory cultures. "The studies we present are the very best studies that we have for the last 70 years," study researcher Michael Osterholm told MSNBC. Flu vaccine barely worked in people 65 and older. This season's flu vaccine was almost completely ineffective in people 65 and older, which could explain why rates of hospitalization and death have been some of the highest ever recorded for that age group, according to early estimates released Thursday by the Centers for Disease Control and Prevention. 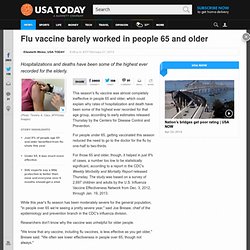 For people under 65, getting vaccinated this season reduced the need to go to the doctor for the flu by one-half to two-thirds. For those 65 and older, though, it helped in just 9% of cases, a number too low to be statistically significant, according to a report in the CDC's Weekly Morbidity and Mortality Report released Thursday. The study was based on a survey of 2,697 children and adults by the U.S. Influenza Vaccine Effectiveness Network from Dec. 3, 2012, through Jan. 19, 2013. Researchers don't know why the vaccine was unhelpful for older people. "We know that any vaccine, including flu vaccines, is less effective as you get older," Bresee said.