Why Are Legislatures Now Imposing "Vaccine Mandates"? I am a veteran of the vaccine war in the US, and today I feel compelled to speak about what I saw in that war. 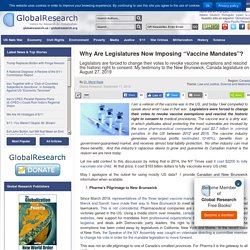 Legislators were forced to change their votes to revoke vaccine exemptions and rescind the historic right to consent to medical procedures. The vaccine war is a dirty war, in which platitudes about protecting the most vulnerable are invoked by the same pharmaceutical companies that paid $2.7 billion in criminal penalties in the US between 2012 and 2015. The vaccine industry generates enormous profits (estimated 10-40%), benefits from a government-guaranteed market, and receives almost total liability protection.

No other industry can rival these benefits. And this industry’s rapacious desire to grow and guarantee its Canadian market is the reason we are here today. No Enigma: Vaccines and the Food Allergy Epidemic. Did a Military Experimental Vaccine in 1918 Kill 100 Million People Blamed as “Spanish Flu”? Infanrix Hexa – 65 Toxins Found. All Risk. No Benefit. CDC Data Reanalysis Shows Strong, Statistically Significant Relationship Between MMR Vaccine & Autism. International scientists have found autism's cause. What will Americans do? — j.b. handley blog. The use of mercury in a vaccine seems insane to most rational people given the extreme neurotoxicity of mercury, which has been demonstrated in hundreds of published studies.We’ve learned that vaccine mercury travels straight to the brain of monkeys, that it depletes glutathione, a vital antioxidant, that it blocks critical pathways in methylation, and that mice injected with Thimerosal exhibit behaviors similar to autism. 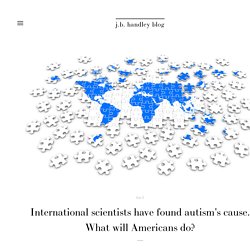 Thimerosal has been removed from most pediatric vaccines (beginning in 2002), but in an odd development, started being injected into pregnant women in 2004, when the flu shot (of which a portion contain thimerosal) was recommended for the first time by the CDC for pregnant women. So, does this article abandon the mercury-autism hypothesis? My personal answer is complex: Mercury in vaccines is dangerous and unjustifiable based on published science. Studies - Learn The Risk. Autism & Vaccine Studies A Positive Association found between Autism Prevalence and Childhood Vaccination uptake across the U.S. 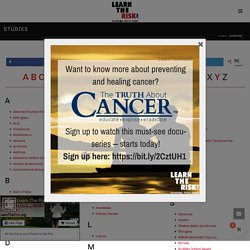 Population. Journal of Toxicology and Environmental Health, 2011. Vaccinated vs. Unvaccinated: Mawson Homeschooled Study Reveals Who is Sicker. It’s never been done before.The first-of-its-kind study of vaccinated vs. unvaccinated American homeschooled children shows who is really ailing…and parents should be worried Something is wrong with America’s children. 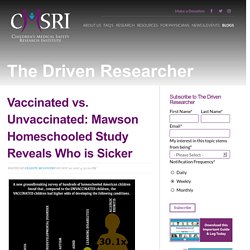 They are sick – allergic, asthmatic, anxious, autoimmune, autistic, hyperactive, distracted and learning disabled. Thirty-two million American children – a full 43% of them – suffer from at least one of 20 chronic illnesses not including obesity. Across the board, once rare pediatric disorders from autism and ADD to Type 1 diabetes and Tourette’s syndrome are soaring, though few studies pool the data.

Compared to their parents, children today are four times more likely to have a chronic illness. Spanish sheep study finds vaccine aluminum in lymph nodes more than a year after injection, behavioural changes - Ghost Ship Media. Ghost Ship Media Lambs injected with vaccines and a key ingredient in many vaccines develop numerous pouches of the toxic metal that spread around their body for at least 15 months and induce behaviour changes, long after the shot, according to a study published this week by Spanish veterinary researchers. 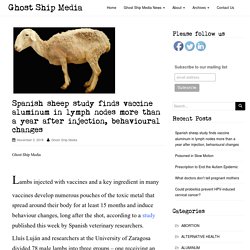 Lluís Luján and researchers at the University of Zaragosa divided 78 male lambs into three groups – one receiving an accelerated vaccine schedule for sheep of 19 injections over 15 months, one receiving aluminum salts commonly added to vaccines to provoke an immune response and one group receiving a saline control. Universal reaction. What the News Isn’t Saying About Vaccine-Autism Studies. This story was updated Nov. 27, 2016 to add results of new survey of vaccinated vs. unvaccinated children [The following news analysis and commentary was first published Dec. 31, 2015] A new study this week found no link between vaccines and autism. 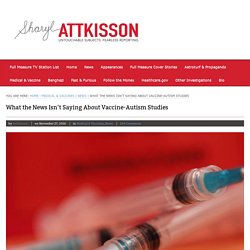 It instantly made headlines on TV news and popular media everywhere. Many billed it as the final word, “once again,” disproving the notion that vaccines could have anything to do with autism. What you didn’t learn on the news was that the study was from a consulting firm that lists major vaccine makers among its clients: The Lewin Group. That potential conflict of interest was not disclosed in the paper published in The New England Journal of Medicine; the study authors simply declare “The Lewin Group operates with editorial independence.” 18 Things You Don’t Know About Polio. 1. 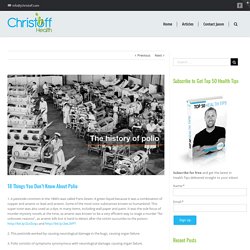 A pesticide common in the 1800’s was called Paris Green. A green liquid because it was a combination of copper and arsenic or lead and arsenic. Some of the most toxic substances known to humankind. This super toxin was also used as a dye, in many items, including wall paper and paint. It was the sole focus of murder mystery novels at the time, as arsenic was known to be a very efficient way to stage a murder “for unknown reasons”, as arsenic kills but is hard to detect after the victim succumbs to the poison.

Your browser isn't supported. Your browser isn't supported. How Much of Our Cancer Epidemic is Due to SV-40? By PAUL FASSA In 1972 Bernice Eddy, a top NIH (National Institutes of Health) government agency scientist warned, “If you continue to allow these contaminated [polio] vaccines to go out, I guarantee you that over the next 20 years you will have epidemics of cancer unlike the world has ever seen.” 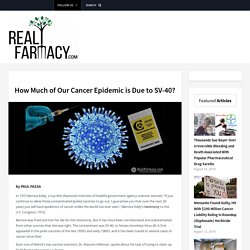 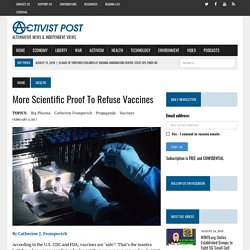 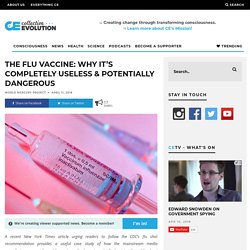 Become a member! A recent New York Times article urging readers to follow the CDC’s flu shot recommendation provides a useful case study of how the mainstream media manufacture consent for public vaccine policy by systematically deceiving the public about what the science says. By Jeremy R. Acetaminophen (paracetamol) use, measles-mumps-rubella vaccination, and autistic disorder: the results of a parent survey. - PubMed - NCBI. Landmark Study Establishes Link Between the Aluminum in Most Vaccines & Autism. It is no question that the subject of vaccines is profoundly controversial. On both sides of the argument exists truth and lies that can hinder the ability of some to make rational decisions. While we have everyone from attorneys to biologists, to political scientists who write for the Free Thought Project, none of us are doctors, so we do not make recommendations about what you and your family should do in regards to vaccination.

That being said, when we see critical information about vaccines that fails to be covered in the mainstream media, we will cover it every time. This is one of those times. A peer-reviewed study published online this week and set to be published in the December volume of the Journal of Inorganic Biochemistry, conducted by scientists at the University of British Columbia, has established a link between a popular aluminum vaccine ingredient and autism. First Vaccinated Versus Nonvaccinated Peer Review Study Published. By Catherine J. Frompovich | Activist Post Finally, it’s happened; the first vaccinated versus nonvaccinated children’s health peer review study has been published in the Journal of Translational Science [1].

The study titled “Pilot comparative study on the health of vaccinated and unvaccinated 6- to 12- year old U.S. children” is published as an open access text, thankfully, which everyone—bar none—should read, especially if you are a parent or grandparent. With 71 References and nine charts, it clearly represents documented proof of what the authors were able to ascertain, when in the Conclusions they state: Assessment of the long-term effects of the vaccination schedule on morbidity and mortality has been limited [71]. Harvard Immunologist Demolishes Mandatory Vaccination Logic - Vaxxter. New CDC Research Debunks Agency's Assertion That Mercury in Vaccines Is Safe. The U.S. Environmental Protection Agency (EPA) and U.S. Food and Drug Administration (FDA) once again advised pregnant women to curb consumption of fish in order to limit fetal exposures to neurotoxic mercury. Alkyl Mercury-Induced Toxicity: Multiple Mechanisms of Action.

There are a number of mechanisms by which alkylmercury compounds cause toxic action in the body. Collectively, published studies reveal that there are some similarities between the mechanisms of the toxic action of the mono-alkyl mercury compounds methylmercury (MeHg) and ethylmercury (EtHg). This paper represents a summary of some of the studies regarding these mechanisms of action in order to facilitate the understanding of the many varied effects of alkylmercurials in the human body. The similarities in mechanisms of toxicity for MeHg and EtHg are presented and compared. The difference in manifested toxicity of MeHg and EtHg are likely the result of the differences in exposure, metabolism, and elimination from the body, rather than differences in mechanisms of action between the two.

Keywords. Pratt. The Vaccine Research Library. Peerrevieuw.vaxxine.100yearstudy. 110915 PGKReviewOfUSSubmissionToUNEP b. Thimerosal Immune System Abnormalities. Thimerosal-Derived Ethylmercury Is a Mitochondrial Toxin in Human Astrocytes: Possible Role of Fenton Chemistry in the Oxidation and Breakage of mtDNA. American College of Pediatricians warns: HPV vaccine causes ovarian failure. First Study on Vaccinated vs. Unvaccinated Children Pulled from Web. Christina Sarich, Staff WriterWaking Times The results of the first ever study comparing the health of vaccinated children vs. unvaccinated children is out, and they are already causing controversy.

New Concerns about the Human Papillomavirus Vaccine. American College of Pediatricians – January 2016 The American College of Pediatricians (The College) is committed to the health and well-being of children, including prevention of disease by vaccines. Results Illnesses. Three dozen dead macaque monkeys later: Vaccines still don’t cause autism. Antivaccine activists fund a study to show vaccines cause autism. It backfires spectacularly.

Aluminum Vaccine Adjuvants: Are they Safe? Tomljenovic_Shaw-CMC-published.pdf. Lucija-Tomljenovic-PhD-letter. Inflammatory responses to trivalent influenza virus vaccine among pregnant women. This Might Make You Think Twice About Injecting Your Child With Gardasil. Vaccines to prevent influenza in healthy adults. Association between the 2008-09 seasonal influenza vaccine and pandemic H1N1 illness during Spring-Summer 2009: four observational studies from Can... Children In Europe Develop Narcolepsy After Receiving H1N1 Pandemrix Vaccine.