Romina Libster: The power of herd immunity. Vaccines: Vac-Gen/Why Immunize? CDC: Vaccines save hundreds of thousands of lives. Vaccines given to infants and young children over the past two decades will prevent 322 million illnesses, 21 million hospitalizations and 732,000 deaths over the course of their lifetimes, according to a new report from the Centers for Disease Control and Prevention. 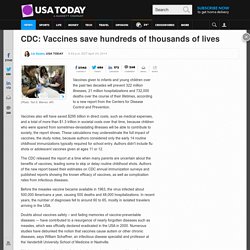 Vaccines also will have saved $295 billion in direct costs, such as medical expenses, and a total of more than $1.3 trillion in societal costs over that time, because children who were spared from sometimes-devastating illnesses will be able to contribute to society, the report shows. These calculations may underestimate the full impact of vaccines, the study notes, because authors considered only the early 14 routine childhood immunizations typically required for school entry. Authors didn't include flu shots or adolescent vaccines given at ages 11 or 12. Vaccine Infographic on Behance.

Parents' fear of vaccinations nearly killed their son - ABC Perth - Australian Broadcasting Corporation. "The mistake that we made was that we underestimated the diseases and we totally over-estimated the adverse reactions", says father Ian Williams, who is speaking publicly of his family's ordeal in an effort to warn other parents about the dangers of not immunising their children. 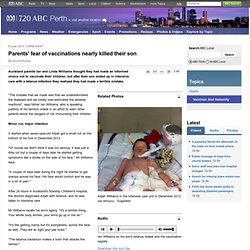 Minor cut, major infection It started when seven-year-old Alijah got a small cut on the bottom of his foot in December 2012. "Of course we didn't think it was too serious, it was just a little cut but a couple of days later he started getting symptoms like a stroke on the side of his face," Mr Williams says. "A couple of days later during the night he started to get cramps across his face. His face would contort and he was in a lot of pain. " After 24 hours in Auckland's Starship Children's hospital, the doctors diagnosed Alijah with tetanus, and he was taken to intensive care. Mr Williams recalls his son's agony, "It's a terrible thing...

"It's like getting cramp but it's everywhere, across the face as well. An Epidemic of Fear: How Panicked Parents Skipping Shots Endangers Us All. Photo: Andrew Zuckerman To hear his enemies talk, you might think Paul Offit is the most hated man in America. 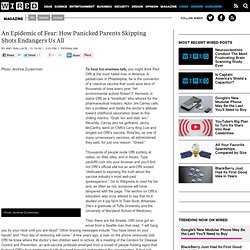 A pediatrician in Philadelphia, he is the coinventor of a rotavirus vaccine that could save tens of thousands of lives every year. Yet environmental activist Robert F. Kennedy Jr. slams Offit as a “biostitute” who whores for the pharmaceutical industry. The New Pandemic of Vaccine Phobia. We no longer believe that witches control the weather or inhabit the souls of adolescent girls. 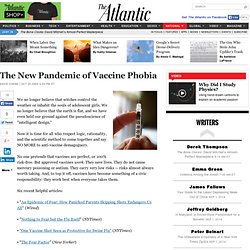 We no longer believe that the earth is flat, and we have even held our ground against the pseudoscience of "intelligent design. " Now it is time for all who respect logic, rationality, and the scientific method to come together and say NO MORE to anti-vaccine demagoguery. No one pretends that vaccines are perfect, or 100% risk-free. But approved vaccines work. They save lives. Six recent helpful articles:

#1: Vaccine Phobia Becomes a Public-Health Threat. The question will not go away: Do vaccines cause autism? 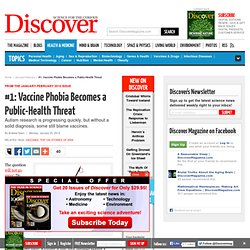 Some 1 million to 1.5 million adults and children in the United States have received autism diagnoses, and there is no clear insight into its causes. What surprises many scientists is that their findings against a vaccine connection keep failing to quell the debate, giving the antivaccine movement the potential to become a genuine public-health problem. In February the U.S. Court of Federal Claims attempted to provide some clarity, ruling that a widely used vaccine and a vaccine preservative, both targets of concern over the past decade, do not cause autism spectrum disorders. That decision put a stamp of approval on what multiple peer-reviewed studies have concluded for years: The MMR (measles-mumps-rubella) vaccine and the mercury additive thimerosal (which was removed from nearly all vaccines by 2001) are not responsible for the rise in autism diagnoses. Vaccinophobia - vaccine fear, vaccines fear, vaccination fear, vaccine phobia, vaccines phobia, vaccination phobia, fear of vaccines, phobia of vaccines.

In order to provide good information on Vaccinophobia it is best to first understand what a phobia is. 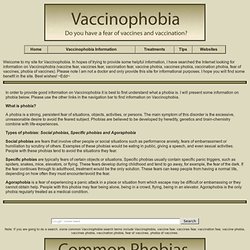 I will present some information on phobia below. Please use the other links in the navigation bar to find information on Vaccinophobia. Map: Vaccine-Preventable Outbreaks. This interactive map visually plots global outbreaks of measles, mumps, whooping cough, polio, rubella, and other diseases that are easily preventable by inexpensive and effective vaccines. 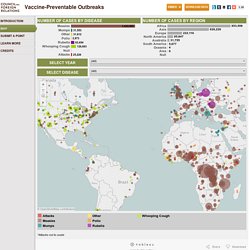 Red triangles indicate attacks on vaccinators and healthcare workers, as well as announcements from both governments and non-state actors that have had an impact—either positive or negative—on the successful implementation of vaccination programs. The Global Health Program at the Council on Foreign Relations has been tracking reports by news media, governments, and the global health community on these outbreaks since the fall of 2008. This project aims to promote awareness of a global health problem that is easily preventable, and examine the factors that threaten the success of eradicating preventable illnesses such as polio. Learn more about Global Health. Why Vaccinate: Vaccines.com. Pinkbook: Index - Epidemiology of Vaccine-Preventable Diseases. The Pink Book: Course Textbook 12th Edition Second Printing (May 2012) Note: Changes were made to the 12th Edition, 2nd Printing in May. 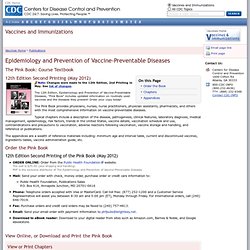