Long Distance TLC. Neal coughed into his pillow and then burrowed under the covers, seeking warmth and darkness. 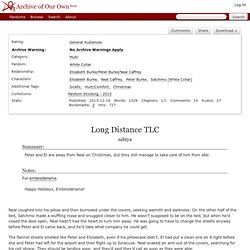 On the other half of the bed, Satchmo made a wuffling noise and snuggled closer to him. He wasn’t supposed to be on the bed, but when he’d nosed the door open, Neal hadn’t had the heart to turn him away. Warmth Enough - sahiya - White Collar. After close to fifteen years of marriage, Peter knew what to do when El was sick. 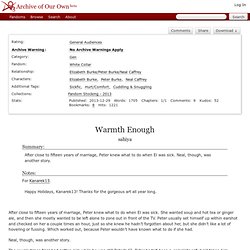 She wanted soup and hot tea or ginger ale, and then she mostly wanted to be left alone to zone out in front of the TV. Peter usually set himself up within earshot and checked on her a couple times an hour, just so she knew he hadn’t forgotten about her, but she didn’t like a lot of hovering or fussing. The Christmas Curse - sahiya - White Collar. “The year that Christmas was cursed,” they called it later, but with a smile. 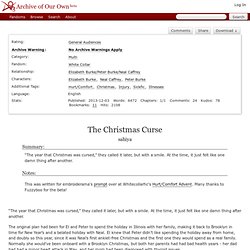 At the time, it just felt like one damn thing after another. The original plan had been for El and Peter to spend the holiday in Illinois with her family, making it back to Brooklyn in time for New Year’s and a belated holiday with Neal. Chrysalis. Out in the Cold. Title: Out in the ColdRating: PG-13Pairing: Neal/Peter/El (established)Wordcount: 8,078Spoilers: Don't think so. 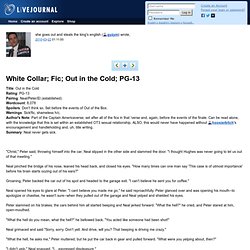 Set before the events of Out of the Box.Warnings: Sick! Fic, shameless h/c.Author's Note: Part of the Captain Americaverse; set after all of the fics in that 'verse and, again, before the events of the finale. Can be read alone, with the knowledge that this is set within an established OT3 sexual relationship. Fourth Time's A Charm. Peter was in the middle of shaving when El slid behind him, reaching for her curling iron with one hand and offering Peter his phone with the other. 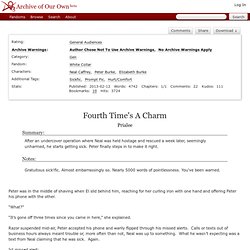 “What?” “It’s gone off three times since you came in here,” she explained. Razor suspended mid-air, Peter accepted his phone and warily flipped through his missed alerts. Calls or texts out of business hours always meant trouble or, more often than not, Neal was up to something. Believable - lionessvalenti - White Collar. "Is Neal still in bed? 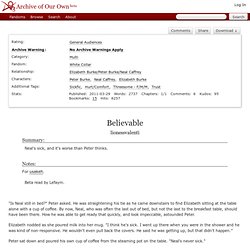 " Peter asked. He was straightening his tie as he came downstairs to find Elizabeth sitting at the table alone with a cup of coffee. By now, Neal, who was often the last out of bed, but not the last to the breakfast table, should have been there. How he was able to get ready that quickly, and look impeccable, astounded Peter.

Elizabeth nodded as she poured milk into her mug. Peter sat down and poured his own cup of coffee from the steaming pot on the table. "No one is never sick. "Maybe," Peter replied. Elizabeth eyed him. A Practical Woman. Elizabeth Burke was, in many ways, more practical than her husband. 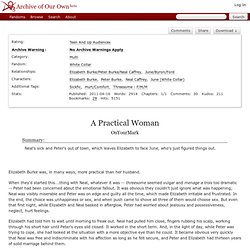 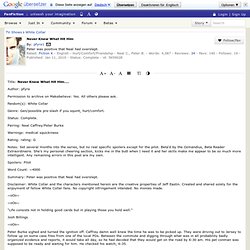 Author: pfyre Permission to archive on Makebelieve: Yes. All others please ask. Fandom(s): White Collar Genre: Gen/possible pre-slash if you squint, hurt/comfort. Status: Complete. Close Quarters. Neal had been coughing as if to hack up a lung since he'd walked into the office Monday morning—and if he thought Peter was still oblivious to the fact that he was sick, then his brain had to be as congested as his lungs sounded. 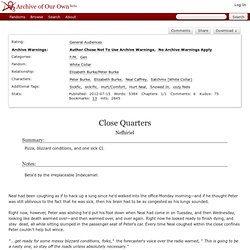 Right now, however, Peter was wishing he'd put his foot down when Neal had come in on Tuesday, and then Wednesday, looking like death warmed over—and then warmed over, and over again. Right now he looked ready to finish dying, and stay dead, all while sitting slumped in the passenger seat of Peter's car. Every time Neal coughed within the close confines Peter couldn't help but wince. "...get ready for some messy blizzard conditions, folks," the forecaster's voice over the radio warned, " This is going to be a nasty one, so stay off the roads unless absolutely necessary. " Peter pulled to a halt at a stoplight, noting with a sidelong glance the flush that had crept into Neal's face. My Hero. "My hero" Chapter One This is a translated story of mine: "Weekeinde met held" Thank you very much, Melles, for your translating:D Hope you Enjoy! 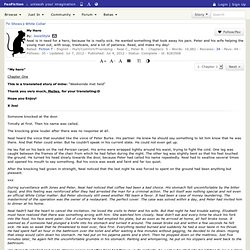 X Josi Someone knocked at the door. Timidly at first. The knocking grew louder after there was no response at all. Neal heard the voice that sounded like the voice of Peter Burke. He lay flat on his back on the red Persian carpet. A Fevered Panic. Title: A Fevered PanicAuthor: embroideramaRating: PGPairing: Neal & Peter genWord count: 1,670Spoilers: early S1Warnings: noneSummary: Neal doesn't get sick, except for when he does.

This time, the flu bug going around the office takes him by surprise. Notes: This was written for azertynin's prompt in the Running Hot III fic meme. If anybody asked, which nobody ever did, Neal would be happy to boast that he has an excellent immune system. The downside was that, on those rare occasions when the seasonal bug was big enough and bad enough to avoid instant death at the hands of Neal's immune system, the experience of being the battleground where his body enthusiastically fought off the illness wasn't good.