Problem loading page. Are You Taking This Dangerous Antibiotic? Martha Rosenberg, AlternetWaking Times “I was given the antibiotic Levaquin. 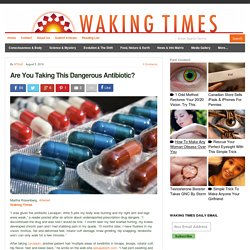 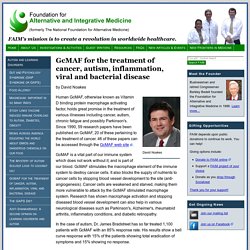 Since 1990, 59 research papers have been published on GcMAF, 20 of these pertaining to the treatment of cancer. 46 of these papers can be accessed through the GcMAF web site. GcMAF is a vital part of our immune system which does not work without it; and is part of our blood. GcMAF stimulates the macrophage element of the immune system to destroy cancer cells.

In the case of autism, Dr. In addition, experimental and clinical evidence confirms that GcMAF shows multiple powerful anti-cancer effects that have significant therapeutical impact on most tumors including breast, prostate, and kidney. The-dark-side-of-gardasil/ Ashley, I am glad you found out what caused your health issues. I would like to provide you with some diet that will reverse it all, naturally and you will never have to take medicine again. But it will take time and discipline. I am going to post it here (try), if I am unable to post it here due to large size, please email me to khaines042000@yahoo.com and I will share my diet with you gladly. Human Studies Condemn Ultrasound. Dr. 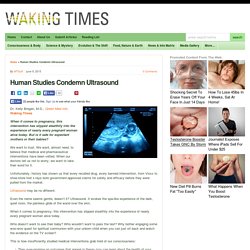 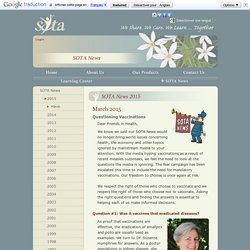 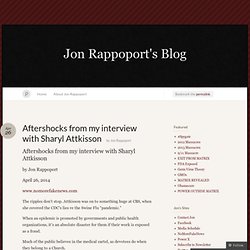 New Water Treatment for Removal of Fluoride Discovered by Researchers. Written by The Informed Aussie Published on Tuesday, April 23rd, 2013 Globalist Report AN exciting and new water treatment breakthrough has been announced that will now make the removal of fluoride from the drinking water supplies of the world’s poorest people more affordable than ever. 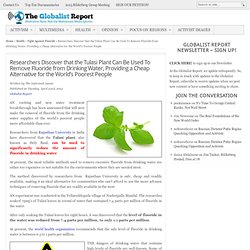 Researchers from Rajasthan University in India have discovered that the Tulasi plant, also known as Holy Basil, can be used to significantly reduce the amount of fluoride in drinking water. At present, the most reliable methods used to remove excessive fluoride from drinking water are either too expensive or not suitable for the environments where they are needed most. 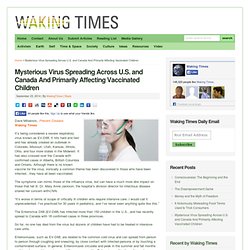 It hits hard and fast and has already created an outbreak in Colorado, Missouri, Utah, Kansas, Illinois, Ohio, and four more states in the Midwest. It has also crossed over the Canada with confirmed cases in Alberta, British Columbia and Ontario. Although there is no known vaccine for the virus, ironically a common theme has been discovered in those who have been infected…they have all been vaccinated. Two Popular Foods May Turn Immune System Against Brain. Sayer Ji, GreenMedInfoWaking Times A new study published in the open access journal Nutrients titled, “The Prevalence of Antibodies against Wheat and Milk Proteins in Blood Donors and Their Contribution to Neuroimmune Reactivities,” implicates two of the Western world’s most popular foods in various forms of immune-mediated brain damage and dysfunction, including gluten ataxia and multiple sclerosis. 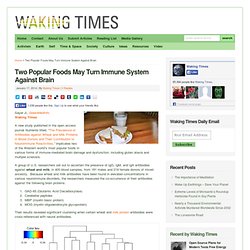 A group of U.S. researchers set out to ascertain the presence of IgG, IgM, and IgA antibodies against wheat and milk, in 400 blood samples, from 181 males and 219 female donors of mixed ancestry. Because wheat and milk antibodies have been found in elevated concentrations in various neuroimmune disorders, the researchers measured the co-occurrence of their antibodies against the following brain proteins: GAD-65 (Glutamic Acid Decarboxylase)Cerebellar peptidesMBP (myelin basic protein)MOG (myelin oligodendrocyte glycoprotein) The results were reported in the study abstract as follows: Sources: Natural News ~ Glyphosate contamination will cause 50% of children to be autistic by 2025, according to researcher. It’s not just about the GMOs themselves, but what goes along with them, namely toxic chemicals and gut-destroying pathogens. 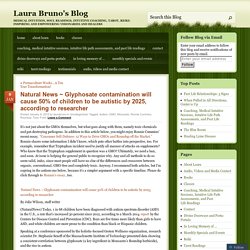 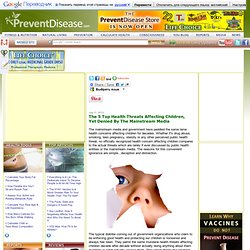 Whether it's drug abuse, smoking, teen pregnancy, obesity or any other perceived public health threat, no officially recognized health concern affecting children compares to the actual threats which are rarely if ever discussed by public health entities or the mainstream media. The reasons for this convenient ignorance are simple...deception and distraction. The typical diatribe coming out of government organizations who claim to be enforcing good health and protecting our children is nonsense and always has been. According to the KIGGS study more than 40% of children between the ages of 3 and 17 years were sensitized against at least one allergen tested (20 common allergens were tested) and 22.9% had an allergic disease. I'M sharing this. Use these tips to detox after exposure to aerial or ground sprayed pesticides Wednesday, August 22, 2012 by: Tony Isaacs 369 [Share this Article](NaturalNews) If you live in an area which is being blanketed with aerial or ground spraying of pesticides for mosquitoes, it is virtually impossible to completely avoid exposure.

However, there is plenty you can do to help get the pesticides out of your body and offset their effects. Tips for eliminating pesticides from the bodyMost toxins are eliminated in bile via the liver. In addition to commercial cleansing products, a wide variety of foods, supplements and healthy practices can help flush and eliminate pesticides and other toxins from the liver, gall bladder, colon, kidneys and blood: * Glutathione is the body's natural detoxifier which enables the liver to remove toxins from the body. . * One "must have" item is milk thistle, which is wonderful for overall liver health as well as a great detoxifier. Inventor of ADHD: “ADHD is a fictitious disease” By Moritz Nestor Fortunately, the Swiss National Advisory Commission on Biomedical Ethics (NEK, President: Otfried Höffe) critically commented on the use of the ADHD drug Ritalin in its opinion of 22 November 2011 titled Human enhancement by means of pharmacological agents 1 : The consumption of pharmacological agents altered the child’s behavior without any contribution on his or her part.

That amounted to interference in the child’s freedom and personal rights, because pharmacological agents induced behavioral changes but failed to educate the child on how to achieve these behavioral changes independently. The child was thus deprived of an essential learning experience to act autonomously and emphatically which “considerably curtails children’s freedom and impairs their personality development”, the NEK criticized.