How Plumbing (Not Vaccines) Eradicated Disease. White House admits staging fake vaccination operation to gather DNA from the public. Learn The Risk. Holistic Vaccine Detox Protocol For Babies & Children. I am a member of several Natural Parenting Facebook Groups and this is one topic that comes up almost every single day so I decided to publish this post on my Blog (its actually a part of my New eBook “The Crunchy Kid-Holistic Remedies For Babies and Children” and I finished writing this chapter today). 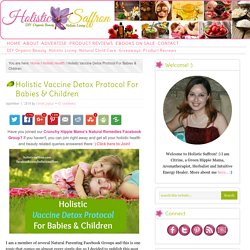 You can join our Facebook Group to network with like minded Mamas if you need any kind of support. Vaccinating or not vaccinating is your choice as parents and all I would like to say is do your research properly before you choose the vaccine route. You can always vaccinate later but you can’t undo it. Yes, you can detox and flush out the toxins but its not always 100% fool proof. We can only control certain amount of damage done.

Have you ever wondered what happens when your child gets injected 49 shots of 14 different vaccines before age 6? Vaccinations: A Thoughtful Parent’s Guide: How to Make Safe, Sensible Decisions about the Risks, Benefits, and Alternatives DTaP Vaccine Ingredients: Fired over a flu shot: Office workers let go after refusing vaccine or surgical mask – Bought Movie. You’ve likely heard of the hotly contested California mandate that was signed into law this year requiring the vaccination of all children in the state in order to attend public school. 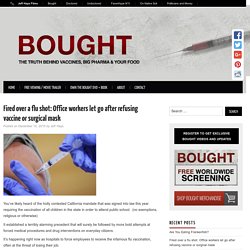 (no exemptions, religious or otherwise) It established a terribly alarming precedent that will surely be followed by more bold attempts at forced medical procedures and drug interventions on everyday citizens. It’s happening right now as hospitals to force employees to receive the infamous flu vaccination, often at the threat of losing their job. I am amazed by the solidarity these strong willed people have shown.

Read the full article below. A New Jersey social service agency has followed through with its threat to fire three office workers over their refusal to get a flu shot or, as an alternative, wear a surgical mask while in the company’s Burlington Township headquarters, an attorney for the women said. The Drug Trust - History of The Pharmaceutical Drug Business. By Eustace Mullins from "Murder by Injection - The Story of the Medical Conspiracy Against America" 1988 In 1987, the eighteen largest drug firms were ranked as follows: Merck (U.S.) $4.2 billion in sales. 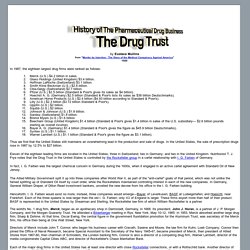 Glaxo Holdings (United Kingdom) $3.4 billion. Hoffman LaRoche (Switzerland) $3.1 billion. Thus we find that the United States still maintains an overwhelming lead in the production and sale of drugs. Eleven of the eighteen leading firms are located in the United States; three in Switzerland; two in Germany; and two in the United Kingdom. In fact, I. The Allied Military Government split it up into three companies after World War II, as part of the "anti-cartel" goals of that period, which was not unlike the famed splitting up of Standard Oil itself by court order, while the Rockefellers maintained controlling interest in each of the new companies. Bloggingnetworkonline. Firstly, I’ll say, I’ve put YOUR simply to get more people to look at this as if I put OUR, it absolves some of looking and potentially absolving all responsibility. 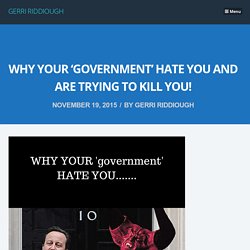 NOT because I’m any different! We are ALL EQUAL!! A few years ago my life had taken a turn I really didn’t like, nor want! Everything was about as bad as I could ever ‘imagine!!!’ I wrote about it here:- Universal Law and how it works!!!!! Human beings are incredibly powerful beings and have a power over your own lives, I include me here as I’m in a human body with the same abilities, possibly more so but that means I’ve used that power AGAINST myself due to taking on the FEAR they blast everywhere! Extortionate lengths have had to be gone to in order to hinder the abilities of all of us! Some of the things they have done is Fluoride added to the water supply – this does many things including rot the teeth to cause brain damage, ill health and more! 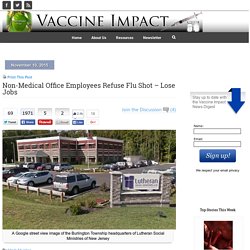 Once there, they expect to be fired. The three women — employees of Lutheran Social Ministries of New Jersey, an agency that helps the elderly and the disadvantaged throughout the state — are among a rising number of workers facing termination for refusing to get a flu shot or, as an alternative, wear a surgical mask in the workplace. What differentiates Duncan, Watson and Mercurius from most of those fired, however, is that they’re not doctors or nurses, and they don’t work in a hospital. “This is insane,” said Watson, 36, a Willingboro resident who says she desperately needs her job to support her four children. Read the Full Story at NJ.com. See Also: eBook – Available for immediate download. Dr. Read: THE SILENT WAR BEING WAGED ON OUR CHILDREN.