Health Impact News. Vaccine World Summit. I need some vaccine advice. - January 2015 Babies - WhatToExpect.com. Parents who choose not to vaccinate their children and protect them with vaccine exemption forms are often chastised and stereotyped for putting their own kids at risk. 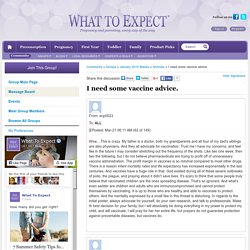 But what is even stranger than this assault on individual freedom and informed choice, is that these concerned parents are attacked for putting vaccinated children at risk. These attacks are based on the theory of “herd immunity.” This hypothesis was plucked out of an old college textbook. It states that the more people are immune to an infectious agent, the less likely an immune-compromised individual is to come in contact with it.

In other words herd immunity serves as a human shield – a type of immunity – for “at-risk” individuals. When outbreaks arise among children, health officials are quick to state that it’s due to a breakdown in ‘herd immunity.‘ Doctors parrot it too, without even looking at the research. This is fuzzy logic. After all, if vaccines truly worked, then why would vaccinated kids be at risk? • Autism. Vaccine Failure Report Wall - NVIC. Study Is Unsure on Tainted Polio Vaccine's Cancer Role. The polio vaccine used in the United States from 1955 to 1963 has long been known to have been contaminated with a cancer-causing monkey virus, but even after years of study it is not clear whether the vaccine is linked to any cancers in people, scientists reported yesterday. 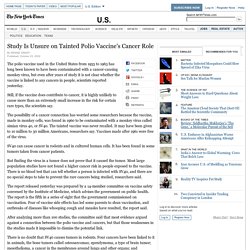 Still, if the vaccine does contribute to cancer, it is highly unlikely to cause more than an extremely small increase in the risk for certain rare types, the scientists say. The possibility of a cancer connection has worried some researchers because the vaccine, made in monkey cells, was found in 1960 to be contaminated with a monkey virus called simian virus 40, or SV40. The tainted vaccine was never recalled. It may have been given to 10 million to 30 million Americans, researchers say. Vaccines made after 1961 were free of the virus. SV40 can cause cancer in rodents and in cultured human cells. Last Week Tonight with John Oliver: Scientific Studies (HBO) Why government-funded science leads to science fraud (Audio) 6 Reasons Why Most Scientific Research is Fake, False or Fraudulent. Christina Sarich, StaffWaking Times How often do scientists smugly quote the latest research on a topic only later to be made the fool by insider revelations that published research in peer-reviewed journals is abjectly false? 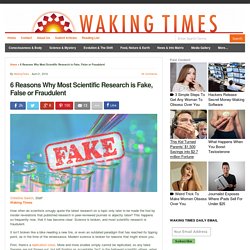 This happens so frequently now, that it has become clear: Science is broken, and most scientific research is fraudulent. It isn’t broken like a bike needing a new tire, or even an outdated paradigm that has reached its tipping point, as in the time of the renaissance. Modern science is broken for reasons that might shock you. First, there’s a replication crisis. Take for example a recent review of 67 blockbuster drug discovery research findings published in prestigious journals. Why the gross negligence in a field that has been heralded as sacrosanct? Science has even discredited itself – in one study meant to hoodwink the very prestigious British Medical Journal, a paper with eight major errors was submitted. The History of the Pharma-Cartel. 1911, May 15 The Supreme Court of the U.S. finds John Rockefeller and his Trust guilty of corruption, illegal business practices and racketeering. 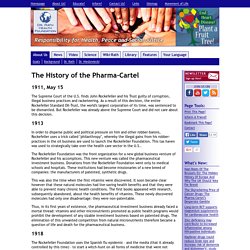 As a result of this decision, the entire Rockefeller Standard Oil-Trust, the world's largest corporation of its time, was sentenced to be dismantled. But Rockefeller was already above the Supreme Court and did not care about this decision. In order to disperse public and political pressure on him and other robber-barons, Rockefeller uses a trick called "philanthropy", whereby the illegal gains from his robber-practices in the oil business are used to launch the Rockefeller Foundation.

This tax haven was used to strategically take over the health care sector in the U.S.. The Rockefeller Foundation was the front organization for a new global business venture of Rockefeller and his accomplices. This was also the time when the first vitamins were discovered. 1929, November 29 The Rockefeller cartel (U.S.A.) and the I.G. The I.G. Academics ‘regularly lie to get research grants’ Academics routinely lie and exaggerate when telling funding agencies what impact their research will have, a series of candid interviews with scholars in the UK and Australia has suggested. 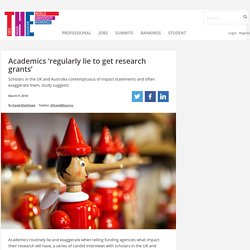 Their dismissive comments about the “charade” of impact statements brings to light what appears to be an open secret in academia – that academics simply do not take such projections seriously. A new study anonymously interviewed 50 senior academics from two research-intensive universities – one in the UK and one in Australia – who had experience writing "pathways to impact" (PIS) statements, as they are called in the UK, and in some cases had also reviewed such statements. It was normal to sensationalise and embellish impact claims, the study published in Studies in Higher Education found. In the UK and Australia, academics are asked for evidence of what impact their research might have when applying for grants. Behind the Veil: Conflicts of Interest and Fraud in Medical Research.