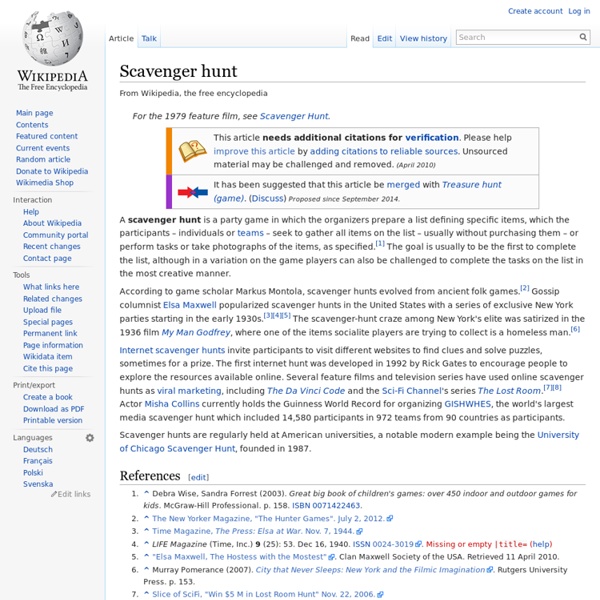 A scavenger hunt is a party game in which the organizers prepare a list defining specific items, which the participants – individuals or teams – seek to gather all items on the list – usually without purchasing them – or perform tasks or take photographs of the items, as specified.[1] The goal is usually to be the first to complete the list, although in a variation on the game players can also be challenged to complete the tasks on the list in the most creative manner. According to game scholar Markus Montola, scavenger hunts evolved from ancient folk games.[2] Gossip columnist Elsa Maxwell popularized scavenger hunts in the United States with a series of exclusive New York parties starting in the early 1930s.[3][4][5] The scavenger-hunt craze among New York's elite was satirized in the 1936 film My Man Godfrey, where one of the items socialite players are trying to collect is a homeless man.[6]

Map projection More generally, the surfaces of planetary bodies can be mapped even if they are too irregular to be modeled well with a sphere or ellipsoid; see below. Even more generally, projections are the subject of several pure mathematical fields, including differential geometry and projective geometry. However "map projection" refers specifically to a cartographic projection. Background[edit] Maps can be more useful than globes in many situations: they are more compact and easier to store; they readily accommodate an enormous range of scales; they are viewed easily on computer displays; they can facilitate measuring properties of the terrain being mapped; they can show larger portions of the Earth's surface at once; and they are cheaper to produce and transport. However, Carl Friedrich Gauss's Theorema Egregium proved that a sphere's surface cannot be represented on a plane without distortion. For simplicity most of this article assumes that the surface to be mapped is that of a sphere.

Textbook A textbook or coursebook (UK English) is a manual of instruction in any branch of study. Textbooks are produced according to the demands of educational institutions. Schoolbooks are textbooks and other books used in schools.[1][2] Although most textbooks are only published in printed format, many are now available as online electronic books. History[edit] The ancient Greeks wrote texts intended for education. The Greek philosopher Socrates (469–399 B.C.) lamented the loss of knowledge because the media of transmission were changing.[3] Before the invention of the Greek alphabet 2,500 years ago, knowledge and stories were recited aloud, much like Homer's epic poems. The next revolution for books came with the 15th-century invention of printing with changeable type. Compulsory education and the subsequent growth of schooling in Europe led to the printing of many standardized texts for children. Technological advances change the way people interact with textbooks. Market[edit] Bundling[edit]

Fundamentals of Mapping Some Commonly Used Map Projections This section outlines the features of a selection of more commonly used projects. It is by no means a full list projections which are commonly used today. Also, it describes each projection in its simplest form (eg only one Standard Parallel not two). Contents Introduction Comparison of these projections: Azimuthal Projection – Stereographic The oldest known record of this projection is from Ptolemy in about 150 AD. Today, this is probably one of the most widely used Azimuthal projections. This is a conformal projection in that shapes are well preserved over the map, although extreme distortions do occur towards the edge of the map. One interesting feature of the Stereographic projection is that any straight line which runs through the centre point is a Great Circle. These are two examples of maps using Stereographic projection over polar areas. Produced Using G.PROJECTOR – software developed by NASA and the Goddard Institute for Spatial Studies. UTM Zones

Hide and seek Mercator Projection by Matt T. Rosenberg The Mercator projection was developed in 1569 by Gerardus Mercator as a navigation tool. Like the Peters map, the grid is rectangular and lines of latitude and longitude are all parallel. The Mercator map has always been a poor projection for a world map yet due to its rectangular grid and shape, geographically illiterate publishers found it useful for wall maps, atlas maps, and maps in books and newspapers published by non-geographers. As far back as 1902, a cartographer warned, "People's ideas of geography are not founded on actual facts but on Mercator's map." Mercator Projection Fortunately, over the past few decades, the Mercator projection has fallen into disuse from many reliable sources. Thus, the resolution clearly called for the complete elimination use of the Mercator as well as the Peters projection. Next page > Alternatives > Page 1, 2, 3 Articles by Date | Articles by Topic