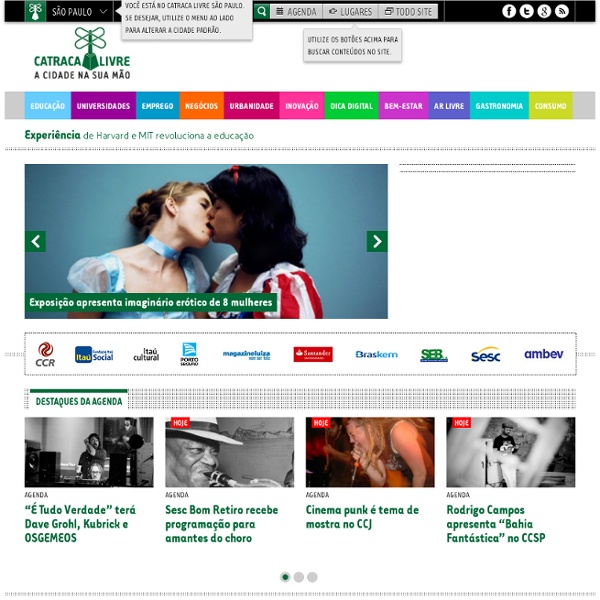 World of CEOs Jobs, Opportunities and Talent Getting the top job How to give yourself the best possible shot As a former CEO headhunter and CEO confidant, Steve Tappin, our founder, is accustomed to helping CEOs get the top job. Here are his top tips: FREEANONS globo.com - Absolutamente tudo sobre notícias, esportes e entretenimento 25 Top UK Startups The London startup scene is well-documented. But the UK innovation ecosystem is not confined to the city. All types of companies are emerging from surrounding places, in Cambridge, Edinburgh, Brighton, Manchester, Birmingham, small Welsh villages, an island in the English Channel. Here is a list of the top 25, although we could've easily named 125. Nominate some of your own picks in the comments below. 1.

Shake Shack: Branding a Better Burger Paula Scher's distinctive Shake Shack identity has helped launch the fast-casual hamburger chain as a $1.6 billion brand. As every Shackburger fan knows, Shake Shack serves some of the best burgers in the world. And now, with a recent IPO that has valued the company at a staggering $1.6 billion, more of the world will get to know the Shack: From its roots as a hot dog stand in New York’s Madison Square Park, the company has grown into a chain of 63 restaurants from Chicago to Dubai, and plans to use the additional funds to expand to over 400 locations in the next decade. Tastiness of its burgers aside, no small part of Shake Shack’s success is due to its sophisticated sense of design, expressed in an iconic brand identity and environmental graphics by Pentagram’s Paula Scher and original restaurant architecture by James Wines and his firm SITE.

Stay Connected to Your Future - Young African Leaders Initiative Network Spotlights and How-to Guides Every day, YALI Network members do extraordinary things. You can learn more about their achievements – and access practical information to help you achieve your own goals – on the YALI Network blog. There are more than 175 blog posts on the website with new ones published each week. Explore the various types of marketing strategies used by professionals Exlore the strategies you will become familiar with as a professional marketer... Very often the success or failure of a company is a direct result of an effective or not so effective marketing strategy. Therefore, choosing a marketing strategy that fits the company product is of vital importance. Deciding on your audience The first step toward developing an appropriate marketing strategy is to know your audience.

Japan's Startup Scene - The Asian Entrepreneur Japan is one of the most industrious societies in the world, but it has long been considered a land of contradictions. It changed from being a closed island nation nearly 100 years behind the times technology-wise by 1870 to one that defeated Russia, a major European power, just 35 years later in the Russo-Japanese war of 1905. Despite the intense periods of change, Japan is remarkably slow to change its ways of business and politics. The nation is known for its technology industries, but is often accused of lacking true innovation. Japan is highly dependent the outside world for resources and trade, but is still very much closed off and hard to penetrate. Among those contradictions is the “Japanese Startup Gap”: Japan, as all modern societies, has benefited greatly from the innovation and value creation of entrepreneurship, yet has a culture that is highly resistant, if not openly hostile, to startups.