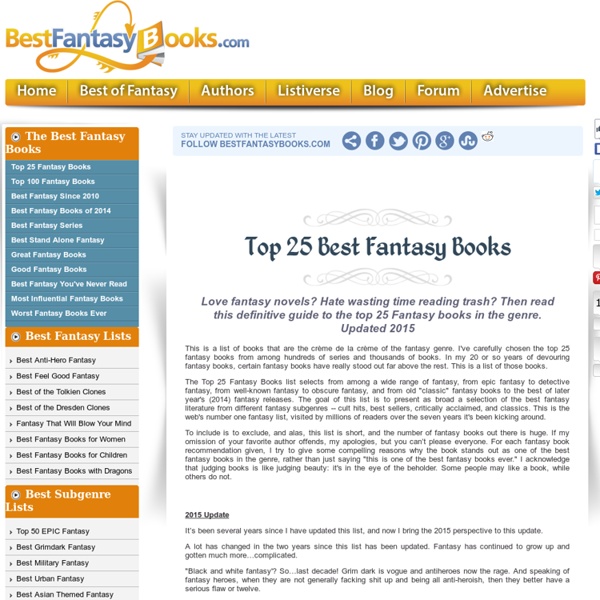 This one is full to the brim with gritty, amoral, cynical dark humor. A different sort of fantasy, but one that's extremely refreshing, disturbing, and entertaining -- one of the best fantasy reads to come out the past couple years. Even as we near 2015, The Prince of Thorns still stands tall among other strong fantasy books. For a dark, gritty, anti-hero driven fantasy, I felt strong Abercrombie vibes. There's a strong influence from A Game of Thrones -- and if you've ever read KJ Parker's The Engineer trilogy, you'll see some similarities in the tone and style of world. This is the brutal story of Prince Jorg, a teenage princeling who abandoned his father's castle after witnessing the murder of his mother and brother. The narration is first person and well done at that -- I haven't been so entertained by first person narration in ages. Well Lawrence does not fall into these trappings. I highly recommend this book, especially if you are looking for a darker sort of tale. Related:  Books

Share Book Recommendations With Your Friends, Join Book Clubs, Answer Trivia 25 of the greatest Sci-Fi books ever written Ten games that make you think about life At the start of this year, we decided to come up with a list of Flash casual games with a philosophical bent. To be honest, we struggled. After days of research, we could only find a handful of games that had the thought-provoking depth we were looking for. Our list (which you can view by clicking here) was therefore only five games long. Fast forward to now, and it is remarkable how much difference a few months can make. In a wonderful twist, it seems it is the Flash gaming space - until now known more for the throwaway nature of its games rather than depth - that is leading the way in this exciting new area of gaming, as we hope the following games prove. One you have finished playing these games, check out our follow-up lists: Ten More Games That Make You Think About Life and Another 20 Games That Make You Think About Life. 1Immortall The game starts with you crash landing on a planet. 2Loved 3I Can Hold My Breath Forever 4The Company of Myself 5Coma 6Loondon 7I Wish I Were the Moon

Best Fantasy Books | #1 Guide to the best fantasy books, games, movies, and more! Stars, Beetles, and Fools: Suggested Readings in Comics Growing up as I did amongst actors, singers, painters, potters, mimes, sword-swallowers, tightrope walkers, heavy metal musicians, master craftsmen, and all and sundry sorts of outcast and artist, I developed into a rather unusual child. 'Loud' is not a strong enough descriptor, 'frantic' too subtle a word, 'dramatic' a gross understatement. It drove my teachers mad--they yelled, they chastised--in first grade, my student report said that I would 'never amount to anything'. The only thing that didn't seem to get me in trouble was drawing, because when I was drawing, I was quiet. So I drew. When adults asked what I wanted to be when I grew up, I said I was going to 'draw comic books'.I loved comics as a child--well, I loved the pictures. Highly Suggested Alan Moore Alan Moore is the most prominent and well-respected writer in comics, and his was also some of the first work I read. Steve Gerber Pat Mills and 2000AD Carl Barks and Don Rosa EC Comics and Mad Magazine Winsor McCay Kazuo Koike

Five games that make you think about life Do you ever get that feeling, when playing games, that you really should be doing something more edifying with your life. I do, usually at about three in the morning after a marathon session of slaughtering undead in Sacred 2. It is a sad fact that most the computer games I play are about as intellectually stimulating as a fart. But, thankfully, not all. Here, I present five games I've found that force you to think a little - in some cases even get a bit philosophical. 1Passage It is very rare - nay, impossible - for a game to reduce me to tears. Passage can be played on Mac OSX, Windows and Linux and can be downloaded here. 2The Majesty of Colors "Last night I had a dream". The Majesty of Colors is a game that can be played multiple times - the decisions you make during the game determine between the many different endings. 3The Game The Game starts by telling us that there are no rules, just play. Trust me, The Game will change your perception of what games are about. 4Gray Super Karoshi

Top 25 Best Science Fiction Books Love Science Fiction? Hate wasting time reading the trash? Then read this definitive guide to the Top 25 Science Fiction Books in the genre. It's been a long time in coming, but the NEW Top 25 Best Science Fiction list has been released January 2016. There's a LOT more thought put into the list here than the old list (which is still a great list) and the picks are more representative of the genre as a whole. We've also filled out every section with MORE information about why we consider each entry the best of the best. This list presents my picks for the Top 25 Science Fiction Books. I know that just like my Best Fantasy Books list, you can’t please everyone. You can read my deeper look into the Science Fiction genre and my reasoning’s for my picks below, or you can just jump to the list. What’s Qualifies as “The Best?” This is a tricky one. Many of the best “classics” science fictions are heavy on ground breaking ideas but pretty light on story and characters.

Best Science Fiction Books | #1 Guide to the best science books, games, movies, and more! The web's #1 Guide to the best science fiction books. Comprehensive subgenre recommendation lists from the best Space Opera to the best Cyberpunk My Favorite African Science Fiction and Fantasy (AfroSFF) Short Fiction of 2015 | Wole Talabi I have always loved ‘Best-Of’ SF/F short story collections, lists, anthologies. ‘The Hugo Winners’ anthology originally edited by Isaac Asimov was where I first found most of my favorite authors. There is something about stories that move someone enough to want to collect them in a group and say to someone else, “Here, you should read this.” I’ve also enjoyed the fairly recent and ongoing popularization of African science fiction and fantasy and I’m looking forward to more and more of it being published, read and discussed. 2015 has been a good year for African Science Fiction and Fantasy (or AfroSFF, as seems to be the consensus abbreviation). [Full Disclosure: I’ve also written a few AfroSFF stories published this year, I have a story forthcoming in Imagine Africa 500 and was meant to have one in AfroSFv2 but it got pulled by the editor a few days before the official announcement.] 1. 2. I liked this story because of its style. 3. 4. 5. 6. 7. 8. 9. 10. So that’s it for now. Like this:

Another 20 games that make you think about life First we gave you five. Then we gave you ten. Now we are giving you 20 games that make you think about life. If you have developed a taste for games of a philosophical nature, then you should be in for a treat - we have some seriously innovative games here, everything from Elude, a game that explores the nature of depression, to Ulitsa Dimitrova, a tale about a street-urchin in Russia. As with our previous lists, we have focused mainly on free games that you can play in your browser. 1 Elude Developed by Singapore-MIT Gambit Game Lab, Elude is a dark, atmospheric game that aims to shed light on the nature of depression. The forest that you start the game in represents a normal mood. This is a gloomy underground cavern, with a sticky muddy base that sucks you down. 2 Air Pressure You will have to play through Air Pressure - a Flash port of an interactive novel by Bentosmile - more than once to truly understand the characters and themes in this game. 3 Symon 4 Ulitsa Dimitrova 5 Ute 6 Aether