7 Ways To Get Rid of Ants Naturally 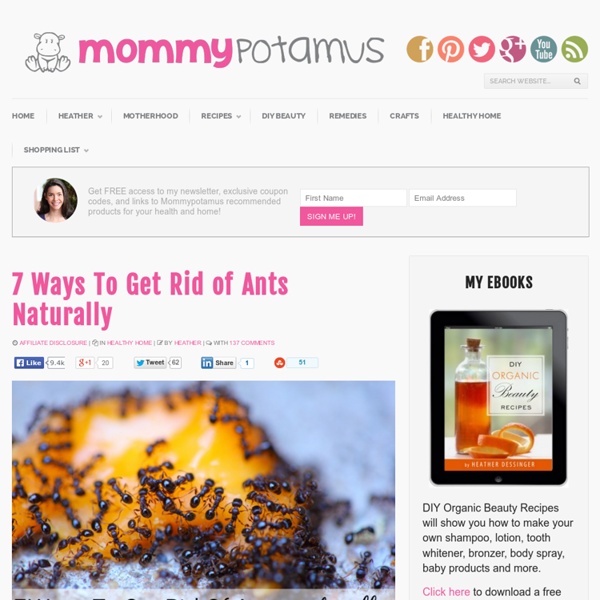 Fire Cider Cold and Flu Remedy, by Rosemary Gladstar 6 Jan Our friend, Martha, posted this video on Facebook and David shared it with me. It combines a lot of things I’ve learned from various people along the way, including what the herbalist I apprenticed with in Seattle called “the triumvirate of herbs: garlic, onion and ginger.” I also made a truly yummy antibiotic this summer when I had that cracked, infected tooth: apple cider vinegar, raw honey and many, many cloves of garlic. It turned out to be a terrible remedy for an infected tooth, due to the acid-sweet combo, but it certainly clears up any cold or other illness that wants to hitch a ride.

45 Cool Uses For Lemons Why do we Love lemons? It's a funny love affair. These amazing little sour fruits captivate us from the first taste and keep us coming back as witnessed by these babies trying lemons for the first time... Uses for Lemons you may not have thought of... Biodynamic Organic Farming - What is it? Share by Shauna Willetts – Eco 18 Organic, pesticide free, GMO free and parabens. These are some common terms heard, or seen on a day-to-day basis, but what about the term “biodynamic organic farming”? It sounds pretty scary, doesn’t it? Non-Toxic Bug Repellent Recipe with Coconut Oil NOTE: A few weeks back, my recipe for bug repellent was featured on the CoconutOil.com website. Since there are still some high days of summer left and the bugs are in full swing, I wanted to share my recipe for bug repellent on here too! by Jessica Espinoza CoconutOil.com Looking for an all-natural, non-toxic insect repellent that doesn’t contain the chemicals (like DEET) that most of the commercial brands do? There are many natural, non-toxic ingredients that can be used to make a bug repellent that won’t harm you and your family. Most homemade bug balms and bug sprays utilize the strength of essential oils.

HerbMentor News 92: How to Make Cayenne Salve Every two months we feature a different herb on HerbMentor.com so that we can really dive into learning particular plants on a deeper level. During this cold and dark time of the year we are learning more about one of the hottest and most popular spices in the world: cayenne. The health benefits of cayenne are truly astounding! From its heart-protective qualities to boosting the immune system, it will even stop bleeding from a cut or wound!

The Many Medical Uses of Silver Throughout History Dr. Tom O’Brien, Guest WriterWaking Times Medicinal use of silver predates recorded history, and can only be guessed. It is fairly certain, however, that the use of silver vessels for storing and carrying water made use of one of its important properties… which was that of destroying the water-borne bacteria and pathogens, thus allowing the water to remain purer for extended periods of time.

Top 10 Herbs For Memory Share Many people associate memory loss with aging. But whether it’s occasional forgetfulness or loss of short-term memory, one must be aware that there are specific factors that can cause it even at a young age instead of simply attributing memory loss to a natural decline in cognitive functioning. 10 Steps to Starting a Community Garden In Vancouver, developers discovered that turning their vacant lots into community gardens while they waited for their next project to be ready could save them hundreds of thousands of dollars in city taxes. Putting a garden on a commercially zoned site allows it to be reclassified as public park or garden, resulting in an 80% tax saving — even if it is known that the garden is temporary. In one downtown property where a hotel parking lot was converted to an urban farm, the property owner is saving $132,000 a year in taxes. Given the realities of real estate land values in cities, this policy at least rewards developers for setting up gardens and managing some of them — however temporarily. For the community gardeners involved, even getting a temporary plot is obviously worth it.

Whipped Dandelion & Coconut Oil Moisturizer This recipe is super easy to make and requires just two ingredients: coconut oil and dandelion flowers. Coconut oil, reputed to have many health benefits when used both internally and externally, is readily available in most areas. I live in small town USA and found two types to choose from in my local grocery store. I buy it in larger quantities for soap making and other projects, through Mountain Rose Herbs. Dandelion flowers have been traditionally used to heal rough, chapped skin and soothe sore, achy muscles. In this recipe, it also lends a natural, buttery-yellow tint to the finished product.