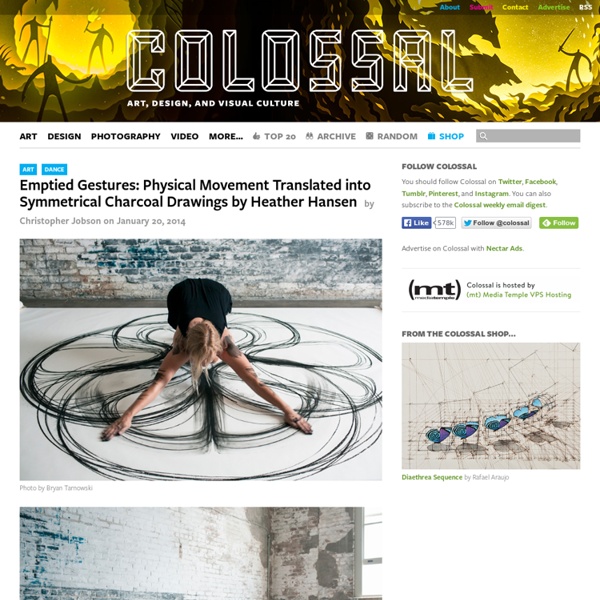 Photo by Bryan Tarnowski Photo by Spencer Hansen at Ochi Gallery Splayed across a giant paper canvas with pieces of charcoal firmly grasped in each hand, Heather Hansen begins a grueling physical routine atop a sizeable paper canvas. Her body contorts into carefully choreographed gestures as her writing implements grate across the floor, the long trails resulting in a permanent recording of her physical movements. Part dance and part performance art, the kinetic drawings are a way for Hansen to merge her love for visual art and dance into a unified artform. Hansen most recently had a group exhibition, The Value of a Line, at Ochi Gallery in Ketchum, Idaho which runs through March 31, 2014. Related:  Movement Analysis

Gestures and Tools for Kinect - Eternal Coding - HTML5 / Windows / Kinect / 3D development You have certainly not missed (as a regular reader of this blog ) that the Kinect for Windows SDK is out! For now, however, no gestures recognition services are available. So throughout this paper we will create our own library that will automatically detect simple movements such as swipe but also movements more complex such as drawing a circle with your hand. The detection of such gestures enable Powerpoint control the Jedi way ! If you are not familiar with the Kinect for Windows SDK, you should read a previous post that addressed the topic: There is an infinite number of solutions for detecting a gesture. Algorithmic search Template based search Note that these two techniques have many variants and refinements. You can find the code used in this article just here: GestureDetector class In the end, all the work is done in the Add method: Recording Replay

Seamless Backdrop Paper | Backdrop Express Seamless backdrop paper is one of the most common types of backdrops used today. It's inexpensive price tag and consumable nature makes it perfect for a variety of uses, including: portraits, commercial photography, product photography, video photography and more. Seamless paper backdrops can also be used for non-photography related needs as well, such as: decoration, theater productions, banners, and posters. About Seamless Background Paper Seamless paper it is one of the most cost-effective and versatile types of photography backdrops. At Backdrop Express we offer a large selection of Savage Widetone® Seamless Background Paper available in 68 colors and 4 standard sizes: 26" x 12 yards, 53" x 12 yards, 107" x 12 yards, 107" x 50 yards. Seamless paper provides a large, smooth, non-reflecting background surface. Want to learn more about seamless paper? BUNDLE & SAVE: Save up to $30 on Seamless with our NEW Seamless Paper Backdrop Kits!

Cinematics case study: Mass Effect 3 Earlier this year, Budapest studio Digic Pictures produced a stunning three minute trailer for the Bioware game Mass Effect 3. The trailer, dubbed 'Take Earth Back', tells the story of an alien invasion as Earth is attacked by the game's Reapers. We go in-depth with Digic to show how the cinematic was made - in stereo - featuring behind the scenes video breakdowns, images and commentary from several of the artists involved. Above: watch 'Take the Earth Back' Motion capture Artists: Csaba Kovari (Mocap TD), Istvan Gindele (Mocap TD), Gyorgy Toth (animator) We used Vicon’s T160 camera system to record all motion for this piece. In general we capture 2-3 or sometimes even 4 actors’ movements at once together with their props (swords, shields etc). Usually the mocap shooting days are preceded by rehearsal days, for example if we have a two day mocap shooting session then the actors need at least two-three days rehearsal with the director. Character animation Earth shot Blood effects 1.

Living Room Layout Dilemma I have been trying to figure out how to lay out our new living room for weeks, so maybe you wonderful readers can help me out. The issue is the shape of the room and the difficulty of having dueling focal points. The room has a working fireplace flanked by lovely built-in bookcases and storage. The fireplace would make a splendid focal point on its own, if we were to leave the room as a formal living room. The living room is long and narrow with a large bank of windows that provide the room’s only natural light. All floor plans created using Icovia’s Room Planner. So, how do I make this long space cozy AND accommodate two focal points? Discuss. One big space, couch in front of window One big space, chairs in front of window Same as B, but with an area rug Two separate seating areas, couch partially blocking window Same as D, but with an area rug Two separate seating areas, possible traffic issue Same as F, but with an area rug So, what do you think?

IIC_kinesthetic_cognition IIC. Kinesthetic Spatial Cognition “Kinesthetic spatial cognition” can be defined as referring to the perception, memory, and recall of spatial information via the kinesthetic perceptual-motor system. IIC.10 Spatial Cognition versus Verbal Cognition A great deal of research has demonstrated that spatial cognitive processes and verbal cognitive processes use separate cognitive resources. Other evidence for multi-channel models comes from studies of patients with neurological disease or injury. The right-brain spatial, left-brain verbal specialisation is not a fixed relationship but appears to be based on more fundamental differences in processing styles of the two cerebral hemispheres such as sequential processes of the left hemisphere versus holistic processes of the right hemisphere (Bradshaw and Nettleton, 1981; Luria, 1970; Trevarthen, 1978). However, in some cases when verbal labels are attached to stimuli the memory for those stimuli does not necessarily improve.

Magic Colored Milk Science Project If you add food coloring to milk, not a whole lot happens, but it only takes one simple ingredient to turn the milk into a swirling color wheel. Here is what you do. Magic Milk Materials 2% or whole milk food coloring dishwashing liquid cotton swab plate Magic Milk InstructionsPour enough milk onto a plate to cover the bottom.Drop food coloring onto the milk. I made a video so you can see what to expect.Dip a cotton swab in dishwashing detergent liquid.Touch the coated swab to the milk in the center of the plate.Don't stir the milk; it isn't necessary. Milk consists of a lot of different types of molecules, including fat, protein, sugars, vitamins, and minerals. When you introduce detergent to the milk, several things happen at once.

Photography. Else Ernestine Neulander-Simon (A.k.a. YVA) Else Ernestine Neulander-Simon (Aka YVA) was a german photographer. Yva came from a Jewish middle-class family. She worked for many of the illustrated magazines and periodicals of the time. Towards the end of the 1920s, Yva began focusing on the commercial aspect of photography, specializing in advertising and photography. Yva’s innovative, and experimental work with multiple exposures became a hallmark of her work. Yva died at Sobibor extermination camp in 1944. More images>>>

The Reconnection - Reconnective Healing - Reconnective Yoga - Reconnective Animals -Reconnective Kids The Geek Movement » UIST 2009 SIC: Laban Gestures for Expressive Keyboarding On October 5th, we participated in the Student Innovation Contest at the 2009 User Interface Software and Technology conference (UIST) in Victoria, BC. Student teams were given about a month to develop a novel use for a pressure sensitive keyboard developed by Microsoft Research, and all the entries were demonstrated and voted upon at the conference. Our submission is detailed below and in this demo video. Laban Gestures for Expressive Keyboarding Karen Tanenbaum, Josh Tanenbaum & Johnny Rodgers Simon Fraser University-School of Interactive Arts + Technology Keyboards tend to be discrete input devices, capable of multiple isolated interactions. Theatre and dance use movement frameworks to understand gesture. To situate our gestures in a mood space, we adopted Russell’s classic “circumplex” model of affect. By combining these two models, we have arrived at a framework for expressive gestures. We believe that this framework has applications wherever computation and emotion intersect.