COWSPIRACY: The Sustainability Secret. Director’s Note: The science and research done on the true impacts of animal agriculture is always growing. 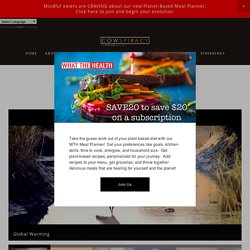 Water footprint accounting and scarcity indicators of conventional and organic dairy production systems. U.S. could feed 800 million people with grain that livestock eat, Cornell ecologist advises animal scientists. MONTREAL -- From one ecologist's perspective, the American system of farming grain-fed livestock consumes resources far out of proportion to the yield, accelerates soil erosion, affects world food supply and will be changing in the future. 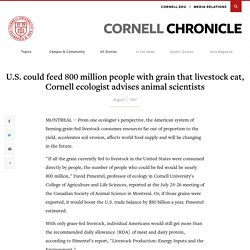 "If all the grain currently fed to livestock in the United States were consumed directly by people, the number of people who could be fed would be nearly 800 million," David Pimentel, professor of ecology in Cornell University's College of Agriculture and Life Sciences, reported at the July 24-26 meeting of the Canadian Society of Animal Science in Montreal. Or, if those grains were exported, it would boost the U.S. trade balance by $80 billion a year, Pimentel estimated. With only grass-fed livestock, individual Americans would still get more than the recommended daily allowance (RDA) of meat and dairy protein, according to Pimentel's report, "Livestock Production: Energy Inputs and the Environment.

" By David Pimentel. How Planting Crops Used to Feed Livestock is Contributing to Habitat Destruction - One Green Planet. Animal Feed. As farming has industrialized, the interdependent agricultural cycle of plants and animals has been disconnected. 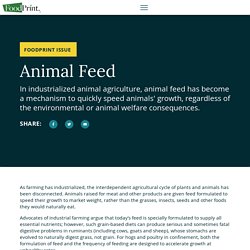 Animals raised for meat and other products are given feed formulated to speed their growth to market weight, rather than the grasses, insects, seeds and other foods they would naturally eat. Advocates of industrial farming argue that today’s feed is specially formulated to supply all essential nutrients; however, such grain-based diets can produce serious and sometimes fatal digestive problems in ruminants (including cows, goats and sheep), whose stomachs are evolved to naturally digest grass, not grain. For hogs and poultry in confinement, both the formulation of feed and the frequency of feeding are designed to accelerate growth at unhealthy rates. The Political Economy of Feed Current industrial farming practices rely heavily on grain, particularly corn and soybeans. 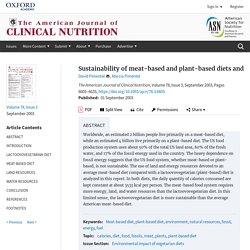 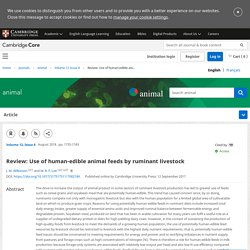 Royalsocietypublishing. 10. The environment in 2050: flooded cities, forced migration – and the Amazon turning to savannah. ‘Good morning. 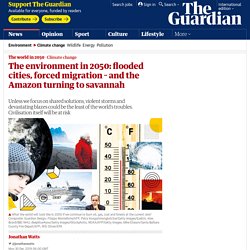 Here is the shipping forecast for midday, 21 June, 2050. Seas will be rough, with violent storms and visibility ranging from poor to very poor for the next 24 hours. The outlook for tomorrow is less fair.” All being well, this could be a weather bulletin released by the Met Office and broadcast by the BBC in the middle of this century. Destructive gales may not sound like good news, but they will be among the least of the world’s problems in the coming era of peak climate turbulence. I write this imaginary forecast with an apology to Tim Radford, the former Guardian science editor, who used the same device in 2004 to open a remarkably prescient prediction on the likely impacts of global warming on the world in 2020.

Journalists generally hate to go on record about the future. Radford allowed himself no such safe distance or equivocation in 2004, which we should remember as a horribly happy year for climate deniers. Radford’s most precise predictions relate to the science. Tandfonline. Ehp.niehs.nih. Join the worldwide screening of The Need to GROW. At Food Revolution Network (FRN), our mission is healthy, ethical, sustainable food for all. 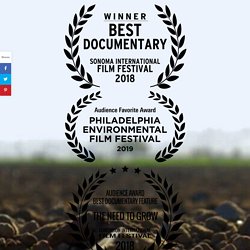 Information and resources shared by FRN are for informational purposes only and are not intended to diagnose, treat, or cure any type of disease or condition. Reviews and testimonials of specific diets and approaches to health represent individual experiences and FRN does not guarantee any specific results from these approaches for your specific situation. In support of our educational mission, we sometimes share resources offered by trusted partners.

If you purchase products from one of these partners, FRN may at times receive a portion of the proceeds. These affiliations support our work and allow us to continue bringing you valuable, life-changing content.