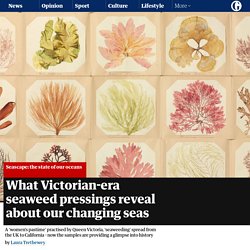 The locker was obscured by a dead ficus plant and looked as if no one had opened it for years. But the label on it intrigued him: Herbarium. He opened it and inside found hundreds of stacked manila envelopes. Each one contained a single piece of seaweed, pressed and preserved on white paper. The collection demonstrated a curator’s attention to detail, with neat labels in tidy handwriting that documented every seaweed’s origin and collector.

Centuries-old algae pressings from California are being studied in Monterey Bay Aquarium While all the hi-tech underwater drones and sensors monitoring the ocean today can document the present, and hint at the future, they have a big blind spot when it comes to telling the past. A 19th century cartoon by John Leech depicting British enthusiasm for natural history. Awesome talk by @Missing_Rectrix on effect of environmental change on pollen received on plant stigmas over the past 100 years...using @CarnegieMNH #herbarium specimens! And only her first rotation in #ashmanlab, stay tuned as her dissertation research pr. Phycological Herbaria as a Useful Tool to Monitor Long-Term Changes of Macroalgae Diversity: Some Case Studies from the Mediterranean Sea.

Herbaria macroalgae as a proxy for historical upwelling trends in Central California. 1. 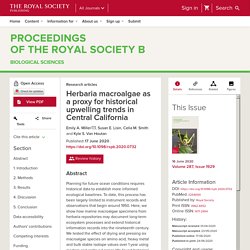 Phenology. Weeds. Environmental Change. Using herbaria to study global environmental change - Lang - 2019. Introduction Global environmental change is one of the major challenges of the 20th and 21st centuries. It has been evident since the age of industrialization in the late 18th century – sometimes also referred to as the advent of the anthropocene – and has continuously gained momentum (Fig. 1a; Steffen et al., 2011; Hamilton, 2016). Biologists study global change for its broad ecological impact, and its negative effects on biodiversity.

Also, as it represents an unplanned, long‐term and large‐scale experiment, studying global change can promote understanding of fundamental processes such as rapid adaptation. Experimental approaches to study these topics are usually locally focused, and limited to a duration of a few decades (Leuzinger et al., 2011). In this context, natural history collections are an underused treasure of temporally and geographically broad samples that we have just begun to dust off (Holmes et al., 2016). Box 1. Box 2. Using iNaturalist with specimens: Heberling. 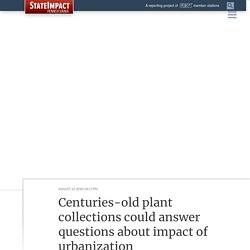 She has worked as a reporter for WHYY since 2004. Susan's coverage of the 2008 Presidential election resulted in a story on the front page of the New York Times. In 2010 she traveled to Haiti to cover the earthquake. That same year she produced an award-winning series on Pennsylvania's natural gas rush called "The Shale Game. " Emma Lee/WHYY Dr. For centuries, explorers, scientists, and amateur botanists scoured the country to document and preserve plant species. Over time, the collections became obscure and fell out of use, aside from the occasional researcher who had to schedule appointments and often travel long distances to view the records. Conservation Biology. Herbarium Collections as Tools for Conservation Biology. Contrasting spatial, temporal and environmental patterns in observation and specimen based species occurrence data. Abstract Species occurrence data records the location and time of an encounter with a species, and is valuable for many aspects of ecological and evolutionary analyses. 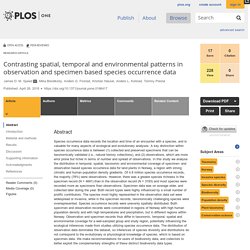 Century-old botany records may hold key to monarch butterfly survival. Naturalists' records dating back more than 100 years may be instrumental in determining the fate of the monarch butterfly in the 21st century. 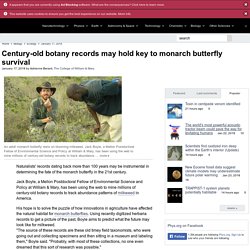 Jack Boyle, a Mellon Postdoctoral Fellow of Environmental Science and Policy at William & Mary, has been using the web to mine millions of century-old botany records to track abundance patterns of milkweed in America. His hope is to solve the puzzle of how innovations in agriculture have affected the natural habitat for monarch butterflies. Using recently digitized herbaria records to get a picture of the past, Boyle aims to predict what the future may look like for milkweed.

Particulate Matter Deposited on Platanus acerifolia Leaves. Fungal Collections: infer biogeographic, environmental, host structure in communities of endophytic fungi. The strengths and weaknesses of species distribution models in biome delimitation - Moonlight - - Global Ecology and Biogeography. Macroecology is the study of large‐scale patterns of biological diversity across space and time and the underlying community assembly processes that determine these patterns. 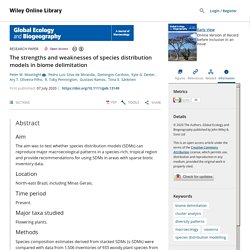 The description of macroecological patterns is of paramount importance in addressing the global, societal need for planet‐wide ecosystem models, which have the potential to transform our understanding of the biosphere (Purves et al., 2013; Socolar, Gilroy, Kunin, & Edwards, 2016). As a science, macroecology relies upon accurate and comprehensive data of species distributions through time and space. Distribution data for mammals, birds and amphibians are becoming increasingly available (Castro‐Insua, Gomez‐Rodrıguez, & Baselga, 2016; McKnight et al., 2007; Melo, Rangel, & Diniz‐Filho, 2009), but distribution data for most lineages in the tree of life are still poor (Scheffers, Joppa, Pimm, & Laurance, 2012).

This is known as the Wallacean shortfall. Can s‐SDMs be used to delimit biomes? 2.1 Study area. Using Herbarium Specimens to Understand Patterns of Plant Diversity. The oldest specimens in the herbarium of the Royal Botanic Garden Edinburgh was collected in 1697, a little over 320 years ago. 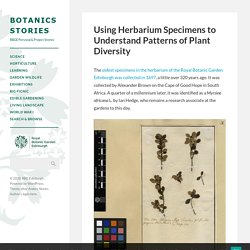 It was collected by Alexander Brown on the Cape of Good Hope in South Africa. A quarter of a millennium later, it was identified as a Myrsine africana L. by Ian Hedge, who remains a research associate at the gardens to this day. Vouchers in ecology.