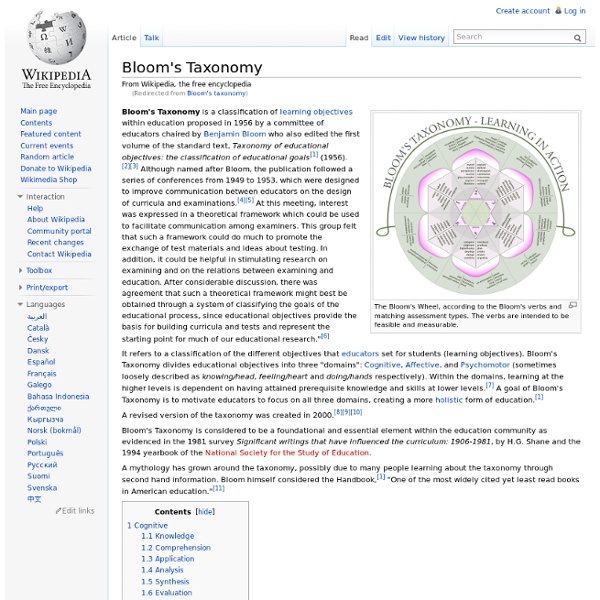 Bloom's wheel, according to the Bloom's verbs and matching assessment types. The verbs are intended to be feasible and measurable. Bloom's taxonomy is a classification of learning objectives within education. It is named for Benjamin Bloom, who chaired the committee of educators that devised the taxonomy, and who also edited the first volume of the standard text, Taxonomy of Educational Objectives: The Classification of Educational Goals. Bloom's taxonomy refers to a classification of the different objectives that educators set for students (learning objectives). It divides educational objectives into three "domains": cognitive, affective, and psychomotor (sometimes loosely described as "knowing/head", "feeling/heart" and "doing/hands" respectively). Bloom's taxonomy is considered to be a foundational and essential element within the education community. History[edit] The first volume of the taxonomy, "Handbook I: Cognitive" (Bloom et al. 1956) was published in 1956. Cognitive[edit]

Six Thinking Hats Six Thinking Hats is a book by Edward de Bono which describes a tool for group discussion and individual thinking involving six colored hats. "Six Thinking Hats" and the associated idea parallel thinking provide a means for groups to plan thinking processes in a detailed and cohesive way, and in doing so to think together more effectively.[2] Underlying principles[edit] The premise of the method is that the human brain thinks in a number of distinct ways which can be deliberately challenged, and hence planned for use in a structured way allowing one to develop tactics for thinking about particular issues. de Bono identifies six distinct directions in which the brain can be challenged. In each of these directions the brain will identify and bring into conscious thought certain aspects of issues being considered (e.g. gut instinct, pessimistic judgement, neutral facts).

Datasets 1. Background Wikipedia has grown into one of the central knowledge sources of mankind and is maintained by thousands of contributors. Weekend DIY Dad Activity: How to Make a Quick-n-Easy Water Rocket Email subscribers, to watch video click here. Editor’s note: This is a guest post from David Erik Nelson, author of Snip, Burn, Solder, Shred: Seriously Geeky Stuff to Make with Your Kids. Although store-bought water rockets were once an almost universal part of childhood (at least in suburban middle America, where I grew up), DIY water rockets are almost unheard of in the United States, despite being common in the United Kingdom. The key to the DIY water rocket is the ubiquitous plastic soda bottle. (Often called PET bottles in the UK, these are basically made of polyester, just like your favorite pantsuit.) A soda bottle can easily withstand 150 pounds of pressure per square inch—significantly more than a car or bike tire, and more than enough to launch it into flight.

Tips for Writing Instructional Objectives - Bloom's Taxonomy Job Aids I am so delighted to see this post that includes Bloom's Taxonomy Wheels by ZaidLearn. I always find that it's far easier to design materials using these wheels than it is to see the verbs/products in lists. Many instructional designers can benefit from these job aids when trying to find the right action verbs for their objectives. Here are some wheels for the cognitive domain. Bloomin' Apps This page gathers all of the Bloomin' Apps projects in one place.Each image has clickable hotspots and includes suggestions for iPad, Android, Google and online tools and applications to support each of the levels of Bloom's Revised Taxonomy.I have created a page to allow you to share your favorite online tool, iOS, or Android app with others. Cogs of the Cognitive Processes I began to think about the triangular shape of Bloom's Taxonomy and realized I thought of it a bit differently.Since the cognitive processes are meant to be used when necessary, and any learner goes in and out of the each level as they acquire new content and turn it into knowledge, I created a different type of image that showcased my thoughts about Bloom's more meaningfully.Here is my visual which showcases the interlocking nature of the cognitive processes or, simply, the "Cogs of the Cognitive Processes". IPAD APPS TO SUPPORT BLOOM'S REVISED TAXONOMYassembled by Kathy Schrock​ Bloom's and SAMR: My thoughts

Evaporating Cloud Overview[edit] The most commonly used of the TOC tools,[note 1] the EC was designed to address conﬂict or dilemma situations (trade-off situations where there is no acceptable compromise) by diagramming the logic behind the conflict and methodically examining the assumptions behind the logic. [3] The EC has a set format with five boxes, labelled A, B, C, D, D’, that are usually laid out as follows:[4] The generic structure of an Evaporating Cloud diagram. [B] ← [D ] [A] / ↑ / \ [A] conflict OR [B] [C] \ ↓ ↑ ↑ [C] ← [D’] [D] ↔ [D’] The boxes represent two opposing wants that represent the conflict (D, D’)[note 2], the needs that each want is trying to satisfy (B, C), and a common objective or goal (A) that both needs are trying to fulfil.

bloom’s taxonomy « The Taxonomy Blog During the 2001 recession, I decided to teach again. After 15 years as a taxonomist and business systems analyst, I returned to an earlier career. I love teaching and learning about social studies and public policy. But my skills as a taxonomist infused my teaching. I became a fan of Bloom’s taxonomy. Listing facts is step 1 on Bloom’s taxonomy, sorting is step 2, Categorizing is step 4, Analysis is step 5, Empathy is step 6 and Synthesis is step 7. How to Make a Slingshot Imagine the idealized rough and tumble boy depicted in literature, movies, and TV shows. Go ahead. Do it.