First Battle of Panipat from Baburnama. The handsome Ibrahim Lodhi multiplied his rigors at Delhi. 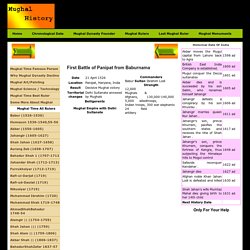 Mian Bhua the vazir of his father was first thrown in prison then given a cup of poisoned wine. Noblemen like Azam Humanyun (Not Babur's son) and Hussayn Khan Farmuli were assassinated. Daulat Khan Lodhi governor of Lahore was ordered to appear at Delhi,he excused himself and sent his son in his place. Ibn Battuta Yelp Reviews - Google Slides. On Translating ‘A’ishah al-Ba’uniyyah, Perhaps Arabic’s Most Prolific Premodern Woman Writer – ArabLit & ArabLit Quarterly. Th. 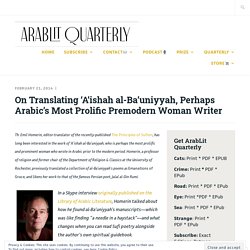 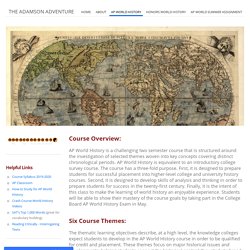 AP World History is equivalent to an introductory college survey course. The course has a three-fold purpose. First, it is designed to prepare students for successful placement into higher-level college and university history courses. Second, it is designed to develop skills of analysis and thinking in order to prepare students for success in the twenty-first century.

Finally, it is the intent of this class to make the learning of world history an enjoyable experience. Untitled. From its inception, the Jesuit order established an international presence, reaching India as early as 1542 when St. 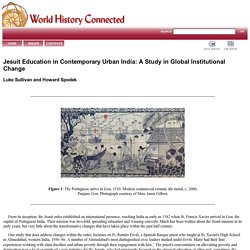 Francis Xavier arrived in Goa, the capital of Portuguese India. Their mission was two-fold, spreading education and winning converts. Much has been written about the Jesuit mission in its early years, but very little about the transformative changes that have taken place within the past half century. One study that does address changes within the order, focusses on Fr. Ramiro Erviti, a Spanish Basque priest who taught at St. In 1991, five years after Erviti's death, a new challenge to Jesuit education arose, this time originating outside the Church. 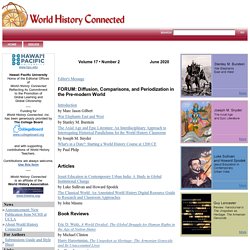 Untitled. BOB GARFIELD: From WNYC in New York, this is On the Media. 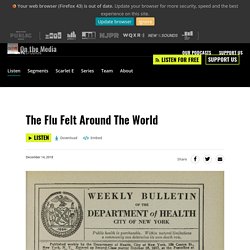 I'm Bob Garfield. AMANDA ARONCZYK: And I'm Amanda Aronczyk. BOB GARFIELD: Who reports on health for WNYC, sitting in for Brooke this week to focus on infection. FEMALE CORRESPONDENT: The level of alarm is extremely high. FEMALE CORRESPONDENT: New concerns this morning, after the first measles death in this country in more than a decade. Edpuzzle. 2019-2020 AP World History Quizizz Codes. WWI Webquest - Rumble of War. Untitled. Untitled. 「What has happened to me」~A testimony of a Uyghur woman~｜清水ともみ｜note. Matteo Ricci: Christianity and Western Ideas Introduced. Njinga Mbandi: Queen of Ndongo and Matamba. Southeast Asia in World History « Learning, Online. Centering I show students the annotated map below at least once in all of my World History classes, usually accompanied with facts about India—greater population than the Western Hemisphere! 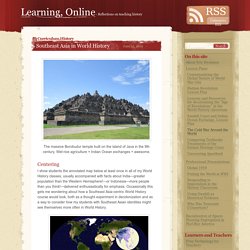 —or Indonesia—more people than you think! —delivered enthusiastically for emphasis. Occasionally this gets me wondering about how a Southeast Asia-centric World History course would look, both as a thought experiment in decolonization and as a way to consider how my students with Southeast Asian identities might see themselves more often in World History. What might stand out in such a course? Anthony Hazard: The Atlantic slave trade: What too few textbooks told you. Raider Nation: AP WORLD HISTORY - Daily Assignments. Unit 4: Transoceanic Interconnections (1450-1750) - THE ADAMSON ADVENTURE. When the End of Growth is not the Beginning of Decline. If the myth of isolation is one of the main consequences of Eurocentrism for how we think about the history of East Asia, Eurocentric approaches to the history of the Ottoman Empire have encouraged us to begin to see its actual end in 1922 long before it occurred. 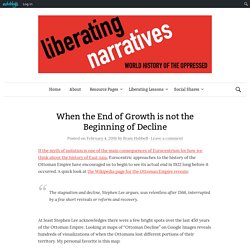 A quick look at the Wikipedia page for the Ottoman Empire reveals: The stagnation and decline, Stephen Lee argues, was relentless after 1566, interrupted by a few short revivals or reform and recovery. At least Stephen Lee acknowledges there were a few bright spots over the last 450 years of the Ottoman Empire. Looking at maps of “Ottoman Decline” on Google Images reveals hundreds of visualizations of when the Ottomans lost different portions of their territory. My personal favorite is this map: A Dutch Golden Age? That’s Only Half the Story. AMSTERDAM — Elisabeth Samson, an 18th-century freeborn black woman, made millions as a coffee planter and exporter using slave labor in the Dutch colony of Suriname. 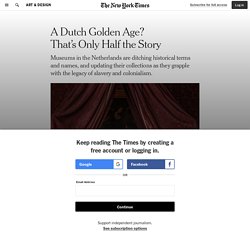 She was one of the wealthiest women of the era, but few people have ever heard her story. Lübeck - Queen of the Hanseatic League. Mike's Shared Files. BBC Radio 4 - You're Dead To Me - Available now. Hanseatic League. The Benefits And Negatives Of The Neolithic Revolution. The Neolithic Revolution was a groundbreaking event that happened at around 10000 B.C., when the earliest humans learned how to plant seeds and learned rudimentary horticulture, as well as how to domesticate animals.

It was a huge stepping stone for the early humans, for it started the transition from a hunting-gathering society to an urban, agricultural society and shaped the course for the rest of human history. While it is a widely accepted fact that the Neolithic Revolution was a monumental step, and a great thing that happened in history, an opinion has started to grow among historians that the Neolithic Revolution might have actually been a mistake. Here are some reasons why some think it was beneficial, and why some think it was a mistake. How Neolithic farming sowed the seeds of modern inequality 10,000 years ago. Most people regard hierarchy in human societies as inevitable, a natural part of who we are. Yet this belief contradicts much of the 200,000-year history of Homo sapiens. In fact, our ancestors have for the most part been “fiercely egalitarian”, intolerant of any form of inequality.

While hunter-gatherers accepted that people had different skills, abilities and attributes, they aggressively rejected efforts to institutionalise them into any form of hierarchy. Period 5 Question Trail. Period 5 Question Trail. Ap-world-history-modern-sampler. WHAP Pacing Calendar 2019. Viewpoint: How the British reshaped India's caste system. Image copyright AFP A Google search for basic information on India's caste system lists many sites that, with varying degrees of emphasis, outline three popular tropes on the phenomenon. First, the caste system is a four-fold categorical hierarchy of the Hindu religion - with Brahmins (priests/teachers) on top, followed, in order, by Kshatriyas (rulers/warriors), Vaishyas (farmers/traders/merchants), and Shudras (labourers). In addition, there is a fifth group of "Outcastes" (people who do unclean work and are outside the four-fold system).

Second, this system is ordained by Hinduism's sacred texts (notably the supposed source of Hindu law, the Manusmriti), it is thousands of years old, and it governed all key aspects of life, including marriage, occupation and location. Southeast Asia in World History « Learning, Online. Ebeckman. Posters. 1.4 Non-Reddit APWH Files. Đăng nhập một lần.

Scales. Teaching and Assessing Modules. Practice Questions, Videos, and Resources for Improving Student Work These free online learning modules feature: New sample free-response questions teachers can use with students Interactive scoring practice featuring responses from real students Videos of master teachers modeling key instructional strategies for challenging skills and content Resources to help teachers implement those strategies in their classrooms, and give students practice with the skills tested on the AP Exam Access to Teaching and Assessing Modules. India’s struggling farmers find seeds of hope in heritage crops. The Astounding Miniature Paintings of India’s Mughal Empire. Navina Najat Haidar, a curator in the Metropolitan Museum of Art’s department of , told Artsy that the “Mughal aesthetic is very unified, extending from architecture to painting—so painting and gardens are related.

Plus, the Mughal love of nature and observation of plants is closely linked to the representation of flora and gardens in painting.” Many Mughal gardens are preserved as UNESCO World Heritage sites; UNESCO describes Lahore’s Shalimar Gardens as the “apogee of Mughal artistic expression.” These gardens figure prominently in the miniature paintings, and both speak to the empire’s search for refinement and aesthetic pleasure. African Resistance to Colonial Rule. While African resistance to European colonialism is often thought of in terms of a white and black/European and African power struggle, this presumption underestimates the complex and strategic thinking that Africans commonly employed to address the challenges of European colonial rule. It also neglects the colonial-era power dynamic of which African societies and institutions were essential components. After the Berlin Conference of 1884–85, at which the most powerful European countries agreed upon rules for laying claim to particular African territories, the British, French, Germans, Italians, Spanish, Belgians, and Portuguese set about formally implementing strategies for the long-term occupation and control of Africa.

Women's War of 1929. Participate. The Demonization of Empress Wu. Did the Greeks Help Sculpt China's Terra Cotta Warriors? Women in Ancient Japan: From Matriarchal Antiquity to Acquiescent Confinement. How the 1918 Flu Pandemic Helped Advance Women’s Rights. The demise of the nation state. What is happening to national politics? 75 years since the Bengal famine: How much was Churchill’s bias to blame for the death of millions? Period One and Two Review WHAP by Jocelyn Harty on Prezi. 'Comfort Woman' Memorial Statues, A Thorn In Japan's Side, Now Sit On Korean Buses : Parallels. A "comfort woman" statue is placed on a bus seat to mark the 5th International Memorial Day for Comfort Women in Seoul in August. How nutmeg made its way from 15th-century infamy to the Thanksgiving table. How Stalin Became Stalinist. Is there any point to another Stalin biography?

Play this quiz now! Timeline of Chinese History and Dynasties. How red Russia broke new ground in the portrayal of black Americans. When Langston Hughes traveled to Moscow in 1932 to film “Black and White” — a Soviet propaganda film about the horrors of American racism — he figured he had little to lose. Hughes and the remaining cast, a group of 21 young African Americans, believed the nascent Soviet film industry, which had launched the careers of innovative and socially conscious directors like Sergei Eisenstein, Vsevolod Pudovkin and Dziga Vertov, couldn’t help but do a better job of portraying black people than Hollywood. The latter, depicted black people as violent, dim-witted, and sexually rapacious.