World History for Us All 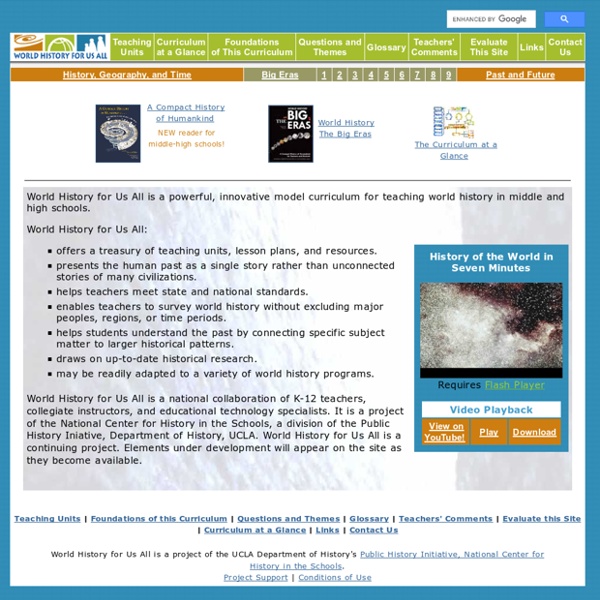 100 Incredible Lectures from the World’s Top Scientists Posted on Thursday June 18, 2009 by Staff Writers By Sarah Russel Unless you’re enrolled at one of the best online colleges or are an elite member of the science and engineering inner circle, you’re probably left out of most of the exciting research explored by the world’s greatest scientists. But thanks to the Internet and the generosity of many universities and online colleges, you’ve now got access to the cutting edge theories and projects that are changing the world in this list below. If you’re looking for even more amazing lectures, check out our updated list for 2012 with more talks from great minds.

Project Overview - FeederWatch Who are the people behind FeederWatch? Participants across North America are at the core of Project FeederWatch. But besides the army of citizen scientists collecting information on birds at their feeders, several people in the United States and Canada are responsible for archiving and analyzing the data and the day-to-day operation of the project. Project FeederWatch is administered in the United States by the Cornell Lab of Ornithology (CLO) and in Canada by Bird Studies Canada (BSC). Teaching World History & Geography - Conceptual Frameworks What to teach: conceptual frameworks This is the second component of a world history and geography body of knowledge to be taught in school: ....... chronological narrative ....... conceptual frameworks ....... thinking strategies What are conceptual frameworks?

Internet History Sourcebooks Internet Modern History Sourcebook The Internet Modern History Sourcebook now contains thousands of sources and the previous index pages were so large that they were crashing many browsers. See Introduction for an explanation of the Sourcebook's goals. Explanation of Sources of Material Here. See the Help! Internet History Sourcebooks Project East Asian History Sourcebook There is no way of avoiding the fact that China is the central culture of Eastern Asia. Massively larger than any of her neighbors, China may have developed its cultural forms in relative isolation, but since the advent of Buddhism has both absorbed outside influences and disseminated its own culture. Japanese, Korean and Vietnamese cultures are not comprehensible without taking into account power of Chinese culture in art, literature and religion. Chinese culture itself is highly complex, and the other East Asian cultures also reflect local circumstances and traditions. For instance the (later) Chinese ideal of a scholar-gentleman contrasts strongly with Japanese warrior ideals.

Project Syndicate - A World of Ideas What we do Project Syndicate produces and delivers original, high-quality commentaries to a global audience. Featuring exclusive contributions by prominent political leaders, policymakers, scholars, business leaders, and civic activists from around the world, we provide news media and their readers cutting-edge analysis and insight, regardless of ability to pay. Our membership now includes nearly 500 media outlets – more than half of which receive our commentaries for free or at subsidized rates – in more than 150 countries. Project Syndicate’s Network of Member Publications Growth of Project Syndicate’s Member Publications untitled References Agustí, J. and M. Antón. 2002 Mammoths, Sabertooths, and Hominids: 65 Million Years of Mammalian Evolution in Europe. Columbia University Press, New York. Allard, M. W., R.

Buddha Teachings Following the Buddha's FootstepsInstilling Goodness SchoolCity of Ten Thousand BuddhasTalmage, CA 95481 As a child, Siddhartha the Buddha, was troubled by some of the same thoughts that children today have. They wonder about birth and death. They wonder why they get sick and why grandfather died. They wonder why their wishes do not come true. Internet History Sourcebooks Internet Modern History Sourcebook The Internet Modern History Sourcebook now contains thousands of sources and the previous index pages were so large that they were crashing many browsers. See Introduction for an explanation of the Sourcebook's goals. Explanation of Sources of Material Here. Coursera About the Course Many students leave high school without being prepared for the rigors of college chemistry. This course is designed to give students the opportunity to review topics at a pace conducive to their level, whether they are encountering the material for the first time or are using the course as a refresher. Allison Soult and Kim Woodrum bring their experience to the course covering atomic structure, periodic trends, compounds, reactions, stoichiometry, and thermochemistry. Instruction consists of concepts, calculations, and video demonstrations of the principles being discussed. Practice problems and end of unit assessments will help students gauge their understanding of the material.