A global guide to the first world war - interactive documentary 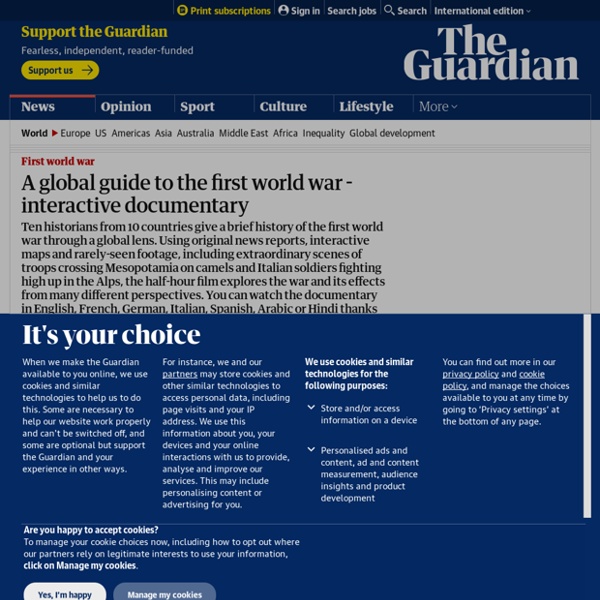 Holocaust and Related Maps — United States Holocaust Memorial Museum The Museum’s mapping initiatives overlay key Holocaust sites and historical content from the Museum’s collections on Google Earth and other maps to enable visitors to explore Holocaust history. Download and install Google Earth (external link) Mapping and Geography Initiatives Holocaust History Animated Maps These animated maps document topics in Holocaust history, including Auschwitz, Dachau, Lodz, Warsaw, World War II and the Holocaust, resistance, rescue, liberation, the voyage of the St. How the Potato Changed the World When potato plants bloom, they send up five-lobed flowers that spangle fields like fat purple stars. By some accounts, Marie Antoinette liked the blossoms so much that she put them in her hair. Her husband, Louis XVI, put one in his buttonhole, inspiring a brief vogue in which the French aristocracy swanned around with potato plants on their clothes. The flowers were part of an attempt to persuade French farmers to plant and French diners to eat this strange new species. Today the potato is the fifth most important crop worldwide, after wheat, corn, rice and sugar cane.

The Holocaust in Contemporary Maps © Harrie Teunissen Leiden/Bad Arolsen May-July 2013 Harrie Teunissen and his partner John Steegh are map-collectors from Leiden in Holland. Their jointly build up collection of some 9500 maps and 1300 atlasses and travel guides, mostly from 1750 – 1950, focuses on water management, city development, ethnic relations and military conflicts. They organise exhibitions based on this collection, like ‘The Balkans in maps, five centuries of struggle about identity’ (Leiden University Library 2003). Statues are not the issue. These are ‘history wars’, a battle over the past As a teenager growing up in Newcastle, I played a small role in a long campaign of attrition waged by my generation against the city council. Our single objective was to ensure that by the end of each weekend the statues of central Newcastle all had a traffic cone on their heads, or had been made to look silly in some other way. As well as providing them with traffic cone hats (the classic), we balanced empty beer bottles on the outstretched hands of those statues striking heroic poses.

WWII map doodles reveal what rank and file thought of Adolf Hitler's plans Nazi forces had stormed across Europe, sweeping all before them. The only major European power standing in their way was Britain, separated from the all-conquering German army by just the width of the English Channel. On August 12th 1940 the Battle of Britain began when the Luftwaffe began an aerial assault on RAF forces and airfields. This map from the Imperial War Museum (detail above, full map below) shows German plans for Operation Sealion - the invasion of Britain. As well as marking the arrangement of German forces massing in France and planned invasion routes across the English Channel, the map shows some creative doodled additions.

History in Dispute: Charlottesville and Confederate Monuments Teaching with the News Objectives Students will: Understand the idea of historical memory. Contextualize recent events in Charlottesville within a larger historical controversy. Bomber Command maps reveal extent of German destruction Image copyright AP The scale of devastation wreaked on Germany by RAF Bomber Command in World War Two has been revealed in detail in rare maps, published for the first time. The bomb damage diagrams are aerial photographs of Berlin, Cologne and Dresden, overlaid with coloured areas indicating how much damage was caused by the strategic bombing campaign. They were included in the campaign's so-called Blue Books - used as propaganda to justify the bombing raids. The maps, held in the Imperial War Museum's archives, have been collated by military cartography historian Peter Chasseaud. On the following four maps, colour coding is used:

How to write better essays: 'nobody does introductions properly' As the government begins its crackdown on essay mill websites, it’s easy to see just how much pressure students are under to get top grades for their coursework these days. But writing a high-scoring paper doesn’t need to be complicated. We spoke to experts to get some simple techniques that will raise your writing game. First World War maps - McMaster's map archive magazine / oct15 October 2015 issue Connecting to the past through McMaster's treasure trove of historical maps from the war By Brian Banks Click for interactive map Click on this image to explore and zoom in on tiled historical maps from the First World War (All items in Digital Archive are licensed under Creative Commons Attribution-NonCommercial 2.5 License, unless otherwise indicated.)

For King and Country John Henry Cartwright's Gallipoli campaign 1914-1915 In 1914, like many Australians of his generation, John Henry Cartwright answered the call and enlisted in the Australian Imperial Forces (AIF) to serve 'King and Country' and to fight in the 'Gallipoli' campaign of World War I. His route to the Gallipoli campaign took him from Korumburra, a small country town in Victoria, Australia, to the Broadmeadows training camp and then on to Egypt, Greece and then to the Dardenelles. This is the story of his journey, illustrated through a collection of digital artifacts brought together by his descendent William Cartwright AM. John Henry was his great uncle and brother of his paternal grandfather.