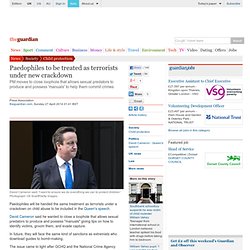 David Cameron said he wanted to close a loophole that allows sexual predators to produce and possess "manuals" giving tips on how to identify victims, groom them, and evade capture. In future, they will face the same kind of sanctions as extremists who download guides to bomb-making. The issue came to light after GCHQ and the National Crime Agency found online examples of the guides in the chaotic part of cyberspace known as the "dark web".

The prime minister told the Sunday Times: "It's completely unacceptable that there is a loophole in the law which allows paedophiles to write and distribute these disgusting documents. Home Office 'gave Paedophile Information Exchange £70,000' Police are investigating the claims made by a whistleblowerCallaghan and Thatcher governments may have provided fundingClaims come after links between the group and NCCL are exposed By Paul Bentley Published: 23:00 GMT, 2 March 2014 | Updated: 15:25 GMT, 3 March 2014. 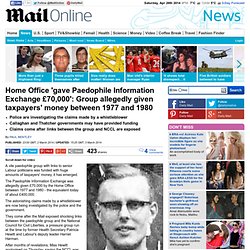 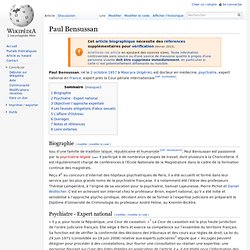 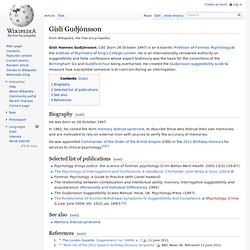 He is an internationally renowned authority on suggestibility and false confessions whose expert testimony was the basis for the convictions of the Birmingham Six and Guildford Four being overturned. He created the Gudjonsson suggestibility scale to measure how susceptible someone is to coercion during an interrogation. Biography[edit] He was born on 26 October 1947. In 1982, he coined the term memory distrust syndrome, to describe those who distrust their own memories and are motivated to rely on external (non-self) sources to verify the accuracy of memories. He was appointed Commander of the Order of the British Empire (CBE) in the 2011 Birthday Honours for services to clinical psychology.[1][2] Selected list of publications[edit] See also[edit]

UK Government study of childhood ritual abuse. About The FMSF. History of the FMS Foundation A group of families and professionals affiliated with the University of Pennsylvania in Philadelphia and the Johns Hopkins Medical Institution in Baltimore created the False Memory Syndrome Foundation in 1992 because they saw a need for an organization that could document and study the problem of families that were being shattered when adult children suddenly claimed to have recovered repressed memories of childhood sexual abuse. 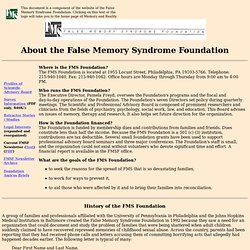 Across the country, parents had been reporting that they had received phone calls and letters accusing them of committing horrifying acts that allegedly had happened decades earlier. The following letter is typical of many: Dear First Name and Last Name, Why am I writing this letter: To state the truth -- Dad I remember just about everything you did to me. Memory and Reality. Who is affected ? Recovered Memory Project » A Journalist Reconsiders the FMSF. A Brief Overview Of The Founding Members Of The False Memory Syndrome Foundation. Donald Ewen Cameron. Dallam - Crisis or Creation? 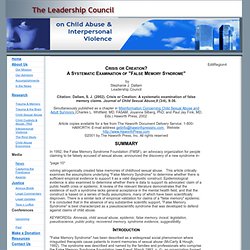 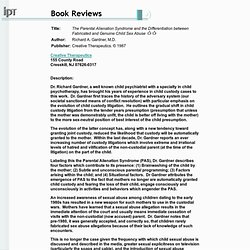 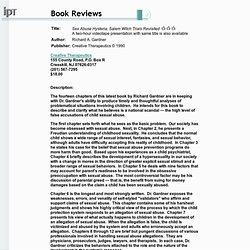 Box R Cresskill, NJ 07626-0317 (201) 567-7295 $18.00 Description: The fourteen chapters of this latest book by Richard Gardner are in keeping with Dr. Pire Review / from. L'aliénation parentale: un concept controversé mais réel. Lord McAlpine to sue 10,000 Twitter users for untrue paedophile accusations. Pay up, twits: Lord McAlpine will also go after celebrities for untrue pervert accusations Celebrity Twitter users were last night bracing themselves for a barrage of lawsuits from Lord McAlpine after he was wrongly accused on the social network site of being a child molester. 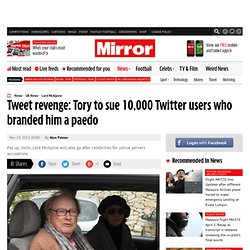 The Tory grandee is expected to sue at least 10,000 people over the malicious claims that appeared in the wake of a BBC Newsnight investigation into a paedophile ring at care homes in North Wales. And he could hit high-profile tweeters such as Speaker’s wife Sally Bercow and comedian Alan Davies who both mentioned the peer on their accounts. The sensational move could involve the largest number of defendants in British legal history.

Twitter. The people who believe that Satanists might eat your baby. Satanic abuse no myth, say experts - This Britain - UK. A specially commissioned government report will this week conclude that satanic abuse does take place in Britain. 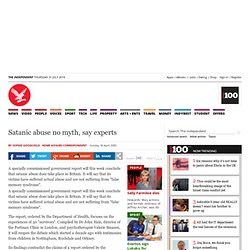 It will say that its victims have suffered actual abuse and are not suffering from "false memory syndrome". The report, ordered by the Department of Health, focuses on the experiences of 50 "survivors". Patricia Hewitt linked to paedophile group's calls for age of consent to be just TEN. MP Sir Cyril Smith dramatically unmasked as paedo in Commons. Cyril Smith: fears grow of abuse cover-up. Fears of an establishment cover-up of sex abuse allegations involving the former Rochdale MP Sir Cyril Smith are growing after claims a special branch officer tried to prevent detectives interviewing a man who alleged that Smith abused young boys.

Paul Foulston, 65, a former detective constable with Thames Valley police, told the Guardian he was working on a routine murder inquiry in 1976 when two special branch officers intercepted him at a remand centre where he was due to interview a 20-year-old suspect. They ordered him to turn back because they were "working on an inquiry relating to an MP" and the suspect should not be interviewed. After a row in the car park, Foulston and his senior officer ignored the demand and went ahead.