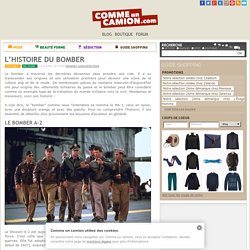 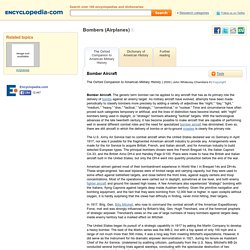 The generic term bomber can be applied to any aircraft that has as its primary role the delivery of bombs against an enemy target. As military aircraft have evolved, attempts have been made periodically to classify bombers more precisely by adding a variety of adjectives like “night,” “day,” “light,” “medium,” “heavy,” “dive,” “tactical,” “strategic,” “conventional,” or “nuclear.”

Time and circumstance have often proved such categories temporary or artificial, and the lines of distinction have become blurred, with “night” bombers being used in daylight, or “strategic” bombers attacking “tactical” targets. With the technological advances of the late twentieth century, it has become possible to make aircraft that are capable of performing well in several different combat roles and the need for specialized bomber aircraft has diminished. Even so, there are still aircraft in which the delivery of bombs or air‐to‐ground missiles is clearly the primary role. The U.S. Ron Dick. Midwest Vintage. The history of the Flight Jacket has had a long and colorful history from it’s inception during the early 1900’s. 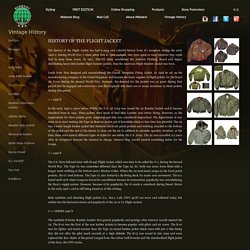 During World War I, when pilots flew in open cockpits, they were quick to wear whatever they could find to keep them warm. In 1917, The US Army established the Aviation Clothing Board and began distributing heavy duty leather flight bomber jackets, thus the American Flight Bomber Jacket was born. Leslie Irvin first designed and manufactured the Classic Sheepskin Flying Jacket. A Style History Through Cinema. The evolution of the bomber jacket has gone from fighter pilots, to skinheads, to the backs of regular Joes everywhere. 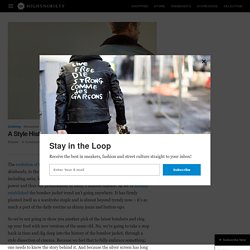 Its many iterations, including satin, leather, collared or collarless, are all testament to its staying power and thus our predicament in today’s fashion climate. As we’ve already established the bomber jacket trend isn’t going anywhere. It has firmly planted itself as a wardrobe staple and is almost beyond trendy now – it’s as much a part of the daily routine as skinny jeans and button-ups.

So we’re not going to show you another pick of the latest bombers and clog up your feed with new versions of the same old. Men's bomber jackets. The bomber jacket is always meant to appear on the runway during autumn and winter, both as a true testament to its iconic status as a piece of menswear, and to its versatility taking many forms. 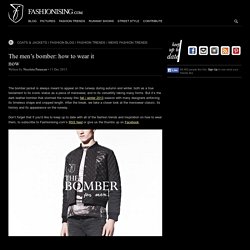 But it’s the dark leather bomber that stormed the runway this fall / winter 2013 season with many designers enforcing its timeless shape and cropped length. After the break, we take a closer look at the menswear classic, its history and its appearance on the runway. Don’t forget that if you’d like to keep up to date with all of the fashion trends and inspiration on how to wear them, to subscribe to Fashionising.com’s RSS feed or give us the thumbs up on Facebook. The history of the Bomber jacket. Sans titre. Kate Moss and the Bomber Jacket of Fall 2014. The Sundance Film Festival kicks off today in Park City, Utah—not the most familiar climate for an industry that’s been planted on the West Coast since the early 1900s. 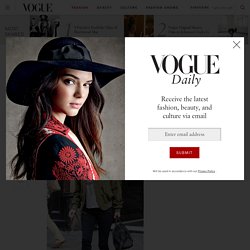 So how does one stay stylishly bundled, fresh-faced, and red-carpet ready while event-hopping at the preeminent independent film festival in the U.S.? According to these actresses who are heading to a week of screenings, photocells, and parties, it’s not just about lots of layers: From Zipper’s Dianna Agron, who keeps a pair of boxing gloves handy for travel, to Mississippi Grind star Analeigh Tipton, who favors cozy Icelandic wool sweaters, here are what four Sundance stars are packing in their suitcases. Dianna Agron See more photos of: More Vogue may earn compensation on these sales through affiliate programs.

Any special beauty regimes to avoid dry winter skin? When I travel I try to always carry H. Tom Ford’s Tobacco Vanille is my new favorite scent. Nothing takes off your eye makeup better than baby oil. Julia Garner. MA-1 bomber jacket. Flight jackets, varsity jackets & aviator jacket styles. Flying Jackets – The Irvin Story. Leslie Irvin was the inventor of the parachute “rip-cord” system and, in 1919, was the first man to make a premeditated free-fall jump from an aeroplane. 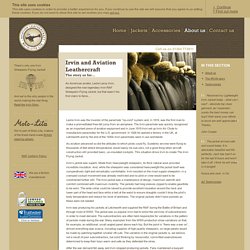 The Irvin parachute was quickly recognised as an important piece of aviation equipment and in June 1919 Irvin set up Irvin Air Chute to manufacture parachutes for the U.S. government. In 1926 he opened a factory in the UK, at Letchworth and by the end of the 1930s Irvin parachutes were in use worldwide. As aviation advanced so did the altitudes to which pilots could fly. Suddenly aircrew were flying to thousands of feet where temperatures would easily be sub-zero, not a good thing when aircraft construction still provided basic, un-insulated cockpits. This situation drove Irvin to create The Irvin Flying Jacket. Pièce maitresse de la mode cette saison: le bomber ou teddy, et comment le porter. Le bomber retrouve ses lettres de noblesse cette saison. 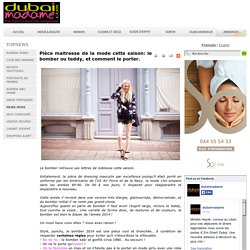 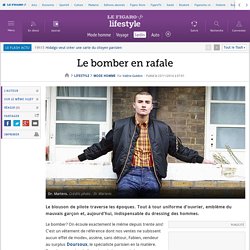 Tout à tour uniforme d'ouvrier, emblème du mauvais garçon et, aujourd'hui, indispensable du dressing des hommes. HISTORY OF BOMBER JACKET - The Man and Glam. Fashion world has recentely gone crazy about bomber jackets and, whether we like it or not, it will be a part of the fashion landscape for a very long time. 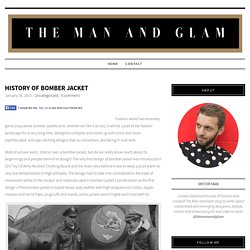 Designers compete and come up with more and more sophisticated and eye catching designs that us, consumers, are falling in love with. Most of us have worn, tried or own a bomber jacket, but do we really know much about its beginnings and people behind its design? The very first design of bomber jacket was introduced in 1917 by US Army Aviation Clothing Board and the main idea behind it was to keep a pilot warm at very low temperatures in high altitudes.

The history of the bomber jacket. Many iconic menswear pieces are derived from military clothing, such as the double-breasted trench coat, the white t-shirt, khaki pants and the flight jacket, or bomber. The US military, notorious for pursuing maximum efficiency and productivity, surprisingly focused on designing comfortable functional pieces. Servicemen often brought these innovative styles back to their civilian lives, where they gained more mainstream popularity. Chris Sullivan On The History Of The Bomber Jacket. L'histoire du bomber. The bomber jacket. History of the MA-1. B-52 Crew 644th BS, 410th Bombardment Wing, 1966 via Jet Pilots Overseas The MA-1 bomber jacket is a US Air Force garment that has endured over four decades of history and transcended its utilitarian beginnings to become an iconic item in pop-culture and fashion. Much of modern menswear design has been based on the military designs of the past and assessing the history of the MA-1 is prime example of how military garments make their transition to civilian use.

The MA-1 remains one of my all time favorite clothing designs and I’ve taken the time to put together this post as a tribute to the MA-1. The history of the Bomber jacket. Museum of London Blog » Bomber Jackets. Jim Rice, British Movement, Welling, Kent, 1980 (© JIM RICE – WWW.LONDONPHOTO.CO.UK)(The number bottom right is not part of the photo.) A few weeks ago I found myself surrounded by fascists. I was on my way to the West End when at Tower Hill station a large group of French-speaking men with assorted girlfriends and wives (I presume) entered my tube carriage.