Villa Savoye: The five points of architecture. AD Classics: Ville Radieuse / Le Corbusier. Ville Radieuse (The Radiant City) is an unrealized urban masterplan by Le Corbusier, first presented in 1924 and published in a book of the same name in 1933. 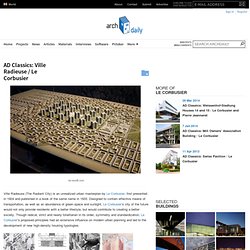 Designed to contain effective means of transportation, as well as an abundance of green space and sunlight, Le Corbusier’s city of the future would not only provide residents with a better lifestyle, but would contribute to creating a better society. Though radical, strict and nearly totalitarian in its order, symmetry and standardization, Le Corbusier’s proposed principles had an extensive influence on modern urban planning and led to the development of new high-density housing typologies. In accordance with modernist ideals of progress (which encouraged the annihilation of tradition), The Radiant City was to emerge from a tabula rasa: it was to be built on nothing less than the grounds of demolished vernacular European cities. 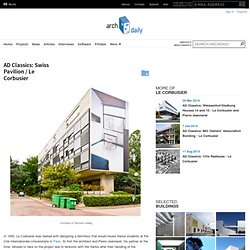 At first the architect and Pierre Jeanneret, his partner at the time, refused to take on the project due to tensions with the Swiss after their handling of the architects’ proposal for the League of Nations competition. Eventually, however, they agreed to see it through and worked on a very limited budget, which led the building to become a summation of Le Corbusier’s modern principles, forcing him to focus on dwelling before all else. Projects. LE CORBUSIER. LE CABANON Fundación Caja de Arquitectos. Le Corbusier. Proyectos 4 etsa . + fondation lecorbusier El proyecto consta de una serie de viviendas unifamiliares de dos plantas. 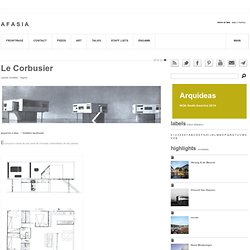 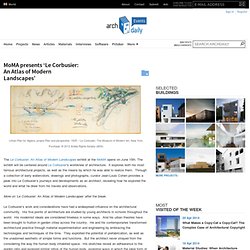 The exhibit will be centered around Le Corbusier‘s worldview of architecture. It explores both his most famous architectural projects, as well as the means by which he was able to realize them. Through a collection of early watercolors, drawings and photographs, curator Jean-Louis Cohen provides a peak into Le Corbusier’s journeys and developments as an architect, revealing how he explored the world and what he drew from his travels and observations. More on ‘Le Corbusier: An Atlas of Modern Landscapes’ after the break. Le Corbusier’s work and considerations have had a widespread influence on the architectural community. As an architect, Le Corbusier grew from his own theories, explored new forms and new ways to express space and occupancy. Urban Plan for Algiers, project Plan and perspective. 1935. / Le Corbusier; The Museum of Modern Art, New York. Villa Savoye Poissy-sur-Seine, France. 1929-31. Centre Le Corbusier (Heidi Weber Museum) / Le Corbusier.

Iconic for its floating steel roof and brightly colored panels, the Centre Le Corbusier is the last building Le Corbusier designed before his death in 1965. 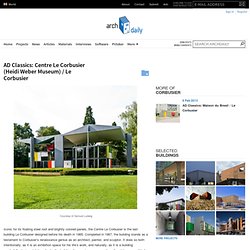 Completed in 1967, the building stands as a testament to Corbusier’s renaissance genius as an architect, painter, and sculptor. It does so both intentionally, as it is an exhibition space for his life’s work, and naturally, as it is a building masterfully designed. Interestingly, the building diverges in some ways from the style responsible for his renown – concrete, stone, uniform repetition, etc. Maison du Bresil / Le Corbusier. Created as a microcosm of Brazilian life and culture, Maison du Bresil is a significant example of Le Corbusier’s high-density residential design. 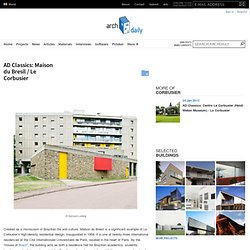 Inaugurated in 1959, it is one of twenty-three international residences at the Cité Internationale Universitaire de Paris, located in the heart of Paris. As the “House of Brazil”, the building acts as both a residence hall for Brazilian academics, students, teachers, and artists, and as a hub for Brazilian culture, by providing exhibition spaces and archival resources. Rare images of Le Corbusier by Willy Rizzo, in color. It’s hard to imagine Le Corbusier – the bespectacled legend of 20th century Modernism, known for his ultra-clean aesthetics – as living in the everyday, messy world that we all inhabit. 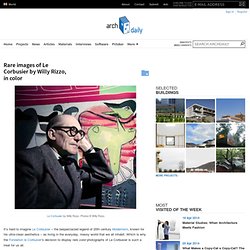 Which is why the Fondation le Corbusier‘s decision to display rare color photographs of Le Corbusier is such a treat for us all. The photographs were taken for the magazine Paris Match in 1953 by Willy Rizzo, a fashion photographer better known for his shots of 1950s stars and starlets. The images depict the then 66-year-old Corbusier in various spots about Paris: the Musée National d’Art Moderne, his apartment, in front of a blackboard (sporting a sketch of Unité d’Habitation). In her Fast Company article, Kelsey Campbell-Dollaghan explains that these images give us a glimpse of the man behind the myth: “Even the way we talk about him now, as Le Corbusier, refers to an idea as much as a person. 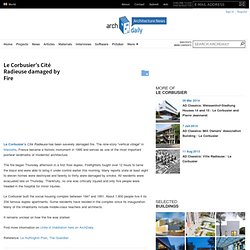 The nine-story “vertical village” in Marseille, France became a historic monument in 1995 and serves as one of the most important postwar landmarks of modernist architecture. The fire began Thursday afternoon in a first floor duplex. Firefighters fought over 12 hours to tame the blaze and were able to bring it under control earlier this morning. Many reports state at least eight to eleven homes were destroyed and twenty to thirty were damaged by smoke. All residents were evacuated late on Thursday. Chandigarh Secretariat / Le Corbusier. This AD Classic was done in collaboration with John Rizor. 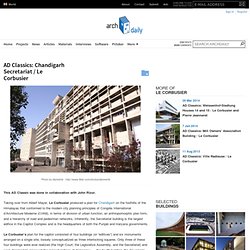 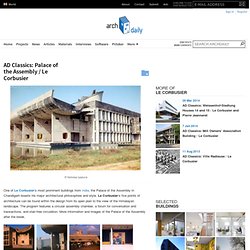 Le Corbusier‘s five points of architecture can be found within the design from its open plan to the view of the Himalayan landscape. The program features a circular assembly chamber, a forum for conversation and transactions, and stair-free circulation. More information and images of the Palace of the Assembly after the break. The first of Le Corbusier’s architectural ideals is the use of pilotis to lift the structure off of the ground. Reinforced concrete columns are utilized in a grid throughout the Palace of the Assembly and are slightly altered to raise a large swooping concrete form high above the entrance.

Villa Roche / Le Corbusier. Designed 1923-1925 as a residence for Swiss banker Raoul La Roche, Villa Roche is the quintessence of Le Corbusier’s modern approach to housing. The Villa acted as an exhibition space for Mr. Roche’s collection of avant-garde artwork, and is a pure assemblage of spatial volumes that interlocks the dual programs of domicile and gallery. More on Villa Roche after the break. The promenade through Villa Roche plays a significant role in linking these two programs into one; its hierarchy is a theme inspired by Corbusier‘s visit to the Acropolis. Church at Firminy / Le Corbusier. Known for its striking form and beautiful interior experiences, the Church at Firminy by Le Corbusier was another evolution of the core thoughts and practices of the architect throughout his many years of designing.

This church also carries special significance, as it was the last major work of Le Corbusier and was left unfinished upon his death in 1965. It was finished forty-one years after his death in 2006, keeping his essence alive. Le Corbusier couvent sainte-marie de la tourette . eveux-sur-l'arbresle. Photos: © Jonathan Letoublon Photographie . + fondation le corbusier. Convent of La Tourette / Le Corbuiser. The Convent of La Tourette is Le Corbusier’s final building completed in Europe, and is also thought by many to be his most unique program. It was built to be a self-contained world for a community of silent monks, and to accommodate the unique and specific lifestyle of the monks, the monastery is made of one hundred individual cells, a communal library, a refectory, a rooftop cloister, a church, and classrooms. The one request to the architect by Father Marie-Alain Couturier was that he “create a silent dwelling for one hundred bodies and one hundred hearts.”