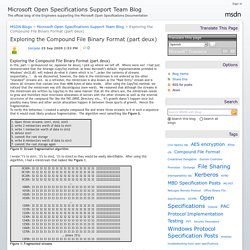 Where were we? I had just demonstrated that the IStorage::CopyTo() method, at least Microsoft’s default implementation provided in Windows’ ole32.dll, will indeed do what it claims which is to “…order the contents of streams sequentially…". As we discovered, however, the data in the ministream is not ordered as the other “standard” streams are. As a refresher, the ministream is also known as the “Root Entry” stream and is where all streams that contain less than 4096 bytes of data reside. To verify this behaviour, I created a sample compound file and wrote three streams to it in such a sequence that it would most likely produce fragmentation. Figure 0: Stream fragmentation algorithm I wrote ‘1’s to stm1, ‘2’s to stm2, ‘3’s to stms3 so they would be easily identifiable. Figure 1: Fragmented streams Here's the pseudo code for the algorithm:

Js-xlsx/18_cfb.js at master · SheetJS/js-xlsx. Uncompressing Documents. Introduction Whilst writing in a somewhat ad-hoc fashion about the new, OOXML, Documents, I responded to a forum post about how to read the old format documents outside of Office applications. 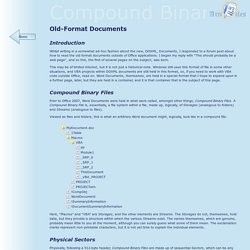 I began my reply with "This should probably be a web page", and so this, the first of several pages on the subject, was born. This may be of limited interest, but it is not just a historical note. Windows still uses this format of file in some other situations, and VBA projects within OOXML documents are still held in this format, so, if you need to work with VBA code outside Office, read on. Word Documents, themselves, are held in a special format that I hope to expand upon in a further page, later, but they are held in a container, and it is that container that is the subject of this page. 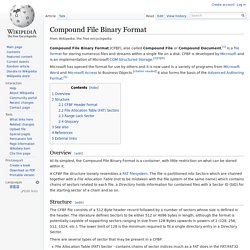 CFBF is developed by Microsoft and is an implementation of Microsoft COM Structured Storage.[2][3][4] Microsoft has opened the format for use by others and it is now used in a variety of programs from Microsoft Word and Microsoft Access to Business Objects. [citation needed] It also forms the basis of the Advanced Authoring Format.[5] Overview[edit] Expliqué simplement... Although the march of progress steadily tramples the old tried and true in favor of enlightened file formats designed for the new era of the web, some of us take joy in digging deeper into bits and bytes of binary file formats. 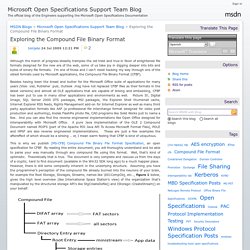 I’m one of those and I can’t resist hacking my way through one of the oldest formats used by Microsoft applications, the Compound File Binary Format (CFBF). Besides having been the bread and butter for the Microsoft Office suite of applications for many years (Visio .vsd, Publisher .pub, Outlook .msg have not replaced CFBF files as their formats in the latest versions) and almost all OLE applications that are capable of linking and embedding, CFBF has been put to use in many other applications and environments as well. Apache POI - the Java API for Microsoft Documents. Le format CBF expliqué dans OpenOffice. FYI: LAOLA file system, Mar/23/97.

One day I started writing some program that should have access to documents done with Microsoft Word for Windows 6. 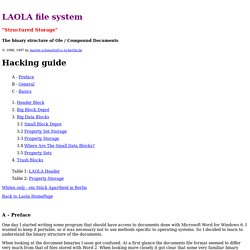 I wanted to keep it portable, so it was necessary not to use methods specific to operating systems. So I decided to learn to understand the binary structure of the documents. When looking at the document binaries I soon got confused. Récent et complet. 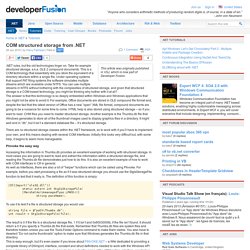 Take for example structured storage, a.k.a. OLE 2 compound documents. This is a COM technology that essentially lets you store the equivalent of a directory structure within a single file. Under operating systems that support FAT filing systems the software simulates multiple streams which are available under NTFS. The answer is that this technology is so deeply embedded within Windows and Windows applications that you might not be able to avoid it. There are no structured storage classes within the .NET framework, so to work with it you’ll have to implement your own, and this means dealing with several COM Interfaces. PInvoke the easy way Accessing the information in Thumbs.db provides an excellent example of working with structured storage. [MS OLEDS] A_guide_to_table_formatting.pdf. How_to_retrieve_text_from_a_binary_doc_file.pdf.