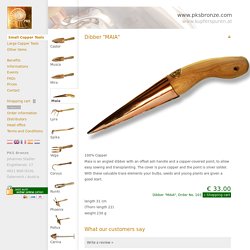 The cover is pure copper and the point is silver solder. With these valuable trace elements your bulbs, seeds and young plants are given a good start. length 31 cm (Thorn length 22) weight 230 g Why Copper Garden Tools? Copper gardening tools enrich the soils with coppertrace elements and thereby provide plants with essential nutrientsThey are hardwearing and will last for years Stay free of rust – but age with a graceful bronze patina, perfect for the coastal gardenerThey have sharp edges They have an incomparably longer lifespan than devices from ironViktor Schauberger came to the assessment that cultivating the soil with copper implements would be more beneficial to the Earth and lead to healthier plants. JOschman_HHW_0101208.pdf. Installation Guides. Accueil: Association Jacques Benveniste pour la Recherche. Installation Guides. Energie, eau. PurificationRechargement. Eau, constat gaspillages, pollutions... Nikola Tesla - The secrets hidden in the pyramids of Egypt. 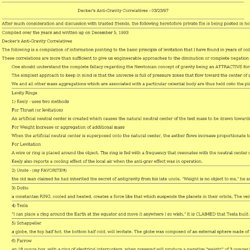 It does not matter who does it, just that it is available for use by everyone. Maybe others will find it useful. Compiled over the years and written up on December 5, 1993 Decker's Anti-Gravity Correlatives The following is a compilation of information pointing to the basic principle of levitation that I have found in years of collecting and analyzing levitation phenomena and which can be reduced to a basic set of "clues". These correlations are more than sufficient to give us engineerable approaches to the diminution or complete negation of what we term "weight" and "gravity". One should understand the complete fallacy regarding the Newtonian concept of gravity being an ATTRACTIVE force.

Viktor Schauberger Networking. (the New Group), whose aims are to explore Viktor & Walter Schauberger's theories and to interpret them in contemporary scientific idiom. 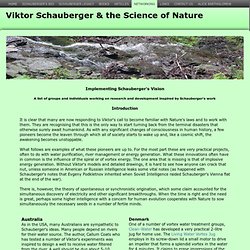 In 1967 the terms "environmental pollution" and "environmental protection" were virtually unheard of. At that time nobody demanded a gentle technology, friendly to Nature. In that year Walter Schauberger, a scientist who was then a 'lone voice', gave a lecture on "Biologically Oriented Technology", in the centre of the heavily polluted Ruhr (the main coal mining area of Germany).

Walter whose home was in Austria wanted to have an official German base. In response, Dr. Members of the Group have given many lectures at home and abroad on the theme of how to restore good heart to Nature and the environment as part of a requirement for a high quality of life. Implosion is a quarterly magazine founded in 1958 by Aloys Kokaly, generally aimed at the lay reader, which is still published quarterly or semi-annually by Klaus Rauber. U.K. Otmar Grober. This clip is from the documentary "Les Maîtres de l'Eau" which I found at:- Please click download instead of play Transcript: ...For certain scientists, research on water should go farther than problems about pollution. 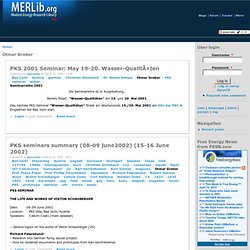 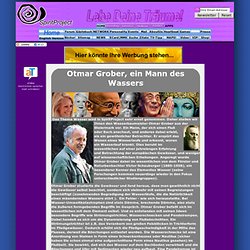 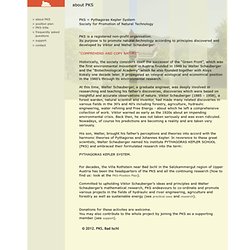 Its purpose is to promote natural technology according to principles discovered and developed by Viktor and Walter Schauberger: “COMPREHEND AND COPY NATURE”. Historically, the society considers itself the successor of the “Green Front”, which was the first environmental movement in Austria founded in 1949 by Walter Schauberger and the “Biotechnological Academy” which he also founded together with Aloys Kokaly one decade later. It propagated an integral ecological and economical position in the 1960’s through its environmental research. At this time, Walter Schauberger, a graduate engineer, was deeply involved in researching and teaching his father’s discoveries, discoveries which were based on insightful and accurate observations of nature.