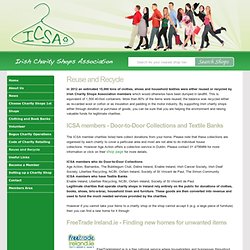 This is equivalent of 1,500 40-foot containers. More than 80% of the items were reused; the balance was recycled either as re-carded wool or cotton or as insulation and padding in the motor industry. By supporting Irish charity shops either through donation or purchase of goods, you can be sure that you are helping the environment and raising valuable funds for legitimate charities. ICSA members - Door-to-Door Collections and Textile Banks The ICSA member charities listed here collect donations from your home. However if you cannot take your items to a charity shop or the shop cannot accept it (e.g. a large piece of furniture) then you can find a new home for it through FreeTrade Ireland.ie - Finding new homes for unwanted items Waste Management Hierarchy: Fighting Bad Aid By Selling Second Hand T-Shirts Back to Americans. One of the topics that’s able to rile up the aid and development blogosphere is t-shirts. 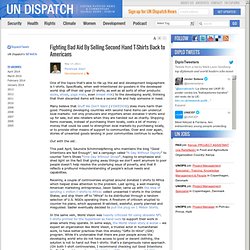 Specifically, when well-intentioned do-gooders in the developed world ship off their old gear (t-shirts, as well as all sorts of other products: socks, shoes, yoga mats, even breast milk) to the developing world, thinking that their discarded items will have a second life and help someone in need. Many believe that Stuff We Don’t Want (#SWEDOW) does more harm than good. Flooding developing countries with second hand items can undercut local markets: not only producers and importers when donated t-shirts wind up for sale, but also retailers when they are handed out as charity. Shipping items overseas, instead of purchasing them locally, costs a lot of money – money that could be used to strengthen local markets by purchasing locally, or to provide other means of support to communities.

Over and over again, stories of unwanted goods landing in poor communities continue to surface. Out with the old… Rwanda bans import of used underwear. RBS Deputy Director in charge of technical operations Eng. 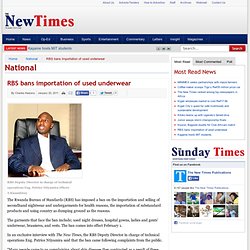 Patrice Ntiyamira (Photo T.Kisambira) The Rwanda Bureau of Standards (RBS) has imposed a ban on the importation and selling of secondhand nightwear and undergarments for health reasons, the importation of substandard products and using country as dumping ground as the reasons. The garments that face the ban include; used night dresses, hospital gowns, ladies and gents’ underwear, brassieres, and vests. The ban comes into effect February 1. In an exclusive interview with The New Times, the RBS Deputy Director in charge of technical operations Eng.

“Many people came to us complaining about skin diseases they contracted as a result of these garments,” Ntiyamira said yesterday, adding that most countries in the region had already imposed the ban. How Not To Be Clueless: Hurricane Sandy Victims Don’t Need Your Clothes. Stranded in my cable-free Williamsburg apartment this past week, it was impossible to escape the endless, heart-wrenching news reports on the nearby victims of Hurricane Sandy--and just as impossible to just sit there doing nothing. 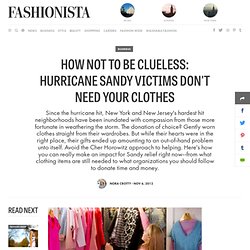 So I did what I deemed most feasible at the time--I spent an afternoon pulling items out of my closet and into a massive garbage bag labeled "donation. " What hurricane survivor wouldn't need my jeans and tees and whatever else I had thrown in there after losing practically everything? Well as it turns out--Hurricane Sandy survivors wouldn't. It seems I wasn't the only one taking the Cher Horowitz-approach to helping. Since the hurricane hit, New York and New Jersey's hardest hit neighborhoods have been inundated with compassion from those more fortunate in weathering the storm. "The National Guard (at least where we were) is only manning food and water donations. So (aside from money) what can you donate?

Europe's secondhand clothes brings mixed blessings to Africa. A third of all globally donated clothes end up in sub-Saharan Africa via wholesale rag houses, where they end up lining the streets or small boutiques such as this market at Katangua in Nigeria. 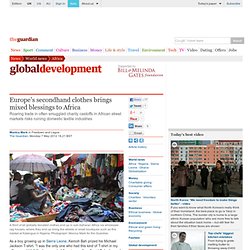 Photograph: Monica Mark for the Guardian As a boy growing up in Sierra Leone, Kemoh Bah prized his Michael Jackson T-shirt. "I was the only one who had this kind of T-shirt in my village, and I felt like I was part of American culture," said Bah, dressed head-to-toe in clothes emblazoned with logos outside his roadside secondhand clothes shack in the capital, Freetown. Nicknamed "junks" in Sierra Leone, hand-me-downs account for the majority of outfits in a country where seven out of 10 people live on less than $2 a day. The industry has ballooned to $1bn in Africa since 1990. About a third of globally donated clothes make their way via wholesale rag houses to sub-Saharan Africa, where they end up lining the streets or filling small boutiques.

Not every seller is so successful.