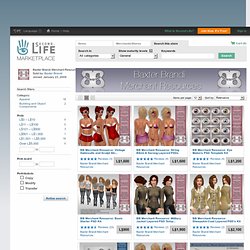 Basic Clothing Creation in Second Life - Part 1. How to make a Model Using Gimp. GIMP Clothing Tutorial: Creating an Outline or Template - Redwood Rhiadra Designs. KiRaDa Decosta - Service: Decosta Line Second Life Clothing Templates for gimp. A free Finished T-Shirt Template for use in Second Life, by Robin (Sojourner) Wood. Some time ago, someone mentioned in the Second Life forum that making a t-shirt in Second Life isn't as simple as just dropping a picture onto a shirt, like you would do for Café Press. 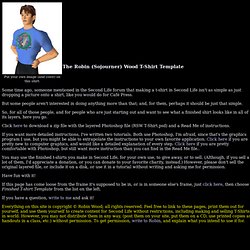 But some people aren't interested in doing anything more than that; and, for them, perhaps it should be just that simple. So, for all of those people, and for people who are just starting out and want to see what a finished shirt looks like in all of its layers, here you go. If you want more detailed instructions, I've written two tutorials. Both use Photoshop, I'm afraid, since that's the graphics program I use, but you might be able to extrapolate the instructions to your own favorite application. Click here if you are pretty new to computer graphics, and would like a detailed explanation of every step. 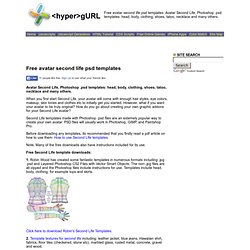 When you first start Second Life, your avatar will come with enough hair styles, eye colors, makeup, skin tones and clothes etc to initially get you started. Clothing design tutorials for clothing in Second Life... Life can be a pain some times, and living in a country that goes out of its way to control and manipulate its people doesn't help. 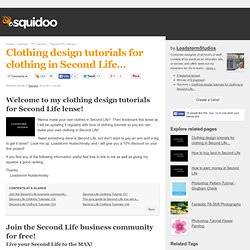 Alcohol and tobacco companies make billions each year selling their deadly drugs, but the United States continues to suppress marijuana and other marijuana related products due to the government's involvement with the alcohol and tobacco companies. Each year the government imposes more and more taxes on both these drugs, and continues to line their own personal pockets with the tax money as well as the money they make persecuting people for possession of marijuana. God created marijuana for all of us, it grows in nearly any environment, and smoking marijuana involves no processing what so ever like Crack, Meth, Cocaine, Heroin, or LSD. Legalizing marijuana would create all kinds of jobs, new taxes to support the government's lazy butt, and keep the average pot head off the streets who are having to buy from shady drug dealers. 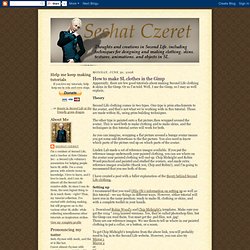 Or so I'm told. Well, I use the Gimp, so I may as well explain. Theory Second Life clothing comes in two types. One type is prim attachments to the avatar, and that's not what we're working with in this tutorial. The other type is painted onto a flat picture,then wrapped around the avatar. As you can imagine, wrapping a flat picture around a bumpy avatar means you get some odd distortions to the flat picture. Linden Lab made a set of reference images available. I have created a post with a fuller explanation of the theory behind Second Life clothing. Setting upI recommend that you read Olila Oh's information on setting up as well as this tutorial - we say things in different ways. 1. 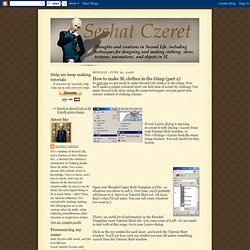 Now we'll make a simple coloured shirt: our first item of actual SL clothing. You make Second Life skins using the same techniques: you just paint skin colours instead of clothing colours. If your Layers dialog is missing, re-create it with Dialog->Layers from your Tutorial Shirt window, or File->Dialogs->Layers from the main Gimp window. You will need it for this lesson. Open your Blended Upper Body Template.xcf file - or whatever you chose to call it. There's an awful lot of information in the Blended Templates (now Tutorial Shirt) file.

Click on the eye symbol for each layer, and watch the Tutorial Shirt window. Clothing and skin designers make a lot of use of this selective visibility of layers. Our goal is to make a new layer, and on that layer, cover each of the UV grids with our favourite colour. So let's start by making a new layer. Move this layer so that it's under the UVs and above the background. Day 181: Creating Clothes with GIMP. If you have not created things in Second Life because graphics programs are expensive, then GIMP may be the answer. 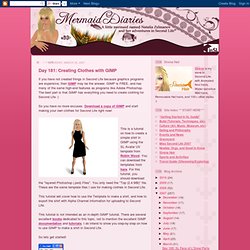 GIMP is FREE, and has many of the same high-end features as programs like Adobe Photoshop. Avatar UV Texture "Templates" for use in Linden Lab's Second Life - Tutorial © Robin Wood 2009. <p class="noScript">I notice you have Javascript turned off. 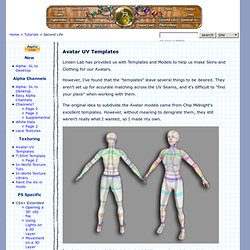 Unless you did that to print, the page is more fun if you turn it on. Thanks! </p> Linden Lab has provided us with Templates and Models to help us make Skins and Clothing for our Avatars. However, I've found that the "templates" leave several things to be desired. The original idea to subdivide the Avatar models came from Chip Midnight's excellent templates. I took the models, subdivided them in LightWave, and used the tools there to make Vector UV Maps for all the parts. A free Finished T-Shirt Template for use in Second Life, by Robin (Sojourner) Wood. Creating realistic clothing for SecondLife from start to finish! - by Naergi - Second Life on Koinup. In this video I'm showing how to create a realistic turtleneck sweater for a SecondLife avatar. 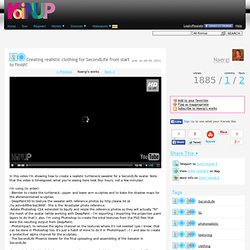 Note that the video is timelapsed; what you're seeing here took four hours, not a few minutes! I'm using (in order): - Blender to create the turtleneck, upper- and lower arm sculpties and to bake the shadow maps for the aforementioned sculpties; - DeepPaint3D to texture the sweater with reference photos by - this is the 'Anastazie' photo reference; -Adobe Photoshop CS4 extended to liquify and resize the reference photos so they will actually "fit" the mesh of the avatar (while working with DeepPaint - I'm exporting / importing the projection paint layers to do that!)