THE ULTIMATE TEST / Notoriously difficult and outrageously expensive to earn, the Master of Wine title is the wine professional's grail. And you thought college was tough. 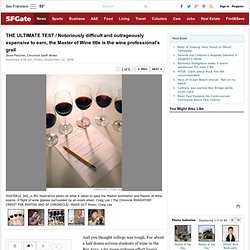 For about a half dozen serious students of wine in the Bay Area, a far more arduous effort looms, the notoriously grueling exam for the Master of Wine credential. Held once a year, the four-day test determines who can proceed to a dissertation, the final phase in achieving what many consider the Ph.D. of wine. By most accounts, acquiring Master of Wine status requires vast amounts of study time, frightening sums of money and the stomach for repeated failure. In the nearly two decades the exam has been open to Americans, only 24 have passed. Yet conversations with Bay Area wine pros who have earned the title, and with those who are trying, suggest that the program's storied difficulty is part of its allure. "This is one of those esoteric things you just decide to do to better yourself," says Anne Pickett, an 18-year veteran of K & L Wine Merchants, the Bay Area retailer, and an MW candidate.

More than supertasters Candidates culled. ISG: index. Master Sommeliers - who are they? This Friday 01 jul 05 the Court of Master Sommeliers Worldwide, established in 1977, will become an incorporated company limited by guarantee. 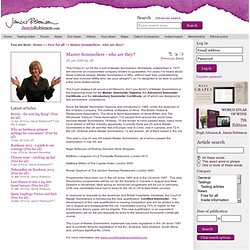 For years I’ve heard about these mythical people, Master Sommeliers or MSs, without ever fully understanding what was involved (MWs who can pour straight?) , so I’m delighted to be able to publish a few more details below. The Court (makes it all sound a bit Masonic, don’t you think?) Master of Wine. Master of Wine (MW) is a qualification (not an academic degree) issued by The Institute of Masters of Wine in the United Kingdom. 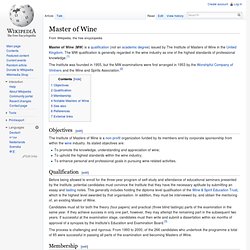 The MW qualification is generally regarded in the wine industry as one of the highest standards of professional knowledge.[1] The Institute was founded in 1955, but the MW examinations were first arranged in 1953 by the Worshipful Company of Vintners and the Wine and Spirits Association.[2] Objectives[edit] The Institute of Masters of Wine is a non-profit organization funded by its members and by corporate sponsorship from within the wine industry.

Its stated objectives are: To promote the knowledge, understanding and appreciation of wine;To uphold the highest standards within the wine industry;To enhance personal and professional goals in pursuing wine-related activities. Qualification[edit] Candidates must sit for both the theory (four papers) and practical (three blind tastings) parts of the examination in the same year. Membership[edit] See also[edit] Sommelier Certification: Sommelier Schools Offering Test Preperation, Training Courses & Exams. Origins The term 'sommelier' is derived from the French word 'soumelier'. 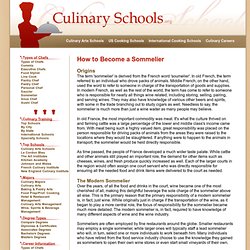 In old French, the term referred to an individual who drove packs of animals. Middle French, on the other hand, used the word to refer to someone in charge of the transportation of goods and supplies. In modern French, as well as the rest of the world, the term has come to refer to someone who is responsible for nearly all things wine related, including storing, selling, pairing, and serving wines. They may also have knowledge of various other beers and spirits, with some in the trade branching out to study cigars as well. In old France, the most important commodity was meat. As time passed, the people of France developed a much wider taste palate. Wine & Spirit Education Trust. Aldo Sohm. Wine & Spirit Education Trust. Award certification letter and pin for completion of the Level 3 program in Wine & Spirits. 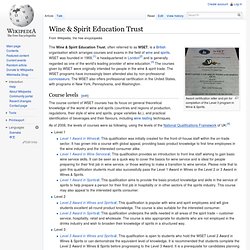 The Wine & Spirit Education Trust, often referred to as WSET, is a British organisation which arranges courses and exams in the field of wine and spirits. WSET was founded in 1969,[1] is headquartered in London[2] and is generally regarded as one of the world's leading provider of wine education.[3] The courses given by WSET were originally intended for people in the wine & spirit trade. The WSET programs have increasingly been attended also by non-professional connoisseurs. The WSET also offers professional certification in the United States, with programs in New York, Pennsylvania, and Washington. 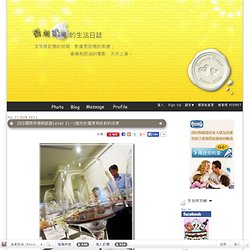