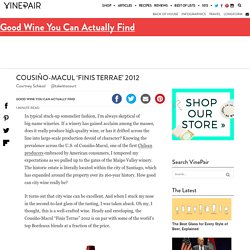 If a winery has gained acclaim among the masses, does it really produce high-quality wine, or has it drifted across the line into large-scale production devoid of character? Knowing the prevalence across the U.S. of Cousiño-Macul, one of the first Chilean producers embraced by American consumers, I tempered my expectations as we pulled up to the gates of the Maipo Valley winery. The historic estate is literally located within the city of Santiago, which has expanded around the property over its 160-year history. Jose Maria da Fonseca 'Periquita' Reserva 2013 Wine Review. Somm: Into The Bottle - The Film, Wines and More. If you can remember, the first Somm film (2012) dives full force into the lives of four sommeliers as they struggle for the title of Master Sommelier. 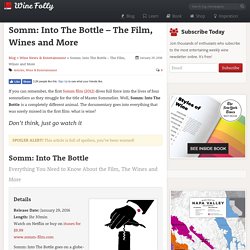 Well, Somm: Into The Bottle is a completely different animal. The documentary goes into everything that was sorely missed in the first film: what is wine? Don’t think, just go watch it. Best Red Wines Under $20 - Reverse Wine Snob® 7 Red And White Wines For Early Fall Drinking. Transitional seasonal drinking — it’s an art. 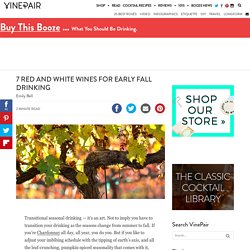 Not to imply you have to transition your drinking as the seasons change from summer to fall. If you’re Chardonnay all day, all year, you do you. But if you like to adjust your imbibing schedule with the tipping of earth’s axis, and all the leaf-crunching, pumpkin-spiced seasonality that comes with it, we’ve got some wine recs. Not that we’re saying goodbye to sun worship just yet.

These wines are more like a stepping stone, halfway clinging to the flip-flop refreshment factor of summer but also giving a nod to the contemplative sweater weather of fall. More contemplation, less rapid intoxication. Why Wine Insiders Are Obsessed with Lebanon's Château Musar. In an industry beset by trends, Château Musar, an 87-year-old Lebanese wine producer, has garnered a cult following. 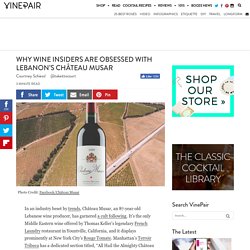 It’s the only Middle Eastern wine offered by Thomas Keller’s legendary French Laundry restaurant in Yountville, California, and it displays prominently at New York City’s Rouge Tomate. Manhattan’s Terroir Tribeca has a dedicated section titled, “All Hail the Almighty Château Musar.” When winemaker Serge Hochar died unexpectedly in December 2014, he was mourned in almost every major wine publication. How did Château Musar become the sole Middle Eastern producer to earn a spot on the international stage of wine icons? The Beirut-based Château Musar, founded in 1930 by Gaston Hochar, initially burst onto the international scene in 1979, when it dazzled attendees of the Bristol Wine Fair under the helm of Gaston’s son, Serge.

The Wines Every President Has Served From Eisenhower To Obama. Rule No. 1 for a successful dinner party: don’t talk politics. 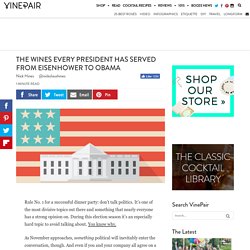 It’s one of the most divisive topics out there and something that nearly everyone has a strong opinion on. Somms Love Chenin Blanc, and You Will, Too. Sommeliers love Chenin Blanc. 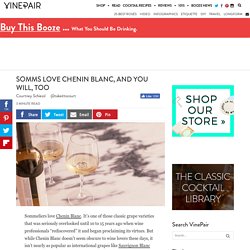 It’s one of those classic grape varieties that was seriously overlooked until 10 to 15 years ago when wine professionals “rediscovered” it and began proclaiming its virtues. But while Chenin Blanc doesn’t seem obscure to wine lovers these days, it isn’t nearly as popular as international grapes like Sauvignon Blanc and Chardonnay. Year after year, winemakers in its home region, the Loire Valley, continue to rip out Chenin Blanc vines in favor of these better-known money-makers. 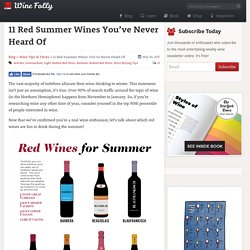 This statement isn’t just an assumption, it’s true. Over 90% of search traffic around the topic of wine (in the Northern Hemisphere) happens from November to January. The Star of Twin Peaks Makes the Best Celebrity Wine We've Ever Tasted. We were about 30 seconds into our call when Kyle MacLachlan said he had to ring me back; the 2016 vintage of his rosé, Blushing Bear, was at his door and he needed to bring in the delivery. 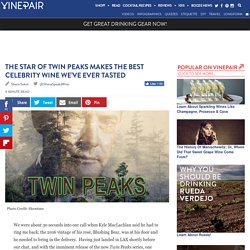 Having just landed in LAX shortly before our chat, and with the imminent release of the new Twin Peaks series, one would imagine rosé would be the last thing on the actor’s mind. However, it soon became apparent that “winemaker” is an important facet of MacLachlan’s identity. MacLachlan’s Walla Walla-based winery is called Pursued by Bear. It started as a hobby, but it has organically grown into a delicious representation of Washington wines. A Reporter at Large: The Jefferson Bottles.

The most expensive bottle of wine ever sold at auction was offered at Christie’s in London, on December 5, 1985. The bottle was handblown dark-green glass and capped with a nubby seal of thick black wax. It had no label, but etched into the glass in a spindly hand was the year 1787, the word “Lafitte,” and the letters “Th.J.” The bottle came from a collection of wine that had reportedly been discovered behind a bricked-up cellar wall in an old building in Paris.

The wines bore the names of top vineyards—along with Lafitte (which is now spelled “Lafite”), there were bottles from Châteaux d’Yquem, Mouton, and Margaux—and those initials, “Th.J.” Time to Try 'GSM': The Côtes du Rhône Blend. Some of the best wines in the world are blends of several grape varieties. 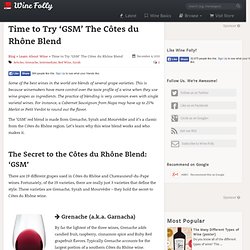 This is because winemakers have more control over the taste profile of a wine when they use wine grapes as ingredients. The practice of blending is very common even with single varietal wines. For instance, a Cabernet Sauvignon from Napa may have up to 25% Merlot or Petit Verdot to round out the flavor. The ‘GSM’ red blend is made from Grenache, Syrah and Mourvèdre and it’s a classic from the Côtes du Rhône region. The “New” California. California, the land of sunshine, free spirits, and big wines. 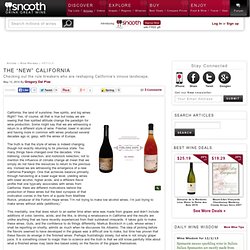 Right? Yes, of course, all that is true but today we are seeing that free spirited attitude change the paradigm for wine production. Some might say that we are witnessing a return to a different style of wine. Fresher, lower in alcohol and having more in common with wines produced several decades ago or, gasp, with the wines of Europe. The truth is that the style of wines is indeed changing, though not exactly returning to its previous state. This mentality, one that does return to an earlier time when wine was made from grapes and didn’t include additions of color, tannins, acids, and the like, is driving a renaissance in California and the results are unlike anything that we have recently experienced from their sunbaked vineyards. While all of these developments are exciting, they are not in fact new, though their blossoming in the industry is a new occurrence.

Edmunds St. 52% Vermentino, 48% Grenache Blanc. Beginners Guide to Decanting Wine. All you really needed to know about decanting wine in 2 minutes flat. How Long Should I Be Decanting Wine. A Guide to 10 Different Styles of Rosé Wine. Someone told you somewhere that rosé wine is both manly and sophisticated. You may not have believed them at the time —because of the pink hue—, but now at least you’re curious. So what are these gentleman-friendly rosé wines and which ones should you try? This simple guide outlines some of the most popular styles of rosé from around the world. There’s a new Chianti in Town. Many of us think of Chianti as an expensive, everyday wine but of course the truth of the matter is much more complex than that, and it just got even more complex.

Adding complexity where it is not necessary seems to be something the Italians excel at, and with the introduction of Chianti Classico Gran Selezione they may have just done just that. We already have a hierarchy with Chianti that includes Chianti, Chianti Classico, additional Chianti appellations, Chianti Riservas and, as of this year, Chianti Classico Gran Selezione. I was fortunate to be able to have tasted a line-up of these wie earlier this year at Prowein, the trade only wine fair held annually in Dusseldorf, Germany. For more information on this amazing event please check out: Why You Should be Going to Prowein.

Amazing Pinot Noir Wine Facts. Pinot Noir grape clusters are usually small and difficult to ripen evenly. The Guide to Pinot Noir Wine Pinot Noir is the most highly prized wine in the world. But why? It’s not as rich or big as its noble cousins, in fact it’s quite the opposite. Best Malbec Guide- The Top-Rated & Top-Value Malbec Wines. Diverse, rich and perfect for savoring slowly, Argentinean Malbec is America's current go-to red. By Michael Schachner. 5 Awesome Regions for Wines Under $15. Let’s play a game. The Best Red Wine For Beginners. Wp-content/uploads/2014/03/2014-wine-buying-cheat-sheet-final.pdf. Esoteric Wines Add Notches To Your Belt. The excitement over esoteric wines is equivalent to the special feeling when you find a four-leaf clover or see a rare bird. Learn Rioja Wine: Crianza to Gran Reserva. New World vs. Old World Wine. Vinum Cellars Paso Robles Zinfandel 2011 - An Easy Drinker.

Learn About Zinfandel Wine. Don’t turn your back on Zinfandel just yet. Once you learn its rich history in the United States and find out the nuances–and the good ones on the market, you’ll stock up for fall. 100 year-old head-trained Zinfandel–a method not common today. Getting to Know Washington Syrah. The first Washington syrah that made my toes curl : McCrea Boushey Vineyard 2005 Syrah.

8 Delicious Alternatives to Cabernet Sauvignon. Nearly every red wine lover has a special place in their heart for classic Cabernet Sauvignon. Free Horse Heaven Hills Wine Course. The New York Times Wine Club. Great Cabernet $50 to $75. On Tuesday I wrote with great pleasure about a group of Cabernets that were right about $25 a bottle, some less. They represented much of what I look for in Cabernet, and at an affordable price.

Today I turn my sights to wines that promise much more. At least they are priced in such a way as to promise much more, not that they always deliver. To a certain extent wines in this price range, $50 to $75 a bottle often under-deliver. Great Cabernet $50 to $75. Wine List: Top Cabernet $20-$25 Tasted 12/13. Wine by the Glass Problems and Solutions. The Mourvedre Wine Guide. The Top 5 Articles of 2013. Experts Pick The Best Oregon Pinot Noir. Cranberries and Dirt: Guide to Oregon Pinot Noir. Cahors = Côt = Malbec. Best Wines under 20 Dollars - Best Wines under $20. Wines Under 5 Dollars at Trader Joe's - Cheap Wine. 2001 Rioja is Perfect. Wine Gifts: Italy. Top 50 Portuguese Wines – According to Julia Harding of JancisRobinson.com.

Time to Try 'GSM': The Côtes du Rhône Blend. Confessions of a Wine Hater. How Does The Most Expensive Wine Taste? Famous Winemakers In California. Cabernet Sauvignon.