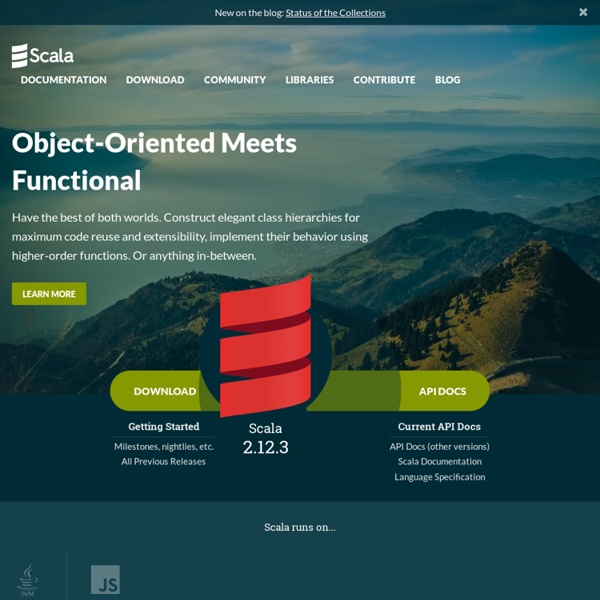 TCP/IP For Dummies Cheat Sheet Cheat Sheet As a network administrator, you know that TCP/IP is the glue that holds the Internet and the Web together. As well as being familiar with security terms and general definitions, you need to pay attention to RFCs (Requests for Comment) published by the Internet Engineering Task Force. You can comment on, learn from, and submit RFCs yourself. TCP/IP Definitions Knowing your way around TCP/IP is key if you want to manage a network successfully.

Scriptella Scriptella is an ETL (Extract-Transform-Load) and script execution tool. Its primary focus is simplicity. It doesn't require the user to learn another complex XML-based language to use it, but allows the use of SQL or another scripting language suitable for the data source to perform required transformations. Scala Collections for the Easily Bored Part 2: One at a Time 28 Jul 2008 As I hinted previously, this series is intended to delve into Scala’s extensive collections API and the many ways in which it can make your life easier. Probably the most important operations you could ever perform on collections are those which examine each element, one at a time. After all, what’s a more common array idiom than looping over all values?

Xcode Groups vs. Folder References — Trevor’s Bike Shed October 21st, 2012 | Mac, Software, Tips When adding a folder to an Xcode project, you can add it as a group or as a reference. What’s the difference, and why would you choose one over the other? Each has advantages and disadvantages, some of which are quite subtle. With groups, Xcode stores in the project a reference to each individual file.

The robo karate kid! Terrifying two legged giant robot being developed by Google learns to stand on one leg - and recreates scene from cult film ATLAS Robot built by Boston Dyanmics- which Google recently boughtDubbed Ian, the Atlas robot is 6ft 2in tall and weighs in at 330lbWas programmed to perform move by Florida team By Mark Prigg for MailOnline Published: 21:47 GMT, 10 November 2014 | Updated: 10:30 GMT, 11 November 2014 For fans of the cult film the Karate Kid, it is a familiar pose. However, in the latest video from the US military team developing a two legged fighting robot, the buildup to 'crane kick' is seen in a new way. The researchers taught the robot to stand on one leg - recreating a key scene from the film in the process.

scratchtab - A block programming language for Tablets About this project A development environment prototype for Android tablets. Created during a diploma thesis. Operating System: Android Minimum OS Version: 3.3 Tested on hardware: Motorola Xoom tablet The aim of this work was to examine the question of whether the block programming language metaphor is suitable for touch interfaces, by creating a working prototype of a block programming language for Android OS driven tablets. The busy Java developer's guide to Scala: Collection types For the Java™ developer learning Scala, objects provide a natural and easy point of entry. Over the past several articles in this series, I've introduced you to some of the ways that object-oriented programming in Scala really isn't much different from Java programming. I've also shown you how Scala revisits traditional object-oriented concepts, finds them wanting, and reinvents them for the 21st century.

Microsoft Excel Automation Class Excel Automation: Class to Start Microsoft Excel and Access Basic Excel Functions from a C++ Application This example implements OLE and IDispatch interfaces to access basic Excel functions from a C++ application. Two classes are provided: an Excel Automation class CXLAutomation and a wrapper class CXLEzAutomation. Cloning Hyper-V Virtual Machines the Right Way (Part 2) If you would like to read the other parts in this article series please go to: Introduction In my previous article in this series, I explained that cloning a virtual machine is not quite as intuitive as you might have been lead to believe. We Were Hacked! 8 Tips From A Hacking Victim For Minimizing Your Risk Think you're safe from a cyberattack just because you're a small biz? Think again. Here's how to prevent a hacking.