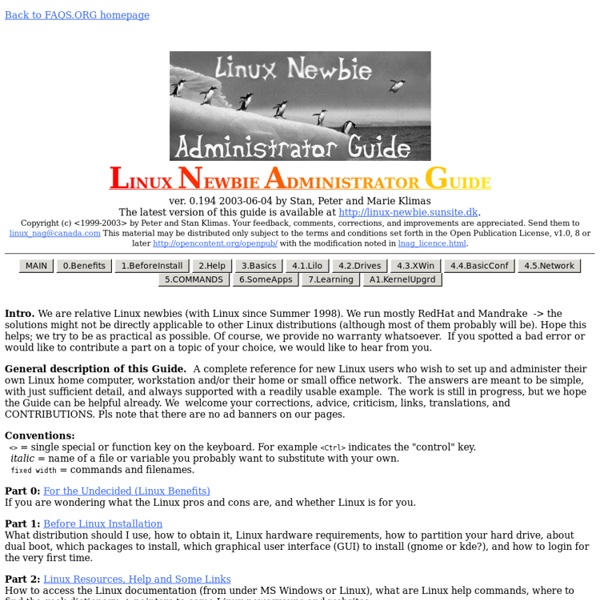 Intro. We are relative Linux newbies (with Linux since Summer 1998). We run mostly RedHat and Mandrake -> the solutions might not be directly applicable to other Linux distributions (although most of them probably will be). General description of this Guide. Conventions: <> = single special or function key on the keyboard. Part 0: For the Undecided (Linux Benefits) If you are wondering what the Linux pros and cons are, and whether Linux is for you. Part 1: Before Linux Installation What distribution should I use, how to obtain it, Linux hardware requirements, how to partition your hard drive, about dual boot, which packages to install, which graphical user interface (GUI) to install (gnome or kde?) Part 2: Linux Resources, Help and Some Links How to access the Linux documentation (from under MS Windows or Linux), what are Linux help commands, where to find the geek dictionary, + pointers to some Linux newsgroups and websites. Licence, Acknowledgments and log of changes.

Learn Linux, 101: The Linux command line Overview This article gives you a brief introduction to some of the major features of the bash shell, and covers the following topics: Interacting with shells and commands using the command lineUsing valid commands and command sequencesDefining, modifying, referencing, and exporting environment variablesAccessing command history and editing facilitiesInvoking commands in the path and outside the pathUsing man (manual) pages to find out about commands This article helps you prepare for Objective 103.1 in Topic 103 of the Junior Level Administration (LPIC-1) exam 101. Back to top The bash shell The bash shell is one of several shells available for Linux. Before we delve deeper into bash, recall that a shell is a program that accepts and executes commands. Shells have some builtin commands, such as cd, break, and exec. Shells also use three standard I/O streams: Input streams provide input to programs, usually from terminal keystrokes. Listing 1. [db2inst1@echidna db2inst1]$ ian@lyrebird:~> $

Linux Learning Zone - Find out everything about Linux here. Linux Newbie Guide: Shortcuts And Commands [an error occurred while processing this directive] Linux Shortcuts and Commands: Linux Newbie Administrator Guideby Stan and Peter Klimas This is a practical selection of the commands we use most often. Legend:<> = single special or function key on the keyboard. Notes for the UNIX Clueless:1. 7.1 Linux essential shortcuts and sanity commands <Ctrl><Alt><F1>Switch to the first text terminal. <Ctrl><Alt><Fn> (n=1..6) Switch to the nth text terminal. ttyPrint the name of the terminal in which you are typing this command. <Ctrl><Alt><F7>Switch to the first GUI terminal (if X-windows is running on this terminal). <Ctrl><Alt><Fn> (n=7..12) Switch to the nth GUI terminal (if a GUI terminal is running on screen n-1). <Tab>(In a text terminal) Autocomplete the command if there is only one option, or else show all the available options. <ArrowUp>Scroll and edit the command history. <Shift><PgUp>Scroll terminal output up. <Shift><PgDown>Scroll terminal output down. exitLogout. . .. lsmod(As root. .

Malicious Linux Commands - From (This article was originally published in Ubuntu Forums but was removed there. Ubuntuguide feels that knowledge about these risks is more important than any misguided attempts to "protect the public" by hiding their potential dangers or protect the (K)Ubuntu/Linux image. The original article has therefore been re-created (and subsequently edited) here.) ATTENTION: It is worthwhile to have some basic awareness about malicious commands in Linux. It is also worthwhile to always enable a Kubuntu screensaver or Ubuntu screensaver with a password so that a casual passerby is not able to maliciously execute one of these commands from your keyboard while you are away from your computer. When in doubt as to the safety of a recommended procedure or command, it is best to verify the command's function from several sources, such as from readily available documentation on Linux commands (e.g. manpages). Here are some common examples of dangerous commands that should raise a red flag. rm -r In Perl

Linux Knowledge Base and Tutorial :: Tutorial Table of Contents Introduction to Operating Systems This section provides an introduction to basic operating system principles from a Linux perspective. We talk about processes, files and directories and the basics of how a user interacts with the system. Linux Basics This section provides an overview of Linux as an operating system and as a product. Working With the System In this section we talk about user interaction with the system, primarily from the command line. Shells and Utilities Here we talk in detail about the traditional way users interact with the system: the shell. Editing Files This section covers four of the most common methods of editing or manipulating files: the vi editor, awk, sed and perl. Basic Administration In this section we talk about the basics of system administration. The Operating System This section is a more detailed description of the Linux operating system. The X Windowing System Here we go into the basics of the X Windowing System. The Computer Itself Networking

Linux Live for CD & USB Seders&#039;s grab bag - Tutorials If you have written anything about sed - whether an introduction, how sed got you out of a real-life situation, or perhaps an advanced technique you've discovered - you may like have your work published here. Your contribution will be very welcome. Intros sed one-liners (18kb) The essential, official compendium of useful sed one-liners. The sed FAQ v15 (168kb) Another sed FAQ And here is another sed FAQ, by a different person. Do it with sed (51kb) By Carlos Jorge G.Duarte. SED - A Non-interactive Text Editor (32kb) By Lee E. Program state in sed (4kb) By Greg Ubben. Introduction to Unix's SED editor By F. Advanced topics Using sed to create a book index (12kb) Eric Pement of Cornerstone magazine shows how he used sed and other utilities to massage an unsorted list of book references into an index. Using lookup tables with s/// (9kb) Part 1 of Greg Ubben's analysis of a complex sed script he wrote to sort, delimit and number an input file containing tabulated data. A lookup-table counter (11kb)

Kernel links Juan-Mariano de Goyeneche < jmseyas@dit.upm.es > /* * The latest version of this document may be found at: * */ The need for a document like this one became apparent in the linux-kernel mailing list as the same questions, asking for pointers to information, appeared again and again. Fortunately, as more and more people get to GNU/Linux, more and more get interested in the Kernel. But reading the sources is not always enough. It is easy to understand the code, but miss the concepts, the philosophy and design decisions behind this code. Unfortunately, not many documents are available for beginners to start. Please, if you know any paper not listed here or write a new document, send me an e-mail , and I'll include a reference to it here. The papers that follow are listed in no particular order. Enjoy! : "Iptables-tutorial" : Oskar Andreasson. : : iptables, netfilter, firewalls. : "The Linux Kernel"