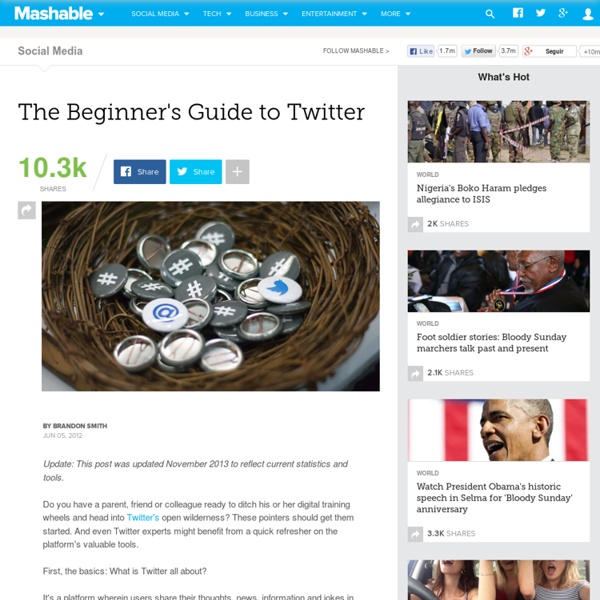 Update: This post was updated November 2013 to reflect current statistics and tools. Do you have a parent, friend or colleague ready to ditch his or her digital training wheels and head into Twitter's open wilderness? These pointers should get them started. And even Twitter experts might benefit from a quick refresher on the platform's valuable tools. First, the basics: What is Twitter all about? It's a platform wherein users share their thoughts, news, information and jokes in 140 characters of text or less. On Twitter, following someone is not necessarily an admission of friendship, but nonetheless affords interaction and conversation — at least in short bursts. The first step is to understand and master the vernacular. Tweet: A 140-character message.Retweet (RT): Re-sharing or giving credit to someone else's tweet.Feed: The stream of tweets you see on your homepage. Twitter has a great online glossary that you can refer back to, should you get mired in a vocab morass. 1. 2. 3. 4. 5. 6.

The Beginner's Guide to the Hashtag If you’re a social media novice, hashtags — those short links preceded by the pound sign (#) — may seem confusing and unnecessary. But they are integral to the way we communicate online, and it’s important to know how to use them (even though some people, like Jimmy Fallon and Justin Timberlake, are not the biggest fans). Plus, they can be a lot of fun. On Twitter, the pound sign (or hash) turns any word or group of words that directly follow it into a searchable link. This allows you to organize content and track discussion topics based on those keywords. The hashtag’s widespread use began with Twitter but has extended to other social media platforms. With our beginner's guide, you'll be hashtagging like a pro in no time. How do you make the most of hashtags? Supported Characters Image: Flickr, Roberta Cortese Which characters can you include in a #hashtag? For starters, spaces are an absolute no-no. Numbers are supported, so tweet about #50ShadesOfGrey to your heart’s content.

Three Simple Ways to Save Time on Twitter What’s your biggest struggle when it comes to social media? I’ve sent that question to hundreds of social media professionals and digital marketers in the past few months and the consensus is… I feel the pain. I know from first-hand experience that juggling a presence on multiple social networks is difficult, especially when you don’t want lose out on the benefits of the newest shiny toys — lately, Google+ and Pinterest. We’re all constantly looking for new tools and methods to increase efficiency without sacrificing quality engagement, which of course should always be our focus with social media. Below are three simple tools and methods to cut down on your tweeting time, especially if you’re on a web page without social sharing buttons. 1. Buffer as a whole is one of my favorite tools, and their browser extension is just icing on the cake. This extension adds a tiny toolbar to the bottom of your browser with a Buffer icon. 2. 3. Let me lay out the general process: Wrong! What Do You Think?

Hashtags considered #harmful The noble hashtag is cursed by a problem Yogi Berra could appreciate: Too many people use it, so no one goes there. Presumably, most Twitter users use hashtags intending to add their tweet to a river of similar information and to expose their own thoughts to a wider, interested audience. Twitter itself markets the hashtag to those ends. But does that actually happen? It’s unlikely, especially for the most popular hashtags. There are many useful exceptions, but hashtags for big news stories are particularly vulnerable to mathematical futility. According to Twitter, #SuperBowl was used 3 million times over about five hours on Super Bowl Sunday this year. Though there were peaks and valleys, 3 million tweets over five hours comes out to an average of 167 tweets per second. Maybe this would be fine if 17 people were performing a search for #SuperBowl every second — then you’d perhaps have one extra reader! It’s not just massive events that have the problem.

Getting started on Twitter? Help is at hand | Social Media 4 Us Getting started on Twitter? Help is at hand If you have just joined Twitter welcome to the Twittersphere! Rest assured that whilst it may seem a bit daunting to start with, once you start to follow people that interest you (this is important) you will start to engage in very interesting conversations. If you prefer you can initially simply follow others who are doing so and this is fine. As you add people you wish to follow, you will see that their tweets provide you with links to websites, photos and videos on topics of interest you share. Twitter follow button You can find more information about using Twitter by going to the Twitter tab at the top of this page or via this link: Everyone has a Twitter name or handle. It is helpful to others when choosing your handle to keep it succinct so it will be easy for your followers to remember. In March 2012 Twitter celebrated it’s 6th birthday. Source:

How does Twitter make money? 6 November 2013Last updated at 19:32 ET By Pia Gadkari BBC News On Thursday, Twitter begins its first day of trading after listing on the New York Stock Exchange, making it the biggest initial public offering (IPO) from a technology company since Facebook went public in May 2012. The giant micro-blogging site, founded just seven years ago, is worth more than $18bn. Days ahead of the flotation, amid heavy investor demand, the micro-blogging firm raised its share price range by 25%, and they were eventually priced at $26 per share. Twitter may have about 232 million monthly users, but the company is not profitable - yet. So, how does Twitter make its money and how can we explain its high valuation? In papers filed with US regulators ahead of the listing, it was revealed for the first time that Twitter made a loss of $69m in the first six months of 2013, on revenues of $254m. Continue reading the main story “Start Quote End QuoteLara O'ReillyMarketing Week 'Native' marketing Using the 'firehose'

Blog | Can Twitter replace traditional professional development? Twitter and Facebook might soon replace traditional professional development for teachers. Instead of enduring hours-long workshops a few times a year, teachers could reach out to peers on the Internet in real time for advice on things like planning a lesson (or salvaging a lesson that’s going wrong), overcoming classroom management problems, or helping students with disabilities. Or, at least, that’s what a group of Internet-savvy educators who convened in New York City this week are hoping. A presenter at the #140edu conference. “Being connected [through social-networking sites] is an opportunity for growth anytime, anywhere,” said Steve Anderson, director of instructional technology for the Winston-Salem/Forsyth County Schools in North Carolina, speaking yesterday at the second annual #140edu conference, a reference to Twitter’s 140 character limit for tweets. “A teacher could be teaching a lesson on the Civil War.

How Many Twitter Accounts Should a Brand Have? We have recently discovered that, in more cases than not, brands are creating multiple Twitter accounts. Indeed, a recent study by our team at Brandwatch found that the number of brands using multiple profiles has increased nine-fold in the last three years, rising from 7% to 63%. What it is about the multiple accounts that makes so many brands feel obliged to create them? is it good for business or does it make it more complex for users? Dell is an American multinational computer business, and owns an astounding 44 different Twitter accounts. The main use of multiple accounts is for different branches of customer service, but it is questionable whether this number of accounts is in fact creating the opposite effect. A concern that we’ve heard raised is that they make the customer service model more complicated and that too many accounts can be hard to make sense of, especially in knowing which one to direct queries or complaints at.

All the easiest ways to search old tweets For people search, see “The Ultimate Guide To Finding People On Twitter“ Twitter’s default search only goes back a week—if that—and often chokes on multiple keyword searches. But finally, Twitter has begun letting users download ALL their Tweets, and has included a tweet search engine (& charts) with the download! It even lets you sort by month or keyword, and includes some handy charts. Well done, Twitter! But not everyone can access their download…yet! So if that’s not available to you, fortunately, there ARE many great alternatives. Problems With Search There is no free search product that is 100% reliable. Also, to see the most tweets possible at Twitter.com, read “How to get Twitter.com to show you more tweets when you page down.” Here are my favorites: Library of Congress tweet archive search By searching Google using the “Updates” option you are searching the entire twitter archive. Review of all search methods I’ve added a brief review below, which I’ll expand later. Snapbird BackTweets

Starbucks extends gifting platform to Twitter Starbucks today launched a new way for customers to gift coffee — the tweet-a-coffee program. U.S. customers can now sync their Starbucks accounts to their Twitter accounts and tweet to @tweetacoffee and the Twitter handle of a gift recipient. They can then send the recipient a $5 digital eGift. The e-gifts are redeemable at participating U.S. According to the company, tweet-a-coffee, which launched today in beta form, will be an ongoing platform that allows customers to engage with one another online to gift a Starbucks beverage "spontaneously and respond proactively with gestures of encouragement, kindness and just because."