Welcome to our new website! - Raspberry Pi. You’ll have noticed something a bit different when you visited Raspberry Pi this morning. 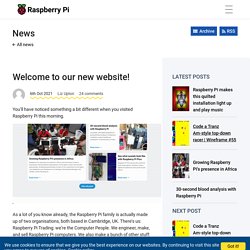 As a lot of you know already, the Raspberry Pi family is actually made up of two organisations, both based in Cambridge, UK. There’s us: Raspberry Pi Trading: we’re the Computer People. We engineer, make, and sell Raspberry Pi computers. We also make a bunch of other stuff: including add-on boards, or HATs; microcontrollers like Raspberry Pi Pico; accessories like keyboards and power supplies; and books and magazines. Then there are our colleagues across the city: the Raspberry Pi Foundation.

Up until now, we have all used a single website, raspberrypi.org, for all our content, whether that content was about our educational work or about Raspberry Pi computers. Raspberry Pi Computers Right now, you’re visiting raspberrypi.com, a completely new website from us, the Computer People, aimed at those of you who want to use or buy a Raspberry Pi or one of our other products. Raspberry Pi: Tutorials, Models, How to Get Started. With more than 34 million units sold, the Raspberry Pi is not only one of the world’s most popular computers; it’s also one of the most important. 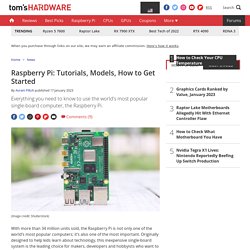 Originally designed to help kids learn about technology, this inexpensive single-board system is the leading choice for makers, developers and hobbyists who want to do everything from building industrial robots to setting up retro arcade machines. Whether you’re eight or 80, if you love technology, the Raspberry Pi is made for you. And with models ranging in price from $4 to $75, anyone can afford to buy one. Here’s what you need to know to make the most of Raspberry Pi. Catalog of 150 open-spec, community-backed Linux SBCs under $200. Our 2021 catalog of 150 open-spec, maker-oriented SBCs that run Linux or Android provides updated prices and descriptions plus a comparison spreadsheet of major features. 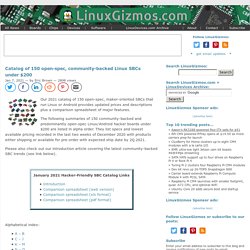 The following summaries of 150 community-backed and predominantly open-spec Linux/Android hacker boards under $200 are listed in alpha order. They list specs and lowest available pricing recorded in the last two weeks of December 2020 with products either shipping or available for pre-order with expected ship date by 2Q 2021. Please also check out our introduction article covering the latest community-backed SBC trends (see link below). Learn Bil Herd’s DIY Surface Mount Assembly Process. You can do your own Surface Mount Technology based PCB assembly with just a handful of tools and some patience. 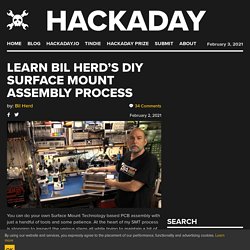 At the heart of my SMT process is stopping to inspect the various steps all while trying to maintain a bit of cleanliness in the process. Surface mount or Surface Mount Technology (SMT) is the modern way to assemble Printed Circuit Boards (PCB) and is what is commonly seen when opening a modern piece of tech. It’s much smaller than the older Through-Hole (TH) technology where the component leads were inserted into holes in PCB, and act we called “stuffing” since we had to stuff the components into the holes.

A few specialized tools make this a lot easier, but resourceful hackers will be able to pull together a solder paste stencil jig, vacuum tweezers, and a modified toaster oven with a controller that can follow the reflow profile of the solder paste. Where you shouldn’t skimp is on the quality, age, and storage of the solder paste itself. Component Size Matters Final Inspection. Mike's Electric Stuff. 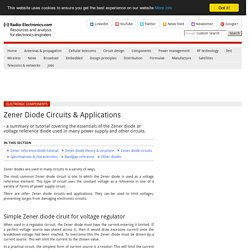 Zener diodes are used in many circuits in a variety of ways. The most common Zener diode circuit is one in which the Zener diode is used as a voltage reference element. This type of circuit uses the constant voltage as a reference in one of a variety of forms of power supply circuit. There are other Zener diode circuits and applications. They can be used to limit voltages, preventing surges from damaging electronics circuits. Simple Zener diode ciruit for voltage regulator When used in a regulator cirrcuit, the Zener diode must have the current entering it limited. NE567. LM567 Tone Decoder Calculator. Hardware. Electronics Forum (Circuits, Projects and Microcontrollers)

General Electronics. Test equip. Micro controller stuff. Lessons In Electric Circuits. A free series of textbooks on the subjects of electricity and electronics Copyright (C) 2000-2015, Tony R. Kuphaldt These books and all related files are published under the terms and conditions of the Design Science License. These terms and conditions allow for free copying, distribution, and/or modification of this document by the general public. A copy of the Design Science License is included at the end of each book volume. As an open and collaboratively developed text, this book is distributed in the hope that it will be useful, but WITHOUT ANY WARRANTY; without even the implied warranty of MERCHANTABILITY or FITNESS FOR A PARTICULAR PURPOSE.

Access individual volumes, I through VI: Edition numbers reflect major structural changes to a book volume such as the addition of new chapters, the substantial expansion of existing chapters, or a change in markup language (source code formatting). "Last revised" dates reflect non-trivial changes only. Note to instructors: Electronics.