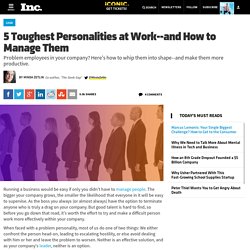 The bigger your company grows, the smaller the likelihood that everyone in it will be easy to supervise. As the boss you always (or almost always) have the option to terminate anyone who is truly a drag on your company. But good talent is hard to find, so before you go down that road, it's worth the effort to try and make a difficult person work more effectively within your company. When faced with a problem personality, most of us do one of two things: We either confront the person head-on, leading to escalating hostility, or else avoid dealing with him or her and leave the problem to worsen.

Neither is an effective solution, and as your company's leader, neither is an option. There's a better way, according to Judith Orloff, M.D., assistant clinical professor of psychiatry at UCLA, and author of "The Ecstasy of Surrender. " THE INFLUENCE OF WORK GROUPS ON THE ANTISOCIAL BEHAVIOR OF EMPLOYEES. How to deal with personality disorders in the workplace. Personality disorder is a condition that must be managed sensitively. 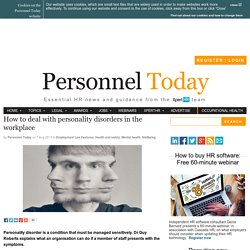 Dr Guy Roberts explains what an organisation can do if a member of staff presents with the symptoms. Personality disorders are recognised conditions that are classified in the International Classification of Diseases (ICD-10) or the US equivalent Diagnostic and Statistical Manual of Mental Disorders (DSM-IV). Both classification systems are valid and share more similarities than differences. The ICD-10 classification of mental and behavioural disorders defines personality disorders as “severe disturbances in the personality and behavioural tendencies of the individual not directly resulting from disease, damage or other insult to the brain or from another psychiatric disorder.

They usually involve several areas of the personality and are nearly always associated with considerable personal distress and social disruption” (Cooper, 1994). It needs to be remembered that “normal” encompasses a rather broad spectrum. How to Manage Employees That Don't Like You. Managing employees dictates a thick skin and an ability to work with an array of personality types. 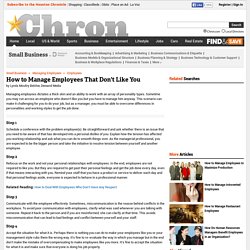 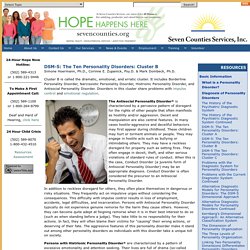 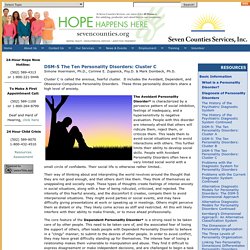 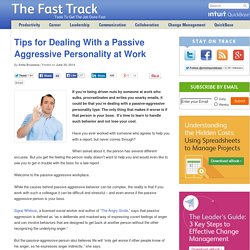 The only thing that makes it worse is if that person is your boss. It’s time to learn to handle such behavior and not lose your cool. Have you ever worked with someone who agrees to help you with a report, but never comes through? When asked about it, the person has several different excuses. But you get the feeling the person really doesn’t want to help you and would even like to see you to get in trouble with the boss for a late report. How to Manage Passive-Aggressive People - MindTools.com. Bringing Hidden Hostility to Light © iStockphotoMhoo1990 Passive aggression is a masked way of expressing feelings of anger. 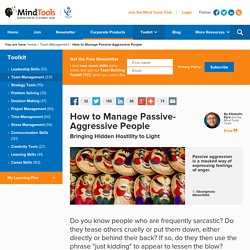 Do you know people who are frequently sarcastic? Do they tease others cruelly or put them down, either directly or behind their back? If so, do they then use the phrase "just kidding" to appear to lessen the blow? Perhaps they respond to conflict by shutting others out and giving them the "silent treatment," rather than addressing issues head on. [Human Resources] Passive Aggressive Behavior: A W - PCT - Pest Control Technology. Can you identify the common warning signals of a destructive employee who is negatively impacting your pest control business? 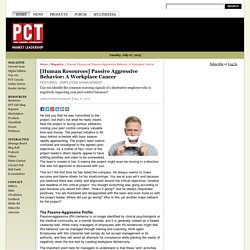 He told you that he was committed to the project, but that’s not what he really meant. Now the project is facing serious setbacks, costing your pest control company valuable time and money. The planned initiative is 60 days behind schedule with busy season rapidly approaching. The project team seems confused and misaligned to the agreed upon objectives. As a matter of fact, most of the project leader’s direct reports appear to have shifting priorities and claim to be overworked. This isn’t the first time he has failed the company. The Passive-Aggressive Profile. Passive-aggressive (PA) behavior is no longer identified by clinical psychologists or the medical community as a mental disorder, and it is generally viewed as a flawed character trait. PAs plan their counteractions covertly, and not with any transparency. The Secrets To Handling Passive-Aggressive People. Passive-Aggressive: What Does It Really Mean? - Emotional Health Center.

The term passive-aggressive is defined as the "unassertive" expression of negative sentiments, feelings of anger, and resentfulness. 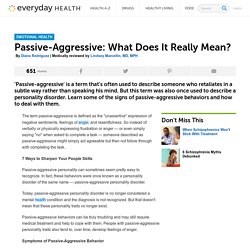 So instead of verbally or physically expressing frustration or anger — or even simply saying "no" when asked to complete a task — someone described as passive-aggressive might simply act agreeable but then not follow through with completing the task. 7 Ways to Sharpen Your People Skills.

Dealing with BPD in an Employee or Coworker - Borderline Personality Disorder. In 2000 a survey of the top Fortune 1000 found that every work day, 723 workers are physically attacked, 43,800 are harassed and 16,400 threatening incidents take place. 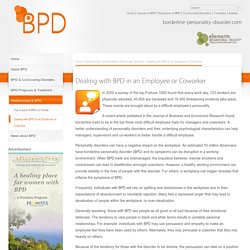