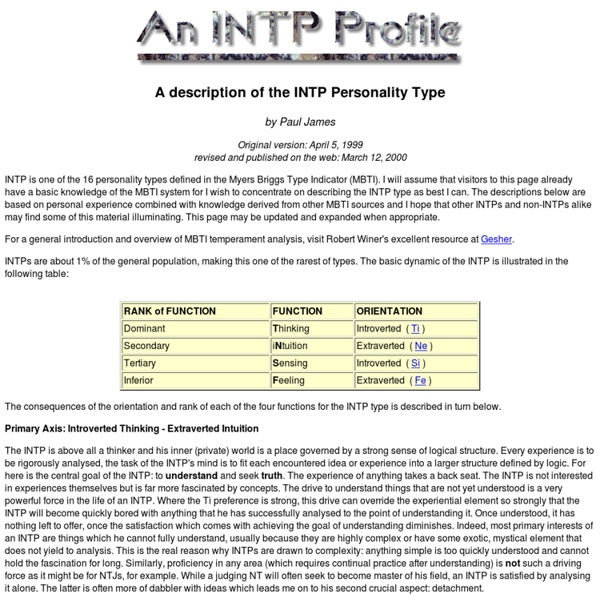 by Paul James Original version: April 5, 1999 revised and published on the web: March 12, 2000 INTP is one of the 16 personality types defined in the Myers Briggs Type Indicator (MBTI). For a general introduction and overview of MBTI temperament analysis, visit Robert Winer's excellent resource at Gesher. INTPs are about 1% of the general population, making this one of the rarest of types. The consequences of the orientation and rank of each of the four functions for the INTP type is described in turn below. Primary Axis: Introverted Thinking - Extraverted Intuition The INTP is above all a thinker and his inner (private) world is a place governed by a strong sense of logical structure. The Ti-Ne axis leads to a curious overriding desire to observe from a detached position, indicating the preference for intuitive perception with respect to external things. Dominant Function: Introverted Thinking While proficiency may not be a central goal, competence always is. Concluding Words

Temperament Website - Portrait of the Rational Inventor (ENTP) Inventors begin building gadgets and mechanisms as young children, and never really stop, though as adults they will turn their inventiveness to many kinds of organizations, social as well as mechanical. There aren't many Inventors, say about two percent of the population, but they have great impact on our everyday lives. With their innovative, entrepreneurial spirit, Inventors are always on the lookout for a better way, always eyeing new projects, new enterprises, new processes. Inventors often have a lively circle of friends and are interested in their ideas and activities. Inventors are usually non-conformists in the workplace, and can succeed in many areas as long as the job does not involve too much humdrum routine. Rational Overview | Architect | Inventor | Fieldmarshal | Mastermind

Dirty Cops, Dirty Games - Page 1 - News - Dallas Last week in Part 1: When Dallas cop Danny Maples turned himself in to police investigators in December 1998, he vowed to tell everything he knew about other dirty cops. But apart from Maples, only one officer, Quentis Roper, was ever charged with a crime. "Danny Maples' jury gave him two years," marvels former Dallas police officer Quentis Roper. "And they felt bad about it. Geez Louise, he had jurors crying for him. There were jurors laughing when they convicted me." It is a Friday afternoon in late May, and Roper is speaking from inside the Dallas County jail. Peter Calvin Quentis Roper, pictured in court, can't believe that investigators took the word of drug dealers, illegal aliens, and prostitutes over one of Dallas' finest. Mark Graham Danny Maples turned himself--and $49,000 cash--in to police investigators. Dallas police Chief Terrell Bolton apparently believed the Dallas County District Attorney's public integrity unit, which investigated Maples and Roper, was racially prejudiced.

INTP - The Wizard INTP - The Wizard Profile by Sandra Krebs Hirsch and Jean Kummerow INTPs are known for their quest for logical purity, which motivates them to examine universal truths and principles. Living As children, INTPs are inwardly focused, often enjoying their won thoughts more than the company of others. INTPs tend to either respect and go along with society's rules, or to question and rebel against them. As young adults choosing careers, INTPs either set a course and work toward it quietly yet forcefully or continue to resist and rebel against society's expectations and irrational rules. Learning and Working The INTP is a relentless learner in areas that hold his or her interest. In school, well-rounded INTPs work on their assignments with a great deal of inward energy and interest that is usually not apparent to others. In taking exams, they prefer theorectical questions. INTPs contribute a logical, system-building approach to their work. Loving Profile by David Keirsey Career Home Midlife Mates

7/20/2016 Thoughts Intuitive-Logical Extratim - ENTp (The Inventor) Intuitive-Logical Extratim - ENTp (The Inventor)Based upon original work by Victor Gulenko with some alterations ENTps normally have a long, slim figure. Other parts of the body are also stretched, especially the legs and fingers. They often have rounded shoulders. Sometimes ENTps have a characteristic inwardly sloping chin. ENTps usually have a distant, far away look in their eyes and it often seems as though they are paying little attention to what is going on. ENTps do not know how to keep the right psychological distance with people. ENTps like to explore everything and are usually completely unaware of how others react to this. ENTps are interested in and talk about everything that is new and unusual even if it is not in their main field of knowledge. The main peculiarity of ENTps behaviour is an incredible absent-mindedness. The other main peculiarity of ENTps behaviour is the ability to mobilise in extreme conditions. .

911 Missing Links From its very inception, the so called 9/11 truth movement, otherwise known as the people who say that George Bush and his cronies did 9/11, has been ultimately led and controlled by the same people that perpetrated the dastardly attacks. Of course after the Mossad/Jews blew up the twin towers and building 7, they allocated their controlled mainstream media the task of pinning all the blame on some rag tag, cave-dwelling, box cutter wielding Arabs known as Al Qaeda (i.e. the toilet). When even the uber brainwashed cattle, known as American citizens, started to have their doubts about this mindless fiction, the Jews panicked and reverted back to their tried and true method of “controlling the dissent”. The Jews launched a massive “9/11 conspiracy theory” campaign, with their operatives positioned firmly at the helm of the movement, ready to shift the blame onto anybody but Israel, Mossad, and the Jews. Alex Jones - Probably the most prominent figure in the so called 9/11 truth movement.

Can 1 miracle plant solve the world's 3 greatest problems? If someone were to tell you that they had a technology — a weed actually — that could sequester huge amounts of carbon permanently while lifting villagers out of poverty by providing both protein-rich food and super-insulated building materials, you might start to wonder if they were, well, smoking a different weed. But it appears that one retired building contractor, Bill Loftus, has actually come upon a brilliant application of the fast-growing, carbon-sucking plant known as Kenaf. Kenaf is in the Hibiscus family and is thus related to both cotton and okra. Originally from Africa, this 4,000-year-old crop was used for its fiber. It has the astonishing ability to grow up to 14 feet in one growing season, yielding 6-10 tons of fiber per acre and making it a great source of pulp for paper. But researchers have also discovered (PDF) a corresponding ability of Kenaf to inhale huge quantities of our most abundant global warming gas — CO2. But its not enough to simply absorb CO2.

How to Choose and Use Financial Software - Personal Finance Hop in your car for a long drive and you probably start glancing at your speed, gas, miles and temperature gauges. Yet during that other long drive known as life, most of us turn a blind eye to our financial gauges—either out of fear or because we aren’t sure what to do about what we see. When installed on your computer, financial software functions like a dashboard for your money, tracking your transactions and giving you early warning when problems arise. Most programs track and display your budget, spending, banking, bills, savings, investments, retirement plans and debt levels—all in one convenient place. The more often you look at these numbers, the richer you’re likely to become. Studies show that people who get into the habit of monitoring their money wind up wealthier than those who don’t. Generally, financial software divides into two broad categories—money-management and tax-preparation programs. Should You Buy It? Money-management programs. Tax-preparation programs.

ENTP - The Innovator ENTP - The Innovator Profile by Sandra Krebs Hirsch and Jean Kummerow ENTPs are known for their quest of the novel and complex. They have faith in their ability to improvise and to overcome any challenges that they face. Living ENTPs are lively children who question established truths and norms, dream and scheme, and develop unusual ways of doing traditional childhood things. ENTP children enjoy inventing new toys, dances, and languages. As young adults, when ENTPs choose a career for themselves, they tend to set flexible goals that allow them to incorporate new information and accommodate to new circumstances when they come along. As adults, ENTPs take advantage of opportunities. Learning and Working ENTPs are relentless learners. ENTPs use their enthusiasm and energy to get others involved in their learning. They like to challenge their teachers and classmates and enjoy competitive learning tasks through which they can show their conceptual versatility. Loving Profile by David Keirsey Home

100+ Years of Gay Couples: Part One 1875-1955 While browsing around I stumbled across some old photos of gay couples and have been able to find a few that go back as far as the 1875(!). This two part post is dedicated to the pioneers of the GLBT community who have made the world a more accepting place today and remind us that homosexuality has been around forever.All pictures have been found at Flickr and gaytwogether.com and are the property of their owners. An adorable couple in love. England, 1875 Unknown location, 1880's During the turn of the century there was a burst of gay activism sparked by the Women's Rights Movement New York, 1900 Unknown early 1900's Somewhere in Europe, 1906 New York, 1907 Unknown, 1912 Rare picture of a WWI couple, no DADT back then. California, 1923 Wonderfully photogenic couple. First gay granted legal rights to adopt children, Hollow Falls, VA late 1920's Couple in Posen, Germany. Berlin, Germany 1930 London, England 1932 Long Island, NY, 1941 Somewhere in America 1943 Somewhere in America, mid 1940's Yes it is

Why I Changed My Name & What It Taught Me About Who I Am If you take a look at my bio here on the Buffer blog, my Twitter account or my website, you’ll see that my name is Belle Beth Cooper. That’s been my name for about eight months. Prior to that it was Corina Mackay. Corina Mary Mackay, in fact, since about ten days after I was born. Changing your name so dramatically isn’t something many of us do, so I thought it would be fun to tell the story of why I changed it, what the process was like and what I learned from it. Why I changed my name Changing my name was a complicated process that took lots of things into account. My old name was hard to spell and say Corina isn’t too unusual a name, but my spelling can be. Anyway, the way we pronounced it was ‘mack-ay’, even though it’s spelled more like ‘mack-eye.’ Needless to say, this got pretty tiring as a kid. I wanted to choose it Choosing a unique name that nobody else in the world has is pretty hard unless you’re willing to go for a word that isn’t even considered a name (yet). New name, new me

Myers-Briggs: You're an INTP! Note: this page is a dead page that is being left online so that all those who may already somehow be linked to it can still find it. However, the new location of the simulated Myers Briggs personality tests has been updated. You're on a quest for logical purity...you're motivated to examine universal truths and principles...always asking "Why?" and "Why not?"...can focus with great intensity on your interests...you appreciate elegance and efficiency in thought processes and demand it in your communication... You might appear low key in appearance and approach, you're hard as nails when challenging a truth...you don't like to deal with the obvious...at your best when developing unusual or complex ideas...you can be an under- achieving but very capable student...if you don't like a rule, you're quick to challenge it and find flaws in it -- this could make you somewhat of a rebel...if you like the rule, though, you have a respect for it and go along with it...