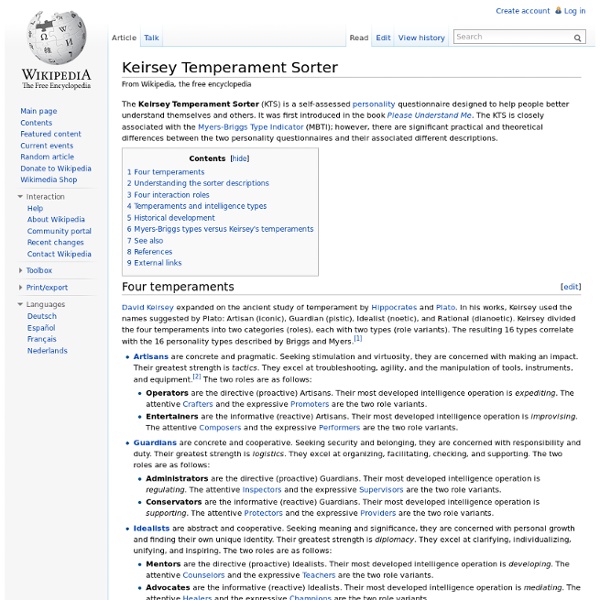 Heading text[edit] The Keirsey Temperament Sorter (KTS) is a self-assessed personality questionnaire designed to help people better understand themselves and others. It was first introduced in the book Please Understand Me. Four temperaments[edit] David Keirsey expanded on the ancient study of temperament by Hippocrates and Plato. Artisans are concrete and adaptable. Guardians are concrete and organized. Idealists are abstract and compassionate. Rationals are abstract and objective. Understanding the sorter descriptions[edit] Although the descriptions of the individual temperaments and role variants were written as a whole, temperament itself can be understood by comparing it to the rings of a tree:[4] The inner ring: abstract versus concrete According to Keirsey, everyone can engage in both observation and introspection. The second ring: cooperative versus pragmatic (utilitarian) This ring, in combination with the inner ring, determines a person's temperament. Four interaction roles[edit]

Creativity tied to mental illness - StumbleUpon Irrelevance can make you mad By William J. Cromie Harvard News Office Ignoring what seems irrelevant to your immediate needs may be good for your mental health but bad for creativity. Focusing on every sight, sound, and thought that enters your mind can drive a person crazy. "Scientists have wondered for a long time why madness and creativity seem linked, particularly in artists, musicians, and writers," notes Shelley Carson, a Harvard psychologist. Carson, Jordan Peterson (now at the University of Toronto), and Daniel Higgins did experiments to find out what these conditions might be. They put 182 Harvard graduate and undergraduate students through a series of tests involving listening to repeated strings of nonsense syllables, hearing background noise, and watching yellow lights on a video screen. The students also filled out questionnaires about their creative achievements on a new type of form developed by Carson, and they took standard intelligence tests. IQ and creativity

MBTI Basics The purpose of the Myers-Briggs Type Indicator® (MBTI®) personality inventory is to make the theory of psychological types described by C. G. Jung understandable and useful in people's lives. The essence of the theory is that much seemingly random variation in the behavior is actually quite orderly and consistent, being due to basic differences in the ways individuals prefer to use their perception and judgment. "Perception involves all the ways of becoming aware of things, people, happenings, or ideas. In developing the Myers-Briggs Type Indicator [instrument], the aim of Isabel Briggs Myers, and her mother, Katharine Briggs, was to make the insights of type theory accessible to individuals and groups. The identification of basic preferences of each of the four dichotomies specified or implicit in Jung's theory. The identification and description of the 16 distinctive personality types that result from the interactions among the preferences."

David Keirsey David West Keirsey (/ˈkɜrziː/; August 31, 1921 - July 30, 2013[1]) was an American psychologist, a professor emeritus at California State University, Fullerton, and the author of several books. In his most popular publications, Please Understand Me (1978, co-authored by Marilyn Bates) and the revised and expanded second volume Please Understand Me II (1998), he laid out a self-assessed personality questionnaire, known as the Keirsey Temperament Sorter, which links human behaviorial patterns to four temperaments and sixteen character types. Both volumes of Please Understand Me contain the questionnaire for type evaluation with detailed portraits and a systematic treatment of descriptions of temperament traits and personality characteristics. Early life, education and professional experience[edit] Development of temperament theories[edit] Keirsey has written extensively about his model of four temperaments (Artisan, Guardian, Idealist, and Rational) and sixteen role variants. Notes[edit]

Myers-Briggs Type Indicator Carl Jung in 1910. Myers and Briggs extrapolated their MBTI theory from Jung's writings in his book Psychological Types A chart with descriptions of each Myers-Briggs personality type and the four dichotomies central to the theory. The Myers-Briggs Type Indicator (MBTI) assessment is a psychometric questionnaire designed to measure psychological preferences in how people perceive the world and make decisions.[1]:1 These preferences were extrapolated from the typological theories proposed by Carl Gustav Jung and first published in his 1921 book Psychological Types (English edition, 1923[2]). Jung theorized that there are four principal psychological functions by which we experience the world: sensation, intuition, feeling, and thinking.[3] One of these four functions is dominant most of the time. Concepts[edit] As the MBTI Manual states, the indicator "is Designed to Implement a theory; therefore the theory must be understood to understand the MBTI".[7]:1 Type[edit] Four dichotomies[edit]

Dmitriy Samohin Tattoo Artist | Ukraine | Ink Army™ | World ink Unity Dmitriy Samohin April 18, 2011 | Posted by admin in Featured Artist - 75 Comments Dmitriy Samohin is from Odesa, Odes’Ka Oblast’, Ukraine. The amount of detail and artistic skill that is put into each piece is truly extraordinary. If you like his work as much as we do, please share below. Check out his Facebook page to see more of his work. Dmitriy Samohin and Robert Hernandez Native Indian portrait by artist Kirby Sattler, Original picture – Red Kite Bird of Prey, The Mountain Lion

Rational temperament Description[edit] As the knowledge-seeking temperament, Rationals trust reason implicitly. They rely on objective observations and factual analysis in any given situation. They seek a logical argument as a basis for action. Interests: Rationals are drawn to science and technology. Self-image: The Rationals' self-esteem is rooted in their ingenuity; their self-respect in their autonomy; and their self-confidence in their resoluteness.[2] Values: Rationals appear calm even in times of turmoil. Social roles: In romantic relationships, Rationals want a mindmate with whom they can discuss the topics that interest them, which are often abstract or theoretical, such as philosophy. Stress[edit] The directive Rationals (Masterminds and Fieldmarshals) experience stress when their long-range vision is resisted or derailed. Traits in common with other temperaments[edit] Keirsey identified the following traits of the Rational temperament:[1] Abstract in communicating (like Idealists) See also[edit]

The 6 Most Incredible Real World Beast Masters Disney movies make hanging out with wild animals look like a walk in a fun, happy, completely predator-free park. But in the real world, being around untamed wildlife isn't so much about carefree singing and dancing and monkeyshinin' as it is about running and screaming. Then coming back later to clean up the poop trail you inevitably left behind. Or it usually is, anyway. #6. To explain this picture of a child cuddling his 20-foot-long snake, we have to tell a story. Fotobank.ruSurprisingly, it didn't end with the kid as poop. Imagine you're the proud parents of a 3-month-old baby. GettyAll that's missing is the colic. So, small. Not Koun Samang's dad, who found a python in his baby's bed and sweetly returned it to the jungle, presumably while giving it a back massage and singing it snaky lullabies. Herald Sun"Hey, what's the worst that could happen?" Seven years later, Samang and the now-giant snake he named "Lucky" are going strong. Herald SunTasting. #5. topdesignmag.com Come on, dude.

Common Careers for Personality Types Research has shown that many of the different Personality Types tend to have distinct preferences in their choice of careers. We have incorporated observations of each type's character traits which affect career choice along with some suggestions for possible directions. We have also included lists of actual careers which the various types have chosen in their lives. This material is provided for your reference, and is intended to be an informational guide.