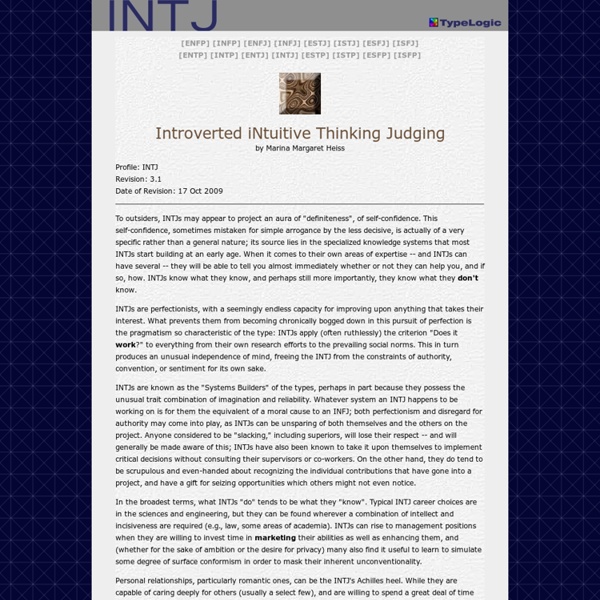 Introverted iNtuitive Thinking Judgingby Marina Margaret Heiss Profile: INTJ Revision: 3.1 Date of Revision: 17 Oct 2009 To outsiders, INTJs may appear to project an aura of "definiteness", of self-confidence. This self-confidence, sometimes mistaken for simple arrogance by the less decisive, is actually of a very specific rather than a general nature; its source lies in the specialized knowledge systems that most INTJs start building at an early age. When it comes to their own areas of expertise -- and INTJs can have several -- they will be able to tell you almost immediately whether or not they can help you, and if so, how. INTJs are perfectionists, with a seemingly endless capacity for improving upon anything that takes their interest. INTJs are known as the "Systems Builders" of the types, perhaps in part because they possess the unusual trait combination of imagination and reliability. In the broadest terms, what INTJs "do" tends to be what they "know". Introverted iNtuition U.S.

MyLifeIsBro Does This NASA Video Show a Spaceship Near Planet Mercury? Here's a simple calculation you can do. It currently takes 216 days to reach mars which is 0.0000059193311 light years away. 216 days = 0.69097222 years (assuming 1 year = 365.25 days for leap years). At this speed it would take 0.69097222/0.0000059193311 * 600 = 7,003,883 or around 7 million years. This assumes we reach the same speeds while carrying enough fuel to last 7 million years, which we can't. A planet that is 600 light-years away will probably NEVER be traveled to without help from something like wormholes, but it's very likely that even if wormholes exist, we couldn't survive traveling through them. Also I would like to add that I've heard from a college physics professor that even if we had the technology to propel something near the speed to light then even collisions with hydrogen atoms (which exist even in interstellar space) would tear apart pretty much anything.

Totally Sidetalkin' Nokia N-Gage Style!! SIDETALKING 2004-2005 What Does Your Body Language Say About You? How To Read Signs and... - StumbleUpon Art by LaetitziaAs we all know, communication is essential in society. Advancements in technology have transformed the way that we correspond with others in the modern world. Because of the constant buzz in our technological world, it's easy to forget how important communicating face-to-face is. When conversing old-school style, it's not only speech we verbalize that matters, but what our nonverbal gestures articulate as well. Body language is truly a language of its own. 10% from what the person actually says40% from the tone and speed of voice50% is from their body language. Lowering one's head can signal a lack of confidence. Pushing back one's shoulders can demonstrate power and courageOpen arms means one is comfortable with being approached and willing to talk/communicate

Time Cube FREE Online Rhyming Dictionary - StumbleUpon ScienceAndReligion.com | Common ground between science and religion 50 Lessons I wish I had learned earlier | Family on Bikes - StumbleUpon Welcome to our blog! Here you'll find bits and pieces of wisdom learned from cycling 17,000 miles from Alaska to Argentina together as a family. Hope it inspires you to live your dream! My book about our journey, Changing Gears, is now released! Read a preview here Now that I’m old and gray (but not quite in my rocker yet!) You’re stronger than you think you are.Mistakes teach you important lessons. What lies before us and behind us are tiny matters when compared to what lies within us.Don’t pray when it rains if you don’t pray when the sun shines.It’s not about getting a chance, it’s about taking a chance.If it were easy everyone would do it.Be vulnerable.A problem is a chance for you to learn.Regardless of the situation, life goes on. If you enjoyed these inspirational quotes and feel they would be beneficial for others, we would appreciate it if you would take a moment to share it with your friends via Twitter, Facebook, Pinterest or email. Interested in our journey?

Special Characters — Alt Keyboard Sequences To type a special character, using an Alt keyboard sequence: Ensure that the Num Lock key has been pressed, to activate the numeric key section of the keyboard. Press the Alt key, and hold it down. There are some gaps in the numerical sequence of Alt character codes, because either those elements do not exist, or they are duplicates of elements listed elsewhere. †Some word processing programs will not recognize these Alt functions. ‡Many fonts improperly display Alt 166 as ª rather than , and Alt 167 as º rather than