25 Great Psychological Thrillers That Are Worth Your Time 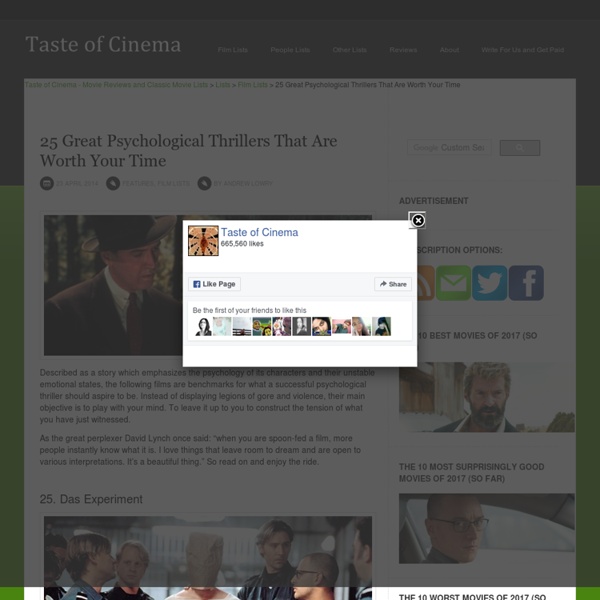 Described as a story which emphasizes the psychology of its characters and their unstable emotional states, the following films are benchmarks for what a successful psychological thriller should aspire to be. Instead of displaying legions of gore and violence, their main objective is to play with your mind. To leave it up to you to construct the tension of what you have just witnessed. As the great perplexer David Lynch once said: “when you are spoon-fed a film, more people instantly know what it is. 25. Das Experiment is a 2001 German thriller from director Oliver Hirschbiegel, starring Moritz Bleibtreu as Tarek Fahd, or later only to be known as Prisoner 77. Tarek reads a newspaper advert regarding a social experiment in a simulated prison. Monitored and observed by scientists, the trial takes a plummet into the dark depths of human behaviour. A gruelling yet compelling watch, what makes Das Experiment even more powerful, is the fact that it is based on actual events. 24. 23. 22. 21.

125 Movies That Absolutely Every Man Should See | FatalDose Compiling a list of the 125 films every man must see was no easy task – personal favourites were discarded, profanity was rampant and it became abundantly clear exactly why nobody likes to see a grown man cry. But we did it – 125 masterful movies that everyone here at Fataldose could live with. The question is, can you? 1. Oldboy (2003) Most infamous for its live octopus-eating scene, in which actor Choi Min-sik actually ate octopi on set (four were used; he said a prayer for each one), Oldboy’s depiction of the effects of solitude on the human psyche are gripping and inspiring in equal measure. Quote: “Your gravest mistake wasn’t failing to find the answer. 2. For many, Inception was the film that underlined Christopher Nolan’s status as one the hottest directors in the business, and for very good reason. Quote: “They say we only use a fraction of our brain’s true potential. 3. Quote: “Old age. 4. Quote: “That son of a bitch took my pants.” 5. 6. Quote: “I have to get back to work. 7. 8.

The 30 Best Films of the Decade We’re all in that humanistic mode of evaluating our lives – coming up on the end of the year and the last time a zero will be the third digit on our calendars. We’re all (from Variety to Cat Fancy) also waxing expert on what films were the best of the best of the best of the past ten years. Which is why there is an unnavigable sea of opinion polluting the internet right now. Neil and I thought, ‘If everyone else is doing it, why can’t we? You may ask (since I’m forcing you to rhetorically), “How can giving your opinion be better than everyone else’s tepid version of an almost-arbitrary-seeming list?” I’m glad you asked. Neil and I anticipated this task back in October and began planning what would become far too much work for two people who essentially sit around watching Animal House all day. The algorithm, which we’ve nicknamed Simon, spat out just over 300 films, reducing our master list by 90%. After 6 cutting sessions and over 4 hours of arguing, we’d chopped the list down to 60.