Everyone waited for it to be taken down. 150 million views later, it's still up. Watch it here. 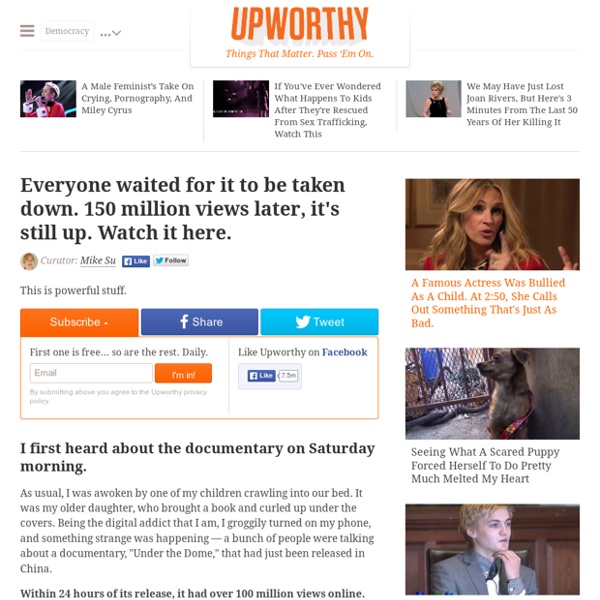 I first heard about the documentary on Saturday morning. As usual, I was awoken by one of my children crawling into our bed. It was my older daughter, who brought a book and curled up under the covers. Being the digital addict that I am, I groggily turned on my phone, and something strange was happening — a bunch of people were talking about a documentary, "Under the Dome," that had just been released in China. Within 24 hours of its release, it had over 100 million views online. Over the weekend, it had over 150 million views. But here's the really crazy thing — it might have just changed the game when it comes to China's relationship with the environment. Everyone in China, from government officials to concerned parents, was watching it. I emailed a friend of mine in China. In a country where government censorship shuts down critical voices, how did former journalist Chai Jing break through to reach over 100 million people? Absolutely heartbreaking. Her unborn daughter already had a tumor. Related:  Photo World view • Chemical and Radioactive Pollution • Urban issues

MIT Researcher’s New Warning: At Today’s Rate, Half Of All U.S. Children Will Be Autistic By 2025 Nick Meyer, althealthworks.com Research scientist Stephanie Seneff of the Massachusetts Institute of Technology (MIT), a widely published author on topics ranging from Azlheimer’s Disease to autism and cardiovascular disease, raised plenty of eyebrows recently with a bold proclamation on autism at a special panel in Massachusetts about genetically modified organisms and other topics. “At today’s rate, by 2025, one in two children will be autistic,” Seneff said last Thursday in Groton, MA at an event sponsored by the holistic-focused Groton Wellness organization. Seneff presented slides showing a remarkably consistent correlation between the rising use of Roundup (with its active ingredient glyphosate) on crops and the rising rates of autism; while it doesn’t show a direct correlation it does give researchers plenty to think about, especially considering Seneff’s research into the side effects of autism that mimic glyphosate toxicity and deficiencies. Dr. Dr. Are you on “Tsu” yet?

Where the walls come alive: Graffiti in Bandra, Mumbai | Talking Cranes Just off bustling Hill Road in Bandra, there are roads that lead you deep into an East Indian village. Paved narrow lanes lined with more than 100-year-old buildings, tightly squashed together in communion, this is a mix of communities and ethnicities all living together and sharing space. Cars, small vans and autos honk their way through keeping you on your toes, but there is a peace about these lanes, a quietness that comes from having been around way longer than you and me. Many houses are making way to aspirations of the multiplying population and are demolished to become ugly 5 storey buildings that jut out like boils, an eyesore on an otherwise smooth skin. But still, there is a difference from the big shops and haggling crowd just 2 minutes away on Hill Road, you enter another world in these lanes, a world from the past that you can still savour, maybe for just a little bit longer. Most appealing is a snack shop that is covered with a tribute or rather an ‘un’tribute to momos!

Incredible Son Goong Cave Vietnam In 1991, a Vietnamese farmer found a cave deep in the jungle. It was named Son Goong, meaning “Mountain River Cave.” Though it was discovered in 1991, it wouldn’t be until 2009 that British experts would explore the cave. What they found there was amazing. Son Doon is situated in the Phon Nha Ke Bang national park, about 280 miles south of Hanoi. Pretty interesting, huh? You’ll Never Guess What Killed $3,000,000 Worth Of Horses At the time, what was wrong with the horses was a complete mystery, but in 2003, something in the horse’s behavior tipped them off. During the winter of 2003/2004, the Justus’s got a lot of snow. They keep a 100 gallon tank of the city’s fluoridated water outside for the horses to drink from, but once the snow came in, the horses virtually shunned the bucket of water. The bucket that was usually refilled every 24-36 hours was staying full for weeks at a time while the horses ate snow to get their water. Interestingly enough, while the horses were eating snow and avoiding the tank of water, their symptoms began to disappear. Cathy explains in an interview that a small ravine runs through their property when the snow is melting. Cathy and Wayne don’t consider it a coincidence that the horses that drank the most water were the ones that got sicker faster than the rest. “Horses on average… will drink 10-12 gallons a day. The speculation here is very much alive. It had been confirmed. Source:

Why we'd be lost without the suburbs | David Shariatmadari Are the suburbs what make Britain great? Should Reginald Perrin have thanked his lucky stars for a middle-management job, cul-de-sac home and peaceful, if monotonous existence? Daniel Finkelstein writes that Sunshine Desserts – the company that drove Perrin to distraction in the late David Nobbs’s sitcom – represents “the height of civilisation”. He says: “The HR department of a children’s shoe brand has never launched a war. And of course he’s right. But it’s not the pinnacle of civilisation, and there’s no reason our quest for fulfilment should end at Acacia Avenue (is that really where Finkelstein himself finds it?) Suburbia might look like a comforting embrace, but there’s a risk of suffocation. It doesn’t have to be kicking the dog, though. “The rain falls hard on a humdrum town. The same is evidently true across the Atlantic – where the white picket fence is an enduring emblem for home sweet home gone bad. Now, it would be easy to dismiss all this as sneering metropolitanism.

Right moment photos 2 clicks Whether taken through careful preparation and calculation or completely by accident, perfectly timed photos are an absolute joy to look at. With the perfect angle or in the perfect split second, you've captured an image that may never happen quite that way ever again. If you've got a perfectly timed pic that you want to share with us, we'd love to see it on this list! Be sure to upvote your favorites as well. Show 82 more Add Image Recent submissions to this list Catnap Do Squirrels Pray? Sunny Arrow In The Sunset Drag Image Select File Rules: 1) no ugly watermarks 2) no borders 3) no low quality images Ooops! 32 Photos That Shows How Bad Pollution Has Become in China With China’s new elite and economic growth of more than 10%, the environment was forced to take a back seat. It’s the most populous country on earth and it is starting to show increased incidences of birth defects and some of the dirtiest air in the world. Its so bad a new word for it has been coined: “Smogpocalypse” With that being said it does not mean that China is not trying to change things. They are the world leaders in investing in low-carbon energy technology. They are also making long-term commitments to fight their problems. The following photographs shows to prove that economic growth comes at a cost, and the long-term effects are still greatly unclear. Thank you to National Geographic, Business Insider, CBS, and all-that-is-interesting for the images above.

Brooklyn Named to List of Top 10 Green Roof Cities | gbNYC Real Estate Group | Commercial Real Estate & Green Buildings in New York City In good news for green building across Kings County, Brooklyn has placed fourth on a recent list of cities ranked by square footage of green roofs. Green Roofs for Healthy Cities (“GRHC”) recently released the results of its 2007 Green Roof Survey, which collects data on the size, composition, and location of green roofs in North America. The survey, which GRHC has been conducting annually since 2004, placed Brooklyn at number 4 on the list of the top 10 green roof cities, with 102,908 square feet of green roofs implemented in 2007. Chicago came in first for the fourth year in a row with 517,633 square feet. GRHC points to Chicago’s policies that support the creation of green roofs, such as F.A.R. bonuses and tax increment financing, as the reason for their repeated superior ranking. 1. about gbNYC gbNYC is a multi-disciplinary consulting and real estate services firm.