Big ups and downs give daytraders a way to thrive. Markets & data. Biography: Surjit S. Bhalla. Just How Wealthy Is the Average American? - Pacific Standard: The Science o. Mean and median are two measures of “average.” 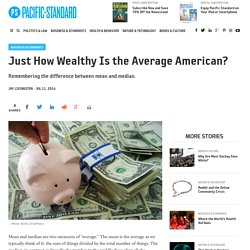 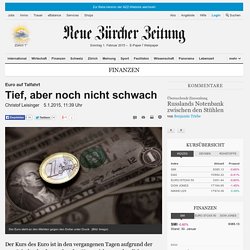 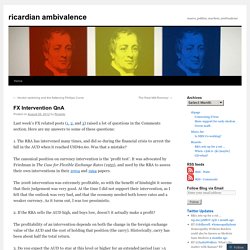 Here are my answers to some of these questions: 1. The RBA has intervened many times, and did so during the financial crisis to arrest the fall in the AUD when it reached USD$0.60. Was that a mistake? Can Debt Spark a Revolution? If Occupy evolves into a debt resistance movement, the results could be explosive. 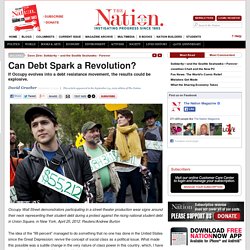 Occupy Wall Street demonstrators participating in a street-theater production wear signs around their neck representing their student debt during a protest against the rising national student debt in Union Square, in New York, April 25, 2012. Reuters/Andrew Burton The idea of the “99 percent” managed to do something that no one has done in the United States since the Great Depression: revive the concept of social class as a political issue. What made this possible was a subtle change in the very nature of class power in this country, which, I have come to realize, has everything to do with debt.

National wealth - Wikipedia, the free encyclopedia. Differences by country[edit] In Taiwan, Gross national wealth and net national wealth are two different measures.In the USA, the figure regularly reported by the Federal Reserve of the US is household net worth, and includes corporations as they are essentially owned by American households. 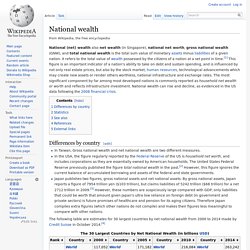 The United States Federal Reserve previously published the figure total national wealth in the past.[2] However, this figure ignores the current balance of accumulated borrowing and assets of the federal and state governments.Japan publishes two figures, gross national assets and net national assets. The American Middle Class Is No Longer the World’s Richest - NYTimes.com. 22.pdf. The strong-dollar policy is a US government policy based on the assumption that a strong exchange rate of the dollar is both in the US national interest and in the interest of the rest of the world. 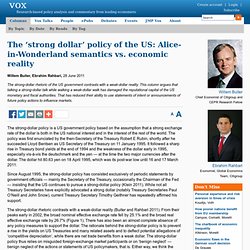 The policy was first enunciated by the then-Secretary of the Treasury Robert E Rubin, shortly after he succeeded Lloyd Bentsen as US Secretary of the Treasury on 11 January 1995. It followed a sharp rise in Treasury bond yields at the end of 1994 and the weakness of the dollar early in 1995, especially vis-à-vis the deutschmark and the yen — at the time the two major currencies after the dollar. The dollar hit 80.63 yen on 18 April 1995, which was its post-war low until 16 and 17 March 2011.

Debt and (not much) deleveraging. Seven years after the bursting of a global credit bubble resulted in the worst financial crisis since the Great Depression, debt continues to grow. 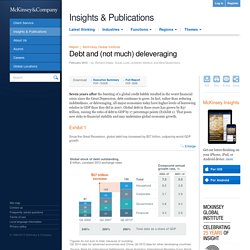 In fact, rather than reducing indebtedness, or deleveraging, all major economies today have higher levels of borrowing relative to GDP than they did in 2007. Global debt in these years has grown by $57 trillion, raising the ratio of debt to GDP by 17 percentage points (Exhibit 1). That poses new risks to financial stability and may undermine global economic growth. Exhibit 1. Nigeria's Central Bank Restricts Currency Trading to Prop Up Naira. Xinhua Insight: China continues promoting RMB use globally in 20. BEIJING, Dec. 25 (Xinhua) -- In 2013, China continued to promote the internationalization of the yuan, or Renminbi, with media and analysts buzzing about the effect of recent reforms on the increasingly global currency. 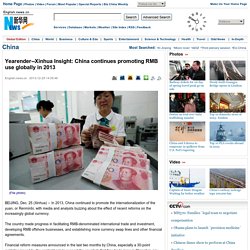 The country made progress in facilitating RMB-denominated international trade and investment, developing RMB offshore businesses, and establishing more currency swap lines and other financial agreements. Currency Fluctuations Will Affect U.S. Trade More Than China’s, BIS Says - Sept. 18 (Bloomberg) -- U.S. trade will be affected more than China’s by fluctuations in real exchange rates as the world’s largest economy has a higher amount of intra-industry transactions, the Bank for International Settlements said. 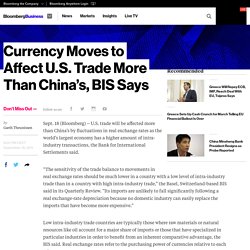 “The sensitivity of the trade balance to movements in real exchange rates should be much lower in a country with a low level of intra-industry trade than in a country with high intra-industry trade,” the Basel, Switzerland-based BIS said in its Quarterly Review. “Its imports are unlikely to fall significantly following a real exchange-rate depreciation because no domestic industry can easily replace the imports that have become more expensive.” Low intra-industry trade countries are typically those where raw materials or natural resources like oil account for a major share of imports or those that have specialized in particular industries in order to benefit from an inherent comparative advantage, the BIS said. 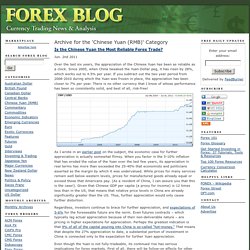 I couldn’t resist, considering that literally all economists and government officials (outside of China, of course) have sounded off on the Chinese Yuan in the last month. Recent additions to this list include President Obama, Chiefs of the IMF and World Bank, President of the Asian Development Bank, US Commerce Secretary Locke and Treasury Secretary Geithner, Nobel Laureate Paul Krugman, ECB Chief Jeane-Claude Trichet, Harvard University Professor Martin Feldstein, Japan’s finance minister…not to mention the thousands of others that didn’t make international news for their denunciation of China’s currency policy.

This rhetoric has also been accompanied by several important developments, including a Presidential visit to China, several meeting of the G20, a summit in Singapore, a slight change in the wording of China’s forex strategy, the release of economic data that suggest China’s economy is strengthening, etc. By Gao ZitanEpoch Times Staff Created: February 4, 2013 Last Updated: February 11, 2013 Two Chinese paramilitary police officers (R) patrol in front of the headquarters of the People's Bank of China in Beijing on Dec. 9, 2011. (Liu Jin/AFP/Getty Images) China’s perceived economic invincibility often rests on the fact that the People’s Bank of China has accumulated $3 trillion in foreign currency reserves: in theory, this massive amount of wealth should insulate China from economic shocks.

Yet many experts at home and abroad believe that the assets could instead be a losing position. China’s Yuan May Draw $1 Trillion on Getting IMF Reserve Status. At least $1 trillion of global reserves will switch into Chinese assets if the International Monetary Fund endorses the yuan as a reserve currency this year, according to Standard Chartered Plc and AXA Investment Managers. People’s Bank of China officials have called for the IMF to include the yuan in its reserve basket -- which consists of the dollar, euro, pound and yen -- in a review later this year. An inclusion could spur as much as 6.2 trillion yuan ($999 billion) of net purchases of China’s onshore bonds by end-2020, Standard Chartered estimates. AXA Investment Managers says about 10 percent of the $11.6 trillion of global reserves will flow into yuan assets.

It didn’t give a timeframe. HKD peg back in focus as SNB removes currency floor. Earlier this week, Hong Kong’s financial secretary John Tsang reinforced the currency board mechanism of the Hong Kong Monetary Authority (HKMA), under which the Hong Kong dollar is pegged between 7.75 and 7.85 to the dollar, in response to a question he was asked during the Asian Financial Forum in Hong Kong.

Tsang pointed out the nature of the two systems were distinct and added "our currency board system is working well and we have no intention or a need … to make any changes at this point". Switzerland and Hong Kong are considered small, open and financially geared economies with stable political systems, with large current-account surpluses and reserves, endowing them with the status of safe haven.

With the backdrop already roiled by a building global financial crisis; US market conditions took a serious turn for the worst after the close on Friday. When it comes down to it, this move was not unexpected. Politics & Policy. Last month, I reported on how anticipation is (was) building towards a revaluation of the Chinese Yuan (RMB), confidently stating that “The only questions are when, how and to what extent.” While I’m not ready to recant that prediction just yet, I may have to temper it somewhat. On the one hand, the case for RMB revaluation is stronger than ever. Among large economies, China’s economy is by far the strongest in the world, clocking in GDP of close to 2009% while most other economies were lucky to “break even.” Meanwhile, its export sector – supporting which is the primary purpose of the RMB peg – is once again robust, having recovered almost completely from a drop-off in demand in 2008 and the first half of 2009.

In fact, exports grew by 30% in January, on a year-over-year basis. Carry Trade Will Not Carry You Away. We should all know by now that forex trading isn’t easy money. Live Forex Quotes. - FXPulse_20130613.pdf. Thoughts on the “Fall of the Euro” two years after publication in 2013. Use Mangaed Forex Trading. Forex Blog. Forex Tutorial: Economic Theories, Models, Feeds & Data. There is a great deal of academic theory revolving around currencies. Microsoft PowerPoint - IEA2011-228 [Sólo lectura] - 228.pdf. Why sterling is overvalued. Economics and markets. GVCs, exchange rates and exports: Swiss evidence. Dario Fauceglia, Andrea Lassmann, Anirudh Shingal, Martin Wermelinger 18 February 2015.

Microsoft PowerPoint - IEA2011-228 [Sólo lectura] - 228.pdf. The Euro Is Not Overvalued (Nor Is Any Other Currency) - Frank Hollenbeck - A common argument for dumping the Euro is that it is overvalued, and that the ECB (European Central Bank) is unwilling to correct this so-called “problem.” This overvaluation is regularly cited as being over 10 percent against the dollar. Playing with and Understanding Purchasing Power Parities. Shortage of USD underestimated; shifting sentiment in favour of US assets w. Generation debt. washingtonpost.com/news/get-there… Policymaker's Guide To Playing The Global Currency Wars. Forex and the Yield Curve: Understanding Interest Rates. Yearly exchange rates by currency, type and methodology - StatBank Denmark.

Soon everybody will be scared about ‘currency war’ again – we should be celebrating. The liquidity monster and FXCM. Recent real effective exchange rate movements (summer 2013 database update) ‎www.treasury.gov/resource-center/international/exchange-rate-policies/Docu. Paul Krugman: Currency Regimes, Capital Flows, and Crises - YouTube. Devaluing to Prosperity: Misaligned Currencies and Their Growth Consequence. The Euro Is Not Overvalued (Nor Is Any Other Currency) - Frank Hollenbeck -