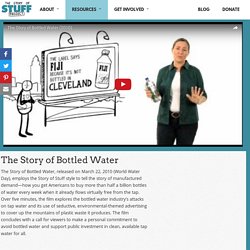 Over five minutes, the film explores the bottled water industry’s attacks on tap water and its use of seductive, environmental-themed advertising to cover up the mountains of plastic waste it produces. The film concludes with a call for viewers to make a personal commitment to avoid bottled water and support public investment in clean, available tap water for all. Credits The Story of Bottled Water was co-created and released by The Story of Stuff Project and a coalition of partners, including Corporate Accountability International, Food & Water Watch, Polaris Institute, Pacific Institute and Environmental Working Group. The movie was produced by Free Range Studios. Movies Archives - The Story of Stuff Project. Shakespeare Solos: watch the first six films. Adrian Lester, Hamlet ‘To be or not to be’ Adrian Lester performs Hamlet’s soliloquy from act III, scene 1, in which the prince reflects on mortality and considers taking his own life. 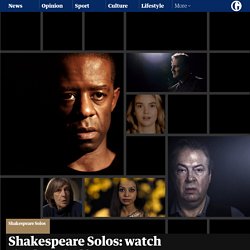 Joanna Vanderham, Romeo and Juliet ‘The mask of night is on my face’ Joanna Vanderham speaks Juliet’s monologue from the balcony scene in which she insists that her devotion to Romeo is true even if it has been a whirlwind romance. Roger Allam, King Lear ‘Blow, winds, and crack your cheeks’ Roger Allam plays Lear in act III, scene 2 of the tragedy. Eileen Atkins, Othello ‘I do think it is their husbands’ faults’ Eileen Atkins speaks Emilia’s lines from Othello, act IV scene 3. Fifty People One Question. Fifty People, One Question: Brooklyn. A Tale of Momentum & Inertia. Sesame Street: House of Bricks (House of Cards Parody) Cannes Lion Award-Winning "Three Little Pigs advert". The Story of Bottled Water - The Story of Stuff Project. Sainsbury's OFFICIAL Christmas 2014 Ad.

Guantánamo Bay: The Hunger Strikes - video animation. One Iranian lawyer's fight to save juveniles from execution - animation. Key & Peele: Dueling Hats. Premier Automne (2013) Orson Welles bitches about Harry Cohn. Yoga - with dogs. It started in the US, when a growing band of health-conscious dog owners wanted a way of combining their favourite exercise with spending quality time with their pets. 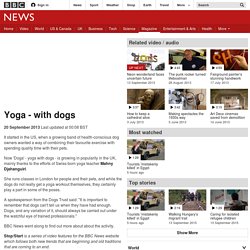 Now 'Doga' - yoga with dogs - is growing in popularity in the UK, mainly thanks to the efforts of Swiss-born yoga teacher Mahny Djahanguiri. She runs classes in London for people and their pets, and while the dogs do not really get a yoga workout themselves, they certainly play a part in some of the poses. A spokesperson from the Dogs Trust said: "It is important to remember that dogs can't tell us when they have had enough. Doga, and any variation of it, should always be carried out under the watchful eye of trained professionals. " BBC News went along to find out more about about the activity. Stop/Start is a series of video features for the BBC News website which follows both new trends that are beginning and old traditions that are coming to an end. Video journalist: Tom Beal. Survivors of Dad Jokes. Script talk short. Talk. Vincent - Tim.Burton.Short.Animation.1982.

The mixed up chameleon YouTube. Boots and Cats YouTube. Tony White ~ "Hokusai - An Animated Sketchbook" Hokusai by Tony White. The Dot and the Line: A Romance in Lower Mathematics. Leonardo DiCAPRIO at Oscar, Climate Change is REAL & Most Urgent THREAT!