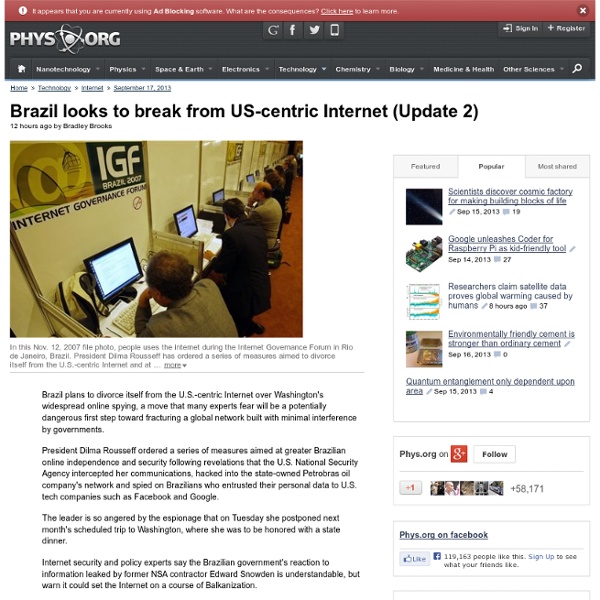 Brazil plans to divorce itself from the U.S.-centric Internet over Washington's widespread online spying, a move that many experts fear will be a potentially dangerous first step toward fracturing a global network built with minimal interference by governments. President Dilma Rousseff ordered a series of measures aimed at greater Brazilian online independence and security following revelations that the U.S. National Security Agency intercepted her communications, hacked into the state-owned Petrobras oil company's network and spied on Brazilians who entrusted their personal data to U.S. tech companies such as Facebook and Google. The leader is so angered by the espionage that on Tuesday she postponed next month's scheduled trip to Washington, where she was to be honored with a state dinner. While Brazil isn't proposing to bar its citizens from U.S. Rousseff says she intends to push for international rules on privacy and security in hardware and software during the U.N.

Facebook Now Knows What You're Buying at Drug Stores In an attempt to give advertisers more information about the effectiveness of ads, Facebook has partnered with Datalogix, a company that "can track whether people who see ads on the social networking site end up buying those products in stores," as The Financial Times's Emily Steel and April Dembosky explain. Advertisers have complained that Facebook doesn't give them any way to see if ads lead to buying. This new partnership is their response. The service will link up the 70 million households worth of purchasing information that Datalogix has with Facebook profiles so they can see if the ads you see changes the stuff you buy and tell advertisers whether their ads are working. Up until now, the social network has been limited to only tracking your Internet life (on and off Facebook.com) with its ubiquitous "like" buttons, but as promised, the future of Facebook is more focused on data, including tracking our offline habits. But finding the link on Facebook requires a lot of digging.

Edward Snowden's E-Mail Provider Defied FBI Demands to Turn Over Crypto Keys, Documents Show | Threat Level Image: Courtesy of the Guardian The U.S. government in July obtained a search warrant demanding that Edward Snowden’s e-mail provider, Lavabit, turn over the private SSL keys that protected all web traffic to the site, according to to newly unsealed documents. The July 16 order came after Texas-based Lavabit refused to circumvent its own security systems to comply with earlier orders intended to monitor a particular Lavabit user’s metadata, defined as “information about each communication sent or received by the account, including the date and time of the communication, the method of communication, and the source and destination of the communication.” The name of the target is redacted from the unsealed records, but the offenses under investigation are listed as violations of the Espionage Act and theft of government property — the exact charges that have been filed against NSA whistleblower Snowden in the same Virginia court. U.S. “Anything done by Mr. “All right,” said Hilton.

Ring Could Log Users In to Houses, Phones and Website as Soon as Next Month The need for more passwords that our feeble human brains struggle to remember can make it feel like we work for the machines instead of the other way around. Wearable, and even embeddable, login storage has emerged has a possible solution. After Google researchers floated the idea of a USB stick or a ring that would generate login keys, it appeared the Web giant would lead the way. But a UK project recently closed a $380,000 Kickstarter campaign, promising delivery of 61,000 password-bearing rings in September. The company, NFC Ring, makes a simple silver ring with two near-field communication transmitters inside it, storing access information that can potentially be used to unlock phones, cars or houses or even to log in to websites. One transmitter faces out and stores information that the user may want to share, such as his or her contact information. Users won’t have to charge or update the rings because the transmitters are passive. Images courtesy NFC Ring

Brazilian president Rousseff: US surveillance a 'breach of international law' | World news Brazil's president, Dilma Rousseff, has launched a blistering attack on US espionage at the UN general assembly, accusing the NSA of violating international law by its indiscriminate collection of personal information of Brazilian citizens and economic espionage targeted on the country's strategic industries. Rousseff's angry speech was a direct challenge to President Barack Obama, who was waiting in the wings to deliver his own address to the UN general assembly, and represented the most serious diplomatic fallout to date from the revelations by former NSA contractor Edward Snowden. Rousseff had already put off a planned visit to Washington in protest at US spying, after NSA documents leaked by Snowden revealed that the US electronic eavesdropping agency had monitored the Brazilian president's phone calls, as well as Brazilian embassies and spied on the state oil corporation, Petrobras. "Personal data of citizens was intercepted indiscriminately.

CA School District Announces It's Doing Round-The-Clock Monitoring Of Its 13,000 Students' Social Media Activities The Glendale School District in California is facing some backlash from the recent news that it has retained the services of Geo Listening to track its students' social media activity. The rationale behind the program is (of course) the students' safety. After collecting information from students' posts on social media platforms such as Facebook, Instagram, YouTube and Twitter, Geo Listening will provide Glendale school officials with a daily report that categorizes posts by their frequency and how they relate to cyber-bullying, harm, hate, despair, substance abuse, vandalism and truancy.Glendale Unified, which piloted the service at Hoover, Glendale and Crescenta Valley high schools last year, will pay the company $40,500 to monitor posts made by about 13,000 middle school and high school students at eight Glendale schools. Glendale Unified Supt. Dick Sheehan said the service gives the district another opportunity to "go above and beyond" when dealing with students' safety."

Snowden Nominated for Freedom of Thought Prize BRUSSELS/MOSCOW, September 11 (RIA Novosti) – Members of the European Parliament are officially nominating fugitive US leaker Edward Snowden for a prize celebrating freedom of thought, a parliamentary representative said Wednesday. Snowden is a candidate for the European Parliament’s Sakharov Prize for Freedom of Thought, named after Soviet scientist and dissident Andrei Sakharov, which honors people or organizations for their work in the defense of human rights and freedom of thought. Christian Engstrom, a member of the Swedish Pirate Party who co-nominated Snowden for the award, wrote that Snowden is “paying a heavy personal price” for his “heroic” effort. “The US government hunts him as an outlaw… Governments that dare to offer him asylum are threatened with dire consequences by the US government,” Engstrom wrote on his personal blog page. “In a painful irony, his only sanctuary is Russia, a country with democratic problems and authoritarian tendencies.”

Yahoo CEO Mayer: we faced jail if we revealed NSA surveillance secrets | Technology Mark Zuckerberg of Facebook and Marissa Mayer, the CEO of Yahoo, struck back on Wednesday at critics who have charged tech companies with doing too little to fight off NSA surveillance. Mayer said executives faced jail if they revealed government secrets. Yahoo and Facebook, along with other tech firms, are pushing for the right to be allowed to publish the number of requests they receive from the spy agency. Companies are forbidden by law to disclose how much data they provide. During an interview at the Techcrunch Disrupt conference in San Francisco, Mayer was asked why tech companies had not simply decided to tell the public more about what the US surveillance industry was up to. Mayer said she was "proud to be part of an organisation that from the beginning, in 2007, has been sceptical of – and has been scrutinizing – those requests [from the NSA]." Zuckerberg said the government had done a "bad job" of balancing people's privacy and its duty to protect.

Protests follow Google 'endorsed advert' change 14 October 2013Last updated at 06:35 ET The change might mean comments made on Google turn up on adverts Google is facing a backlash over plans to put people's faces and comments about products and places into adverts. The "shared endorsements" policy change starts on 11 November and covers the comments, "follows" and other actions people do on Google+. One protest involves people swapping their profile pictures for that of Google boss Eric Schmidt so his image rather than their own appears on ads. Google said it had made it easy for people to opt out of the system. The search giant started alerting people about the upcoming policy change via banners on its main webpage and in a page explaining the change to its "policies and principles". Google also gave examples of how the "shared endorsement" system might work. Many people protested about the change to Google, and some altered their image profiles on the Google+ social network in response.

How Defenders Of NSA Dragnet Surveillance Are Stretching A 1979 Ruling To Pretend It's Constitutional Defenders of the legality of the NSA's dragnet approach to surveillance often point to the concept of the third party doctrine, and specifically to the case Smith v. Maryland, in which the Supreme Court said that it was okay for law enforcement to get phone records without a warrant because the information was held by a "third party" and the original caller had no expectation of privacy in data given to that third party. We've questioned the legitimacy of the third party doctrine for years, and folks like Al Gore and Alan Grayson have discussed why it's a stretch to say that the ruling applies to the NSA hoovering up all phone call data. Jim Harper, who has spent more time than anyone I know thinking about the third party doctrine over the years, has a good post explaining some of the history and why it's a huge stretch to say that Smith v. In other words, the facts of the NSA dragnet are extremely different than the facts in Smith v.