I'm Being Followed: How Google—and 104 Other Companies—Are Tracking Me on the Web - Alexis C. Madrigal 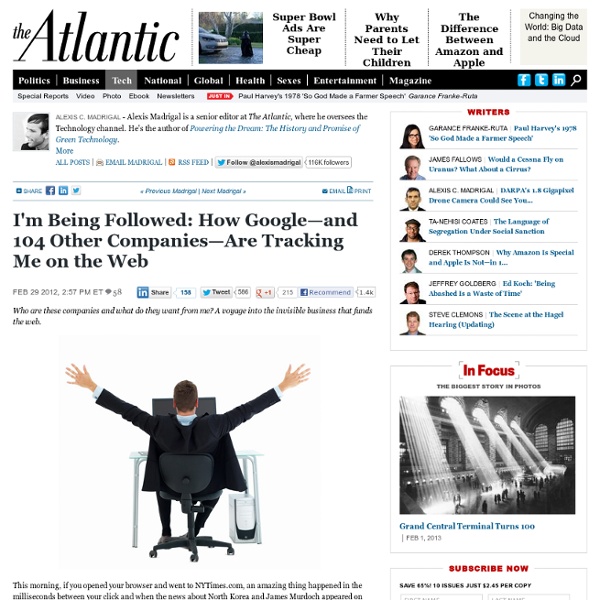 Who are these companies and what do they want from me? A voyage into the invisible business that funds the web. This morning, if you opened your browser and went to NYTimes.com, an amazing thing happened in the milliseconds between your click and when the news about North Korea and James Murdoch appeared on your screen. Data from this single visit was sent to 10 different companies, including Microsoft and Google subsidiaries, a gaggle of traffic-logging sites, and other, smaller ad firms. There's nothing necessarily sinister about this subterranean data exchange: this is, after all, the advertising ecosystem that supports free online content. Even if you're generally familiar with the idea of data collection for targeted advertising, the number and variety of these data collectors will probably astonish you. And that's just the As. To be clear, these companies gather data without attaching it to your name; they use that data to show you ads you're statistically more likely to click. Related:  Control

Snowden Uncovers Shocking Truth Behind Chemtrails Share This Article With Others Edward Snowden, the hacker who gained access to every secret corner of the Internet during his tenure at the NSA, has come forward with details of a classified project to alter the world’s climate. The shocking truth, as he says, is that chemtrails are part of a benevolent program aimed at countering global warming. By cooperating in secret with jet fuel manufacturers, government agents have carefully kept the massive chemtrail efforts completely under wraps. Snowden added, “I am only revealing this program because there is no oversight in the scientific community, no public discussion, and little concern for the side-effects which are well known only to a few privileged people interested in continuing the decades-long chemtrail program in secret.” According to Snowden, chemtrails are the only thing keeping the US from global warming incineration, but at what price? Source: www.chronicle.su Eddie (1897 Posts) Eddie L. is the founder and owner of WorldTruth.TV.

One Per Cent: Anonymous members tricked into giving up bank details Jacob Aron, technology reporter (Image: Isopix/Rex Features) Members of Anonymous regularly band together to take down websites owned by those they don't like, but security firm Symantec reports that a recent attack could actually have backfired, putting amateur hacktavists' bank accounts at risk. Anonymous uses tools such as the Low Orbit Ion Cannon or Slowloris to perform distributed denial-of-service (DDoS) attacks against its targets, with sympathetic Anons downloading the software to become part of a voluntary botnet. In January the group decided to hit the websites of the US Department of Justice and various media companies in response to the takedown of file storage site Megaupload, providing a guide on Pastebin for those who wished to take part in the attacks. Computers infected with the malware still took part in the Anonymous DDoS attacks, but were also secretly sending online bank account and webmail logins back to the attacker.

Consumers Are Ready To Manage Their Own Data - Fatemeh Khatibloo by Fatemeh Khatibloo | 9:09 AM October 6, 2011 Facebook’s rollout of its new Timeline interface made plenty of waves both in the media and across the Facebook user base. But I’m most fascinated by how Timeline plugs in to Facebook Connect to create a new class of empowered consumers who are willing to share their personal data with marketers in exchange for convenience, a personalized experience, and value. Imagine this: I’m in the market for a new car, and I know a friend recently purchased a Subaru she’s enamored of. Now I’m ready to make a purchase, and I’ve shared my interest with a couple of different dealerships. Soon, a number of relevant offers come in, and I make my decision. We’re closer to this reality than most people imagine. Operationally, PIDM is comprised of two components: personal data lockers (PDLs) and authorization managers (AMs). Strategically, businesses will need to embrace five key concepts if they want to engage with consumers in a meaningful way.

Walnuts Are Drugs, Says FDA Diamond’s transgression was to make “financial investments to educate the public and supply them with walnuts,” as William Faloon of Life Extension magazine put it. On its website and packaging, the company stated that the omega-3 fatty acids found in walnuts have been shown to have certain health benefits, including reduced risk of heart disease and some types of cancer. These claims, Faloon notes, are well supported by scientific research: “Life Extension has published 57 articles that describe the health benefits of walnuts”; and “The US National Library of Medicine database contains no fewer than 35 peer-reviewed published papers supporting a claim that ingesting walnuts improves vascular health and may reduce heart attack risk.” This evidence was apparently not good enough for the FDA, which told Diamond that its walnuts were “misbranded” because the “product bears health claims that are not authorized by the FDA.” Faloon thinks he knows why this is the case.

Think Again: Cyberwar -- By Thomas Rid "Cyberwar Is Already Upon Us." No way. "Cyberwar is coming!" John Arquilla and David Ronfeldt predicted in a celebrated Rand paper back in 1993. Since then, it seems to have arrived -- at least by the account of the U.S. military establishment, which is busy competing over who should get what share of the fight. Cyberspace is "a domain in which the Air Force flies and fights," Air Force Secretary Michael Wynne claimed in 2006. Time for a reality check: Cyberwar is still more hype than hazard. Take the dubious story of a Soviet pipeline explosion back in 1982, much cited by cyberwar's true believers as the most destructive cyberattack ever. But did it really happen? Most other commonly cited cases of cyberwar are even less remarkable. Despite his analogies, the attack was no act of war. Indeed, there is no known cyberattack that has caused the loss of human life. Illustration by Francesco Bongiorni for FP "A Digital Pearl Harbor Is Only a Matter of Time." Keep waiting. Just the opposite.

The Conspiracy Theory Is True: Agents Infiltrate Websites Intending To "Manipulate, Deceive, And Destroy Reputations" Republished from zerohedge.com By Tyler Durden In the annals of internet conspiracy theories, none is more pervasive than the one speculating paid government plants infiltrate websites, social network sites, and comment sections with an intent to sow discord, troll, and generally manipulate, deceive and destroy reputations. Guess what: it was all true. And this time we have a pretty slideshow of formerly confidential data prepared by the UK NSA equivalent, the GCHQ, to confirm it, and Edward Snowden to thank for disclosing it. Greenwald's latest revelation focuses on GCHQ’s previously secret unit, the JTRIG (Joint Threat Research Intelligence Group). Among the core self-identified purposes of JTRIG are two tactics: (1) to inject all sorts of false material onto the internet in order to destroy the reputation of its targets; and (2) to use social sciences and other techniques to manipulate online discourse and activism to generate outcomes it considers desirable. The Art of Deception

Culture Desk: How to Get Privacy Right Here’s a news cycle to get used to: a story breaks about a big technology company doing something that sounds like an invasion of privacy; then there’s outrage, and either an apology or a denial. Sometimes a class-action suit follows. Then everything gets forgotten until another week or two passes, and the cycle renews. Privacy snafus are to social networks as violence is to football. The whole point of social networks is to share stuff about people that’s interesting, just as the whole point of football is to upend the guy with the ball. Every so often, someone gets paralyzed, which prompts us to add padding to the helmets or set new rules about tackling. In mid-February, the social network Path was called out for pulling entire address books off users’ iPhones without permission. The cycle repeats, and the privacy invasions continue, because data is the new currency of the Internet. Data is also becoming ubiquitous just as privacy becomes elusive. So, what should we do?

“I Was Literally Surrounded By Them When I Was 14″ – Corey Feldman Exposes Hollywood Pedophilia For those who haven’t already heard, Corey Feldman (arguably the biggest child actor of the 80’s) went public about being sexually abused by Hollywood moguls, multiple times. He describes how he and fellow former child star Corey Haim were constantly fed drugs and taken advantage of. Feldman started speaking out after the death of his friend. He says that the trauma Haim experienced as a child played a large role in his death. This isn’t the first time an actor or actress has come out, Allison Arngrim, the former “Little House on the Prairie” star also wrote about her own experiences in the book “Confessions of a Prairie Bitch,” where she also expresses how she was abused multiple times. Sex abuse charges have been laid multiple times against Hollywood employees. On a personal note, based on everything I have looked at over the years I have no doubt in my mind that Hollywood is filled with pedophiles and occultists. Related CE Articles: Roseane Barr “MK Ultra Rules in Hollywood” Sources:

We, the Web Kids - Alexis Madrigal - Technology Piotr Czerski is a Polish writer and commentator. Here, he lays out the kind of political/literary manifesto that seems to pop up from time to time, usually in Europe. The essay, as translated by Marta Szreder, was posted to Pastebin under a Creative Commons license. I repost it here with the first several paragraphs excised, so that we can hasten to the meat of Czerski's analysis about how the expectations of young people have been conditioned by their experiences of the Internet. 1. We grew up with the Internet and on the Internet. Brought up on the Web we think differently. To us, the Web is a sort of shared external memory. 2. This does not mean that we demand that all products of culture be available to us without charge, although when we create something, we usually just give it back for circulation. One more thing: we do not want to pay for our memories. 3. What we value the most is freedom: freedom of speech, freedom of access to information and to culture.