Revealed: how US and UK spy agencies defeat internet privacy and security 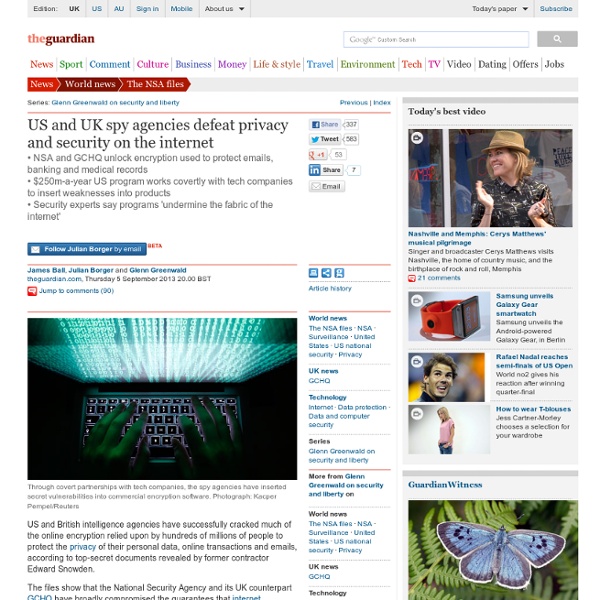 US and British intelligence agencies have successfully cracked much of the online encryption relied upon by hundreds of millions of people to protect the privacy of their personal data, online transactions and emails, according to top-secret documents revealed by former contractor Edward Snowden. The files show that the National Security Agency and its UK counterpart GCHQ have broadly compromised the guarantees that internet companies have given consumers to reassure them that their communications, online banking and medical records would be indecipherable to criminals or governments. The agencies, the documents reveal, have adopted a battery of methods in their systematic and ongoing assault on what they see as one of the biggest threats to their ability to access huge swathes of internet traffic – "the use of ubiquitous encryption across the internet". But security experts accused them of attacking the internet itself and the privacy of all users.

Edward Snowden: the whistleblower behind the NSA surveillance revelations The individual responsible for one of the most significant leaks in US political history is Edward Snowden, a 29-year-old former technical assistant for the CIA and current employee of the defence contractor Booz Allen Hamilton. Snowden has been working at the National Security Agency for the last four years as an employee of various outside contractors, including Booz Allen and Dell. The Guardian, after several days of interviews, is revealing his identity at his request. From the moment he decided to disclose numerous top-secret documents to the public, he was determined not to opt for the protection of anonymity. "I have no intention of hiding who I am because I know I have done nothing wrong," he said. Snowden will go down in history as one of America's most consequential whistleblowers, alongside Daniel Ellsberg and Bradley Manning.

Jared Cohen, 'The New Digital Age' Co-Author, Discusses The Future Of The Internet Jared Cohen has been traveling to the Middle East and Africa since he was a child, first to satisfy his "addiction" to travel, and later, as adviser to former Secretaries of State Condoleezza Rice and Hillary Clinton, to study how technology impacts those areas. In 2010, he joined Google and is now the director of Google Ideas, a think tank dedicated to confronting global problems with technology. Cohen was recently named to Time magazine's annual list of "100 Most Influential People In The World," just in time for the release of his new book, which he co-authored with Eric Schmidt, Google's executive chairman. The New Digital Age: Reshaping the Future of People, Nations and Business, which hits shelves on Tuesday, discusses how billions of people connecting to the Internet will affect global politics, society and the economy. Where do you and Eric Schmidt stand on the future of online privacy? Even for kids?

Alleged subway 'Peeping Mike' appeals before Massachusetts SJC BOSTON — The lawyer for an Andover man argued before the state Supreme Judicial Court yesterday that women “can not expect privacy” in a subway from people like her client who is accused of using his cellphone camera to snap “up-skirt” pictures of female passengers. “If a clothed person reveals a body part whether it was intentional or unintentional, he or she can not expect privacy,” Attorney Michelle Menken told the seven justices on behalf of her client, Michael Robertson, 31. Robertson was arrested in August 2010 for allegedly trying to take photos up women’s dresses on Boston’s Green Line subway. Robertson’s trial in Boston Municipal Court has been stayed pending the appeal before the state’s highest court. He was not in the courtroom yesterday for the arguments.

Muzzling Science: How Tories Control The Message The Harper government’s iron grip on communications has been acutely felt in federal agencies and departments that engage in scientific research, resulting in a dramatic drop in press releases, the muzzling of scientists, and, in one department at least, a process that flags “negative” interview requests from news media, often leaving them unanswered or denied, internal documents show. Since the Tories formed government in 2006, the clampdown and centralization of communications by the Privy Council Office (PCO) – the bureaucratic arm that serves the Prime Minister’s Office – has been well documented, from directives to use the term “Harper Government” on official Government of Canada communications to tightly stage-managed press conferences. But documents obtained under the Access to Information Act reveal just how politically charged government communications have become at the departmental level, especially when it involves federal scientists. Related on HuffPost:

Russia Will Not Hand Snowden Over to US – Putin MOSCOW, September 4 (RIA Novosti) – The United States “is possibly right” to seek the extradition of whistleblower Edward Snowden from Russia, but Moscow will not hand him over, Russian President Vladimir Putin said in an interview broadcast Wednesday. “The problem is not that we’re defending Snowden. We’re not. The problem is that we don’t have a mutual extradition treaty with the United States,” Putin said in an interview according to a transcript of his interview with The Associated Press and Russia’s Channel One television. America on NSA Spy Programs: Meh According to some, the recently revealed NSA spy programs represent an existential threat to the Constitution, freedom, and the American way of life. But the country at large is kind of meh about the whole thing. According to a new Pew poll, the first to gauge the public's response to the controversial programs, a comfortable majority of the American sheeple — 56 percent to 41 percent — supports the gathering of millions of phone records in the quest to fight terrorism.

Video: Collecting Rainwater Now Illegal in Many States Many of the freedoms we enjoy here in the U.S. are quickly eroding as the nation transforms from the land of the free into the land of the enslaved, but what I’m about to share with you takes the assault on our freedoms to a whole new level. You may not be aware of this, but many Western states, including Utah, Washington and Colorado, have long outlawed individuals from collecting rainwater on their own properties because, according to officials, that rain belongs to someone else. Check out this news report out of Salt Lake City, Utah, about the issue. It’s illegal in Utah to divert rainwater without a valid water right, and Mark Miller of Mark Miller Toyota, found this out the hard way. After constructing a large rainwater collection system at his new dealership to use for washing new cars, Miller found out that the project was actually an “unlawful diversion of rainwater.”

NSA surveillance: how to stay secure Now that we have enough details about how the NSA eavesdrops on the internet, including today's disclosures of the NSA's deliberate weakening of cryptographic systems, we can finally start to figure out how to protect ourselves. For the past two weeks, I have been working with the Guardian on NSA stories, and have read hundreds of top-secret NSA documents provided by whistleblower Edward Snowden. I wasn't part of today's story – it was in process well before I showed up – but everything I read confirms what the Guardian is reporting.

No Warrant, No Problem: How the Government Can Get Your Digital Data Update, Jan. 8, 2014: This post has been updated. It was originally published on Dec. 4, 2012. The government isn't allowed to wiretap American citizens without a warrant from a judge. But there are plenty of legal ways for law enforcement, from the local sheriff to the FBI to the Internal Revenue Service, to snoop on the digital trails you create every day.

Nestle CEO: Water Is Not A Human Right, Should Be Privatized Is water a free and basic human right, or should all the water on the planet belong to major corporations and be treated as a product? Should the poor who cannot afford to pay these said corporations suffer from starvation due to their lack of financial wealth? According to the former CEO and now Chairman of the largest food product manufacturer in the world, corporations should own every drop of water on the planet — and you’re not getting any unless you pay up.