What Your Klout Score Really Means 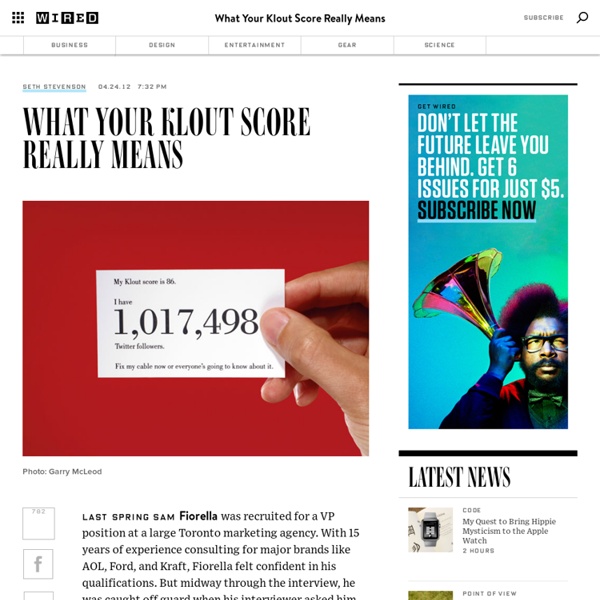 Last spring Sam Fiorella was recruited for a VP position at a large Toronto marketing agency. With 15 years of experience consulting for major brands like AOL, Ford, and Kraft, Fiorella felt confident in his qualifications. But midway through the interview, he was caught off guard when his interviewer asked him for his Klout score. Fiorella hesitated awkwardly before confessing that he had no idea what a Klout score was. The interviewer pulled up the web page for Klout.com—a service that purports to measure users’ online influence on a scale from 1 to 100—and angled the monitor so that Fiorella could see the humbling result for himself: His score was 34. “He cut the interview short pretty soon after that,” Fiorella says. Partly intrigued, partly scared, Fiorella spent the next six months working feverishly to boost his Klout score, eventually hitting 72. But even if you have no idea what your Klout score is, there’s a chance that it’s already affecting your life. Go Back to Top. Related:  Social Networks

Most Facebook Users Have Taken a Break From the Site, Survey Finds Stoyan Nenov/ReutersOnly 12 percent of Facebook users said the site had become more important to them over the last year. Facebook is the most popular social network in America — roughly two-thirds of adults in the country use it on a regular basis. But that doesn’t mean they don’t get sick of it. A new survey by the Pew Research Center‘s Internet and American Life Project, conducted in December, found that 61 percent of current Facebook users admitted that they had voluntarily taken breaks from the site, for as many as several weeks at a time. The main reasons for their social media sabbaticals were not having enough time to dedicate to pruning their profiles, an overall decrease in their interest in the site, and the general sentiment that Facebook was a major waste of time. About 4 percent cited privacy and security concerns as contributing to their departure. “These data show that people are trying to make new calibrations in their life to accommodate new social tools,” said Mr.

Score On the Leakiness of Surveillance Culture, the Corporate Gaze, and What That Has To Do With the New Aesthetic When David Rowe put a smart meter in his home, it wasn’t so that he could spy on Amy, his teenage daughter. But that’s what happened anyway. 800KM from home, with the same idle curiosity that has me popping open my Twitter feed when there’s a lull in activity, he decided to check on his Fluksometer. photo credit: Sam Breach It’s a cute story, but it illustrates a crucial point: surveillance culture is leaky. So far, I’ve been telling you the story about this kind of surveillance that companies who market these services want you to hear. From here, we get the fantasy that with the right mixture of surveillance and analysis, you too can make terrifyingly accurate predictions about your customer’s/children’s/terrorism suspect’s behaviour. photo credit: pgegreenenergy The truth is illustrated by an infographic halfway through Wired’s scathing overview of Klout. Any sane marketing organization would look at these results and conclude that Klout’s metrics are utterly flawed. Got here.

Guy Kawasaki Explains How Entrepreneurs Are Getting Social Media All Wrong Klout and Why the Design of Social Networking Matters Social media has a fraught relationship with neurosis. Obsessive people are essential to sites like Facebook and Twitter. They add energy and buzz. Their identities get tied up with their avatars, and that in itself makes the sites seem important. Social media also has a fraught relationship with competition. Each site deals with these problems differently. The newest social media tool to grapple with this is Klout, a service for measuring your influence on all of these social networks. Klout grades users on a scale of one to a hundred based on some proprietary algorithm that counts how often your comments are retweeted, liked, or shared. The idea is very clever, and very timely. The numbers are also obviously important to employers, marketers, and socialites. But clever ideas are not necessarily good ones, and Klout is designed in a way that makes it likely to fuel both unhealthy obsession and unhappy competition. The structure of social networks subtly changes the way we act.

Retailers Track Consumers With Facial Recognition Technology As They Shop Time to go shopping in a ski mask? Fashion retailers and others are unleashing surveillance systems equipped with NeoFace, a face detection and comparison engine, allowing them to track customers’ visits, behaviors, and characteristics, thus building a record of where you have been, and presumably the ability to predict your actions: 0Share 2Share consumer culture, Data, Facial Recognition, Futurism, Information, Privacy, retail stores, shopping, Surveillance, Technology, Video Why Big Corporations Are Putting the Brakes on Social Media | Blog | Daily Dose When it comes to the care and tending of corporate blogs, Twitter accounts and Facebook pages, a new study suggests big business social media may be suffering from neglect. In recent report by the Center for Marketing Research at the University of Massachusetts Dartmouth social media use among America's largest companies is losing steam. Specifically, less than a quarter of the nation's top 500 companies as ranked by Fortune magazine now have a public-facing blog -- the same percentage reported in last year's study. When UMass Dartmouth began counting blogs within the Fortune 500 in 2008, that figure was 16 percent, growing to 22 percent in 2009. The use of Twitter and Facebook among Fortune 500 companies was similarly stunted. This year, 62 percent of those corporations took advantage of the Twittersphere, up just 2 percentage points over 2010. Why do you think smaller companies use social media more than bigger firms?

Klout and PeerIndex Don’t Measure Influence. Brian Solis Explains What They Actually Do Whether you like it not, Klout, Kred, PeerIndex, and Radian6 are measuring your social capital — not your influence but your potential for it. Altimeter Group’s principal analyst Brian Solis today releases a free report that explains why influence is largely misunderstood, and breaks down what 14 of the top measurement services are really good for. It eradicates consumer myths about one of social media’s hottest trends, and gives brands an action plan for making money with these tools. You can see and download “The Rise Of Digital Influence” report on Slideshare, or check it out here along with my key takeaways and analysis of why these products are flawed now but have big potential. For the world’s social media users: accept that you’re already being indexed by these services, and they’re going to sell data about you. For brands: You too need to start by outlining specific goals for how you’ll identify influencers and what you want them to accomplish for you.

Exclusive Excerpt From Jonah Berger's Disruptive New Book "Contagious" (Please Don't Tell) In Fast Company’s April issue, we’ll profile Jonah Berger, the 32-year-old Wharton professor who has become one of the world’s foremost experts on what goes viral and why. It’s easy to find examples of products or ideas that have spread and become popular, but as he writes, “it’s much harder to actually get something to catch on. Even with all the money poured into marketing and advertising, few products become popular.” Among the brownstones and vintage shops on St. It’s marked by a large red hot-dog-shaped sign with the words “eat me” written in what looks like mustard. You’ll notice an old-school rotary dial phone hanging on the inside of the booth, the type that has a finger wheel with little holes for you to dial each number. To your astonishment, someone answers. A reservation? But today is your lucky day, apparently: They can take you. New York City is flush with bars. Everything about Please Don’t Tell suggests that you’ve been let into a very special secret.

untitled How Your Movements Are Being Tracked, Probably Without Your Knowledge August 31, 2012 | Like this article? Join our email list: Stay up to date with the latest headlines via email. In May, Utah lawmakers were surprised to learn that the US Drug Enforcement Agency had worked out a plan with local sheriffs to pack the state's main interstate highway, I-15, with Automated License Plate Readers (ALPRs) that could track any vehicle passing through. The plan ended up getting shelved, but that did not present a huge problem for the DEA because as it turns out, large stretches of highway in Texas and California already use the readers. So do towns all over America. The group not only tracks the spread of the cameras but gives people the tools to contest their installation, or at least bring it up with their representatives. AlterNet spoke with Carl Messineo, legal director of the Partnership for Civil Justice Fund, about the spread of ALPRs, why the technology is becoming increasingly centralized, and what you can do to have a say in their proliferation.