Jim Murphy peeled like an onion by Andrew Neil - Sunday Politics. My Generation. English Scots for YES. Today sees the publication of a letter, from English Scots for YES, to the peoples of England (and indeed, the rest of the UK), explaining how we feel a YES vote is important for all our futures. 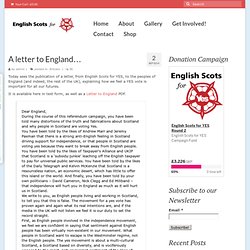 Dear England, Theconversation. Tom Devine, Scotland’s most celebrated historian of recent years, sent shockwaves through the country when he revealed in a news report in The Observer newspaper last weekend that he intends to vote in favour of independence on September 18. 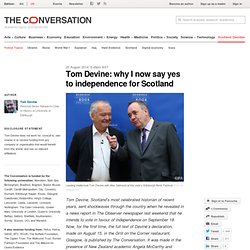 Now, for the first time, the full text of Devine’s declaration, made on August 15, in the Grill on the Corner restaurant, Glasgow, is published by The Conversation. It was made in the presence of New Zealand academic Angela McCarthy and Observer correspondent Kevin McKenna. My engagement in the Scottish independence referendum campaign before now has been restricted to impartial academic interviews. Scottish West Coast untapped oil and gas reserves worth trillions - Oil and Gas News. Published in Oil Industry News on Wednesday, 3 September 2014 Scotland could be sitting on more than double the amount of oil and gas reserves currently predicted, a new independent industry investigation has found. 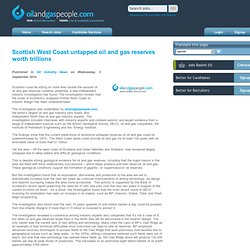 The findings show that the current predictions of extensive untapped reserves of oil and gas could be underestimated by 100%. Analysis from DECC further backs up the reports finding. Tags. Dear Eddie Izzard and friends, Please don’t go (on). Please listen to why it’s OK for us English to let Scotland go. Dear Mr Izzard and all the other English contributors to the recent “Let’s stay together” video, I am English and live in England. 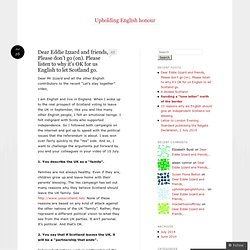 When I woke up to the real prospect of Scotland voting to leave the UK in September, like you and like many other English people, I felt an emotional twinge. I felt indignant with Scots who supported independence. Andrew Wilson: A light-bulb moment in independence. IT IS time for a light-bulb moment in how we govern ourselves, writes Andrew Wilson Curious is the world of politics. 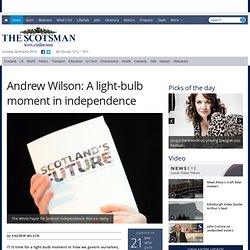 Curiouser still the people who inhabit it. Most curious of all are the ­arguments they often use to sustain their case. A Wilderness of Peace. OK, I’ve been biting my tongue in regards to Yes Scotland for a while, because I think it’s counter-productive to criticise allies in a cause. 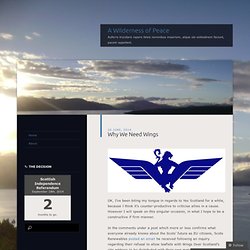 However I will speak on this singular occasion, in what I hope to be a constructive if firm manner. In the comments under a post which more or less confirms what everyone already knows about the Scots’ future as EU citizens, Scots Renewables posted an email he received following an inquiry regarding their refusal to allow leaflets with Wings Over Scotland’s site address to be distributed with their own material. The response was as follows. I have immense respect for Yes Scotland, but I really cannot agree with refusing to direct people to any information resource when they need all the help they can get. The Wee Blue Book.

WingsScotland2. WingsScotland3. NewsnetScotland. Derek Bateman Broadcaster. Scottish Statesman. National Collective. Lallans Peat Worrier. Greg Moodie. BellaCaledonia. ScotGoesPop. Craig Murray. Iain MacWhirter Now and Then. Wee Ginger Dug. Citizen Smart. Odds & Sods. The Referendum Will Stop Scots From Becoming Prime Minister, Says The Scottish Secretary. SeanMcP Blogfeast. Vote Yes for Scotland. The extreme limit of wisdom, that's what the public calls madness.: A Very Personal Welcome to the Scottish Government 'Don't Give Fire a Home' Initiative. I doubt many people will wake up early on Hallowe’en Sunday morning at the age of 23 to go in to McDonald’s to open the store for 6am. 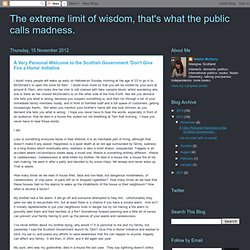 I doubt even more so that you will be visited by your aunt at around 9:15am, who looks like her chin is still stained with fake vampire blood, whilst wondering why she is there as her closest McDonald’s is on the other side of the river Forth. Nor will you demand she tells you what is wrong, because you suspect something is, and then run through a list of your immediate family members loudly, and in front of horrified staff and a full queue of customers, getting increasingly frantic.

Nor when you mention your brother’s name will she look stricken as you demand she tells you what is wrong. I hope you never have to hear the words, especially in front of an audience, that he died in a house fire, pulled out not breathing at 7am that morning. I hope you never have to hear those words. I did. A Bankie's Blether.: I Read The News Today - Oh Boy (Lennon and McCartney) "Twitter now writes the first draft of history, where journalism used to. 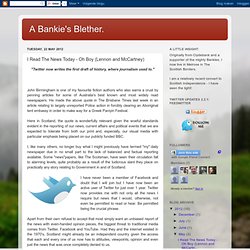 " Freedom and Whisky. Lenathehyena's Blog. Devolution Matters. Love and Garbage – some commonplace musings. Thoughtland. Johann in Blunderland. Can Scottish Labour survive Lamont’s plans? Through the Looking Glass: Johann Lamont has donned the stale clothing of Margaret Thatcher in her insulting diatribe about a "something for nothing society" In a truly desperate bid to give the once dominant Scottish Labour Party a distinct profile capable of challenging their bitter opponents in the SNP, Labour leader Johann Lamont reached not for Keynes or Marx but the collected works of Baldrick.

He it was, in the historical comedy Blackadder, who always had “a cunning plan” – usually rubbish. Pseudepigrapha. Alba Matters. Scottish Republic: Time to establish more debate on the Referendum. WHAT'S UP WITH HISTORIC SCOTLAND? Why did Historic Scotland prevent a few Scottish reenactors from having a few photos taken at the entrance area to Edinburgh Castle on Sat 22 Sept? Nicola Sturgeon - happy to be with Ed and Sandy - not so for Historic Scotland On Sat 22 Sept two reenactors who were in Edinburgh to attend the March and Rally were rudely turned away from entering Edinburgh Castle. Dressed as Robert the Bruce & Elizabeth de Burgh, Ed and Sandy of Battlefield Highland were heading up to the Esplanade (followed by many tourists taking photos and generally enjoying the spectacle) when all of a sudden one of the stewards stopped them and said " you are not allowed to go any further as this is private property".

They politely asked "why is everyone else able to go ahead and we aren`t? " Holyrood Chronicles. Scottish Tory Leader to Scots: Drop Dead. Another Scotland Office boomerang. The Scotland Office has published information today on Scotland's budgetary position within the UK over the past 30 years. 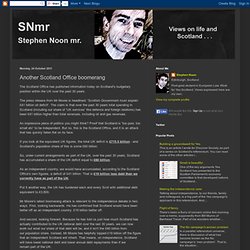 The press release from Mr Moore is headlined: 'Scottish Government must explain £41 billion oil deficit'. The claim is that over the past 30 years total spending in Scotland (including our share of 'UK services' like defence and foreign relations) has been £41 billion higher than total revenues, including oil and gas revenues. Dirty Money: The Tory Millionaire Bankrolling Better Together. Statement: This article now includes a right of reply from Ian Taylor and Vitol, which was not included in the original publication of the 7th of April, 2013. 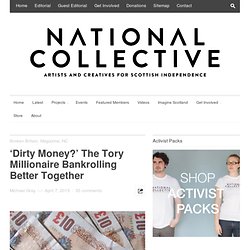 This reply is now incorporated into this article which is republished once more in full on our website. Today ‘Better Together’ disclosed £1.1 million of donations to its campaign. Almost half of that sum came from one man: Ian Taylor, a long-term Conservative Party donor and Chief Executive of oil-traders Vitol plc. Today’s Sunday Herald described Taylor as “a Scots oil trader with a major stake in the Harris Tweed industry”. They also gave Taylor’s views – who is reportedly worth £155 million – print space to justify his funding decision. This raises several concerns. Argyll News: South Scotland MSP raises the mystery of 1980s west coast oil capped on Westmister instructions. This is not one story but a cluster of stories. Chic Brodie, South Scotland South MSP has sent us a Press Release which: Ian Hamilton QC. Sixty-five years ago John MacCormick put forward the National Covenant.

Cameron, Referendum and Why Scotland's Insignificance in London is an Advantage [BLOG] A Scottish family shows its support for independence (Reuters) If you're ever looking for a textbook example of how and why London's strategies to thwart the Scottish national movement go awry with such uncanny consistency, look no further than David Cameron's announcement of an in/out referendum on Europe. Scots Politics. Alan Bissett: Is It Cos Wur Scots? Interesting wee facts from the local elections. Calum Cashley SNP: Who's obsessed by independence? The Early Days of a Better Council? Meet the main man. BellgroveBelle.