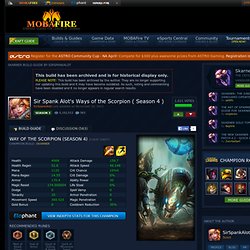 //Let us thank Janitsu's mother for giving birth to him because without him we wouldn't be having awesome banners like this. //I finally decided to rework this guide because my friends basically told me that I had to contribute something to the community so I decided to spend some time on this. Season 4 has arrived and the jungle is a chaos because everyone is trying new stuff. I am currently looking for someone who can make banners / graphics for this guide so I can make this pretty and all ^^.

Introduction // Hello guys , and welcome to season 4! Skarner , my little scorpion is better than ever as he can out-clear at least 90% of all the other junglers and he has amazing jungle pressure if played right. Fracture is the worst spell in the game so they are adding a slow on top of it but they are removing the slow from the Q ). // I guess I will have to introduce myself as well. Skarner main back in season 1 and 2. Maokai Build Guide. Introduction My Perspective Maokai the Twisted Treant is a very strong jungler and his ganks are powerful. 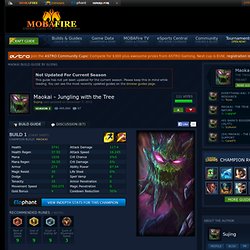 I am no pro, but I felt comfortable enough to create this guide as I have played Maokai and seen happy results in the jungle, during team fights, and especially the ganks. Maokai is a strong tank as well as he can absorb damage and protect his allies. Maokai does not really have a high damage output, he can successfully kill using his skills. Diana Build Guide. Introduction Diana is a melee AP-based assasination jungler. 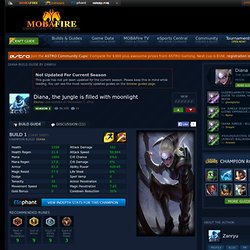 While her unique Crescent Strike needs a lot of training her ultimate Lunar Rush creates a agile assassin like Akali. Pros / Cons Important Notes Moonsilver Blade: Through the fact there isn't an auto attack timer it's impossible to time her strike because the timer will reset after 3.5 seconds without attacking anything. The time it takes for Crescent Strike to reach your target at max range is the same time Lunar Rush takes to reach so if you cast Crescent Strike into Lunar Rush you will get the cooldown refresh immediately. Fiddlesticks Build Guide. Changelog May 9, 2011 - Guide Published May 11, 2011 - Added Champion Guide May 12, 2011 - 1K views! 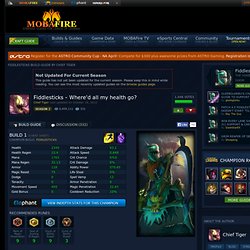 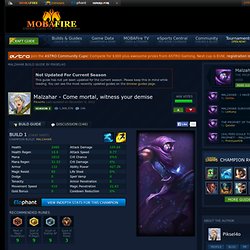 Malzahar is a great caster, and his role in the teamfight and the game is huge. Unlike most AP carries, he is able to take down even bulkier champions, sometimes even tanks. However, the key to mastering Malzahar is carefully calculating the situation, your position, and your enemies. His job in the team fight is mainly to quickly neutralize the enemy carries. Malzahar can fulfill many roles in the teamfight. So, let's begin. Thanks to Searz for the awesome guide format! Also, huge thanks to jhoijhoi, who helped me A LOT with the coding work. Soraka Build Guide. Introduction to the Guide Hello, I'm Halipupu and a main support player. 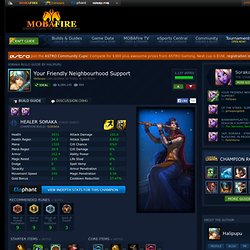 This is my guide for Soraka, your friendly neighbourhood support. Soraka is a healer type of supports who many people view as passive due to her low damage and lack of hard CC. She doesn't work with all teams, but she's a great asset for teams however due to her excellent healing skills and overall sustain provided by both heals and her Infuse. Starcall which makes her good with teams that do heavy magic damage. Soraka as an aggressive support maxing her Q instead, but this build focuses on her being a healer early game and mid to late game slightly more offensive, but mainly this is a healer build.

Picking Soraka in Competitive Play I felt like I had to make a chapter about this, since mostly when I've picked Soraka in Ranked matches I've had a very negative reception. "OMG, Soraka" "Why Soraka? " Mostly the negative reception comes from the fact that. Leona Build Guide. Introduction I'm currently playing the pre-season to update this guide with the new items, masteries and tips. 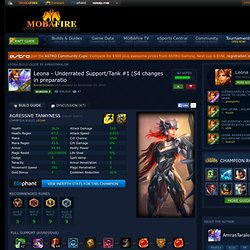 Some things are still not final (relic shield^^) so i will not change the builds yet. What I can say is that definitely Leona benefits from the changes. More Gold for supports means you can get more active in lane and better carry your ADC if the lane went not so well (that was always a problem with Leona).

Hello LoL-Community, Karma Build Guide. Introduction The Enlightened One has been the talk of League for the past few months now, demanding Karma reworks left and right, some laughing about how amazingly bursty AP Karma is. 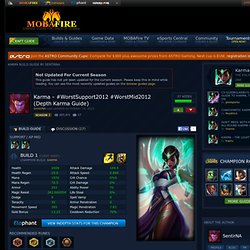 Karma is not as bad as people seem to think. Every game I lock in Karma support, people say GG 20 minute. I always leave the match with very good notes from both my team and the enemy team, have made several friends through it, and enjoy Karma more than any support from bothering to learn her limitations and capabilities. She is probably the breakthrough champion of the game. Please continue reading and see how I play Karma, why she works this way, and why she can see the light of day without being **** on by the other 9 players per game. Sona Build Guide. Champions who are capable of being useful to their teams with their skill set and items take up the role of the support. 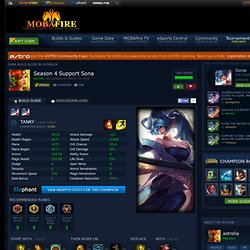 They lane with their marksman, allow them to take minions, protect their marksman in team fights from enemy threats, and also help provide vision around the map. In this guide, I will discuss one support - Sona. In lane, Sona is valued for her ability to do a little bit of everything. Crescendo, is an AoE stun which can single-handedly turn games around. Sona's a very fragile support with weak defensive stats and very little mobility. In the guide, we'll discuss your pre-game setup, what items you should look out for while shopping, what to do in lane, and what season 4 has changed for supports. Read More: Why Talisman and not Frost Queen? The reasoning behind this lies within gameplay.

Talisman of Ascension is a lot more useful to a team than Frost Queen's Claim is. Shyvana is on them with a Randuin's Omen. You can use Crescendo multiple ways in a team fight.