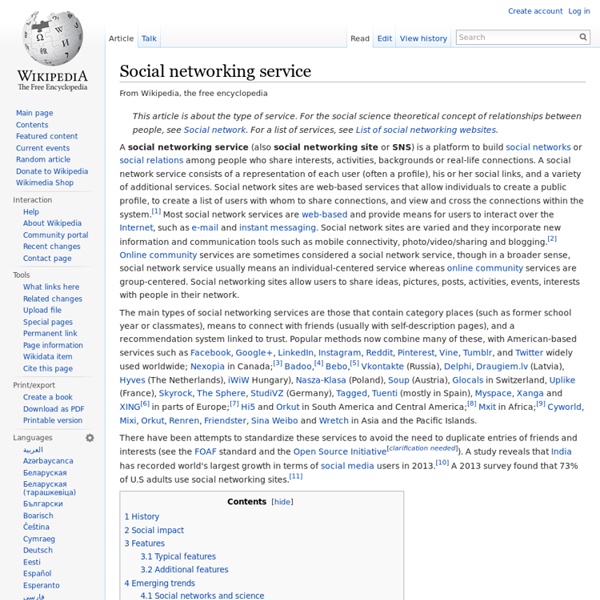 Feedly §History[edit] In November, 2006, Edwin Khodabakchian co-founded DevHD.[3] The company seeks to create a platform that uses RSS feeds, online storage, and social media integration to connect users with the information they find interesting.[3] DevHD’s first project, Streets, which aggregates updates from a variety of online sources is the basis of Feedly. Feedly, which was optimized for RSS feeds, was first released on June 15, 2008.[3] Originally called Feeddo, Feedly was first released as a web extension before moving onto mobile platforms.[4] On March 15, 2013, Feedly announced 500,000 new users in 48 hours due to the closure announcement of Google Reader.[5] By April 2, 2013, the total number of new users was up to 3 million.[6] At the end of May 2013, the total user number was up to 12 million.[7]

Nervous system The nervous system is the part of an animal's body that coordinates its voluntary and involuntary actions and transmits signals between different parts of its body. Nervous tissue first arose in wormlike organisms about 550 to 600 million years ago. In most animal species it consists of two main parts, the central nervous system (CNS) and the peripheral nervous system (PNS). WebVR WebVR is an experimental JavaScript application programming interface (API) that provides support for virtual reality devices, such as the HTC Vive, Oculus Rift, Google Cardboard or OSVR in a web browser.[1] This API is designed with the following goals in mind:[2] Detect available Virtual Reality devices.Query the devices capabilities.Poll the device’s position and orientation.Display imagery on the device at the appropriate frame rate. History[edit] WebVR was first conceived in spring 2014 by Vladimir Vukićević from Mozilla. The API's contributors include Brandon Jones, Boris Smus and others from the Mozilla team.[3] On March 1, 2016, the Mozilla VR team and the Google Chrome team announced the version 1.0 release of the WebVR API proposal.

SlideShare The website gets an estimated 58 million unique visitors a month,[7] and has about 16 million registered users.[citation needed] SlideShare was voted among the World's Top 10 tools for education & e-learning in 2010.[8][9] SlideShare's biggest competitors include Scribd.com, Issuu and Docstoc. Some of the notable users of SlideShare include The White House, NASA, World Economic Forum, State of Utah, O'Reilly Media, Hewlett Packard and IBM. §Zipcasts[edit] In February 2011 SlideShare added a feature called Zipcasts.[10] A Zipcast is a social web conferencing system that allows presenters to broadcast an audio/video feed while driving the presentation through the Internet.

Spinal cord The spinal cord is a long, thin, tubular structure made up of nervous tissue, that extends from the medulla oblongata in the brainstem to the lumbar region of the vertebral column. It encloses the central canal of the spinal cord that contains cerebrospinal fluid. The brain and spinal cord together make up the central nervous system (CNS). In humans, the spinal cord begins at the occipital bone where it passes through the foramen magnum, and meets and enters the spinal canal at the beginning of the cervical vertebrae. The spinal cord extends down to between the first and second lumbar vertebrae where it ends.

Web 2.0 for development History[edit] Technology Overview[edit] Usage[edit] Web 2.0 applications are used in the development sector for a number of purposes and by different actors. Examples are ... Pearltrees Pearltrees refers to itself as "a place for your interests".[8] Functionally the product is a visual and collaborative curation tool[9][10][11][12] that allows users to organize, explore and share any URL they find online as well as to upload personal photos, files and notes.[13] The product features a unique visual interface[14][15] that allows users to drag and organize collected URLs, and other digital objects.[16] that themselves can be further organized into collections and sub-collections,[17] (URLs). Users of the product can also engage in social/collaborative curation using a feature called Pearltrees Teams.[18] Pearltrees was founded by Patrice Lamothe, CEO,[22] Alain Cohen, CTO,[23] Nicolas Cynober, Technical Director,[24] Samuel Tissier, Ergonomy/UI[25] and Francois Rocaboy, CMO.[26] History[edit] Development of Pearltrees began in 2007.

Dura mater Dura mater, or dura, is a thick membrane made of dense irregular connective tissue that surrounds the brain and spinal cord. It is the outermost of the three layers of membrane called the meninges that protect the central nervous system. The other two meningeal layers are the arachnoid mater and the pia mater. The dura surrounds the brain and the spinal cord and is responsible for keeping in the cerebrospinal fluid. Web intelligence Web intelligence is the area of scientific research and development that explores the roles and makes use of artificial intelligence and information technology for new products, services and frameworks that are empowered by the World Wide Web.[1] The term was coined in a paper written by Ning Zhong, Jiming Liu Yao and Y.Y. Ohsuga in the Computer Software and Applications Conference in 2000.[2] Research[edit]

Pia mater Pia mater (/ˈpaɪ.ə ˈmeɪtər/ or /ˈpiːə ˈmɑːtər/[1]), often referred to as simply the pia, is the delicate innermost layer of the meninges, the membranes surrounding the brain and spinal cord. Pia mater is medieval Latin meaning "tender mother".[1] The other two meningeal membranes are the dura mater and the arachnoid mater. Both the pia and arachnoid mater are derivatives of the neural crest while the dura is derived from embryonic mesoderm. Pia mater is a thin fibrous tissue that is impermeable to fluid. This allows the pia mater to enclose cerebrospinal fluid. By containing this fluid the pia mater works with the other meningeal layers to protect and cushion the brain.