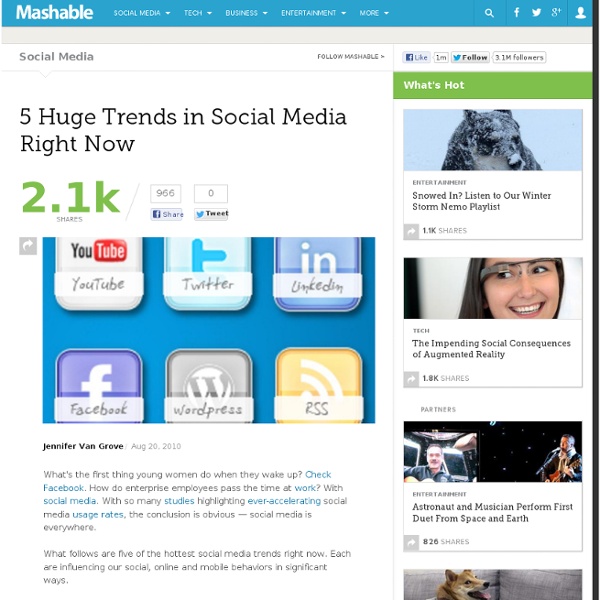 What's the first thing young women do when they wake up? Check Facebook. How do enterprise employees pass the time at work? With social media. With so many studies highlighting ever-accelerating social media usage rates, the conclusion is obvious — social media is everywhere. What follows are five of the hottest social media trends right now. Entertainment checkin services are changing the way we watch television. 1. Smartphone owners have the world at their fingertips. What this means is that at any given moment, any smartphone owner can pull out their device, fire up a barcode scanning application, scan a code and complete activities or gain access to a wealth of immediately relevant information. The consumer's scanning behavior is so significant that location-sharing checkin services such as SCVNGR are giving away QR code decals to retailers free of charge. As scanning becomes a more socially acceptable practice, the barcode scan will only become more social in nature. 2. 3. 4. 5.

The Future of the Social Media Strategist The Social Media Strategist Series is supported by StrongMail, which helps marketers forge meaningful, profitable and long-lasting connections with customers through e-mail marketing and social media. Learn more here. With evolving corporate social needs comes ever-changing roles for those who identify "social media" as a core part of their job titles. While the social media strategist role is currently a burgeoning career choice across varying industries, some debate the career's longevity. Jeremiah Owyang, an industry analyst with digital strategy consulting firm Altimeter Group, interviewed 140 enterprise-class social strategists for a report on the "Career Path of the Corporate Social Strategist" that hit the web last November. The report found that most interviewees believe that the social strategist role will "fade into the background as social technologies become a ubiquitous communication channel among consumers and companies."

From Facebook to Twitter: Save Your Community From Redundancy Caroline Chen | March 10, 2011 | 8 Comments inShare107 By understanding the nuances of each platform's digital culture, you can create unique and relevant content, speak the right language, and effectively grow both communities. Of all the social platforms, it's hard to avoid your favorite brand on Twitter or Facebook. There's a page for every living, breathing moment you have: shampoo, face wash, makeup, breakfast, work, lunch, exercise, dinner, entertainment, and sleep. I can't be alone in thinking there's not only a glut of information, but also brand redundancy that still exists across Twitter and Facebook.

The Facebook Data Center FAQ « Data Center Knowledge With more than 900 million active users, Facebook is the busiest site on the Internet and has built an extensive infrastructure to support this rapid growth. The social networking site was launched in February 2004, initially out of Facebook founder Mark Zuckerberg’s dorm room at Harvard University and using a single server. The company’s web servers and storage units are now housed in data centers around the country. Each data center houses thousands of computer servers, which are networked together and linked to the outside world through fiber optic cables.

How Google+ will succeed and why you’ll use it whether you want to or not. - TNW Google Editor’s note: This is a guest post written by Tom Anderson, the founder & former President of MySpace. Follow him on Google, Twitter, and Facebook. There’s been more than a few “Google+ is doomed” articles as of late. 101 Social Media Stats to Make Your Spirits Bright and Your Head Spin Finding the right needle in the haystack that is the Internet is often times an exercise in futility and frustration. Sure, you can find “quick tips” for just about anything, a “how-to” guide for maximizing anything you’d like to maximize, and “case studies” that illustrate someone else’s success story which you believe – for a fleeting moment – you can just as easily apply to your own situation. Most often the tips are oversimplified, the how-to guides leave much to be desired, and the case studies seem to more like exceptions than they are rules. What you really need, at the beginning, middle, and end of the day, is the truth.

Steve Jobs Resigns As CEO Of Apple Title says it all. More to come. For now, the letter from Steve Jobs himself: To the Apple Board of Directors and the Apple Community:I have always said if there ever came a day when I could no longer meet my duties and expectations as Apple’s CEO, I would be the first to let you know. Unfortunately, that day has come.I hereby resign as CEO of Apple. I would like to serve, if the Board sees fit, as Chairman of the Board, director and Apple employee.As far as my successor goes, I strongly recommend that we execute our succession plan and name Tim Cook as CEO of Apple.I believe Apple’s brightest and most innovative days are ahead of it.

Social network Social networks and the analysis of them is an inherently interdisciplinary academic field which emerged from social psychology, sociology, statistics, and graph theory. Georg Simmel authored early structural theories in sociology emphasizing the dynamics of triads and "web of group affiliations."[2] Jacob Moreno is credited with developing the first sociograms in the 1930s to study interpersonal relationships. These approaches were mathematically formalized in the 1950s and theories and methods of social networks became pervasive in the social and behavioral sciences by the 1980s.[1][3] Social network analysis is now one of the major paradigms in contemporary sociology, and is also employed in a number of other social and formal sciences.