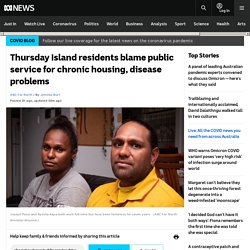 Key points: Thirty-seven departments have offices and employees on Thursday Island Homelessness and overcrowding are widespread among localsTorres Strait has highest rate of a chronic disease related to overcrowding in Australia. Aboriginal health experts want more done to tackle suicide of young people in the Kimberley. It has been 18 months since the West Australian government vowed to improve mental health services and tackle high Indigenous suicide rates in the state's north, but Aboriginal health advocates say nothing has changed. 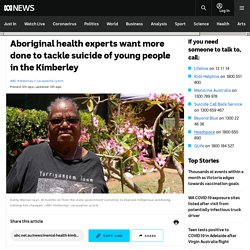 Key points: The state government last year released a plan to tackle Indigenous suicide in the regionVeteran Aboriginal health advocates say not enough is being done to tackle Indigenous youth suicideThere are calls for more services, education and engagement in the Kimberley. What it's like on frontline of Northern Territory's soaring youth detention numbers. Andrew Lockyer has made the 25-minute drive to the Alice Springs Youth Detention Centre more times than he can count. 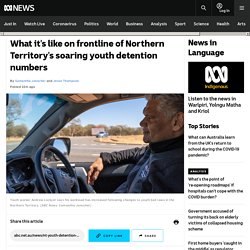 Key points: More than 60 young people have entered the NT justice system for the first time since MayYouth justice advocates are concerned it's the result of controversial youth bail lawsThe number of youth detainees in the NT has doubled over the past year. Indigenous prisoners under 'extreme distress' amid pandemic healthcare fears. Indigenous prisoners are experiencing "extreme distress" and fear longer times in custody as they struggle to access appropriate health care amid the pandemic, advocates say. 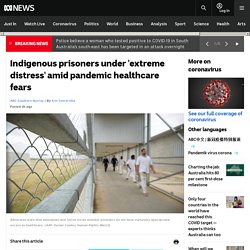 Key points: Advocates say Indigenous prisoners aren't able to access appropriate healthcare during the pandemicPeople in custody fear cuts to prison programs will delay their releaseThere are concerns released prisoners will face additional hurdles to reintegrate into society The vaccination rollout program, high transportation rates and the fear of being infected while behind bars were major worries for inmates and their families, professor Megan Williams said. Dr Williams is the head of Girra Maa, the Indigenous health discipline at the Graduate School of Health at the University of Technology Sydney, and an advisor to Corrective Services New South Wales. 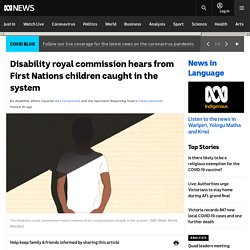 Key points: The disability royal commission this week heard stories from First Nations children and teenagersIndigenous children are 11 times more likely to be in the system than non-Indigenous childrenSome 14 per cent of those children are likely to also live with disability Now 17 years old and in the Don Dale Youth Detention Centre, the young man was moved between different out-of-home-care placements in the Northern Territory from the age of five. Warning: this story contains references to sexual and physical abuse of children. How this youth program is helping Aboriginal teens connect with history and plan for the future. At just 15, Lachlan* has had his fair share of run-ins with police. 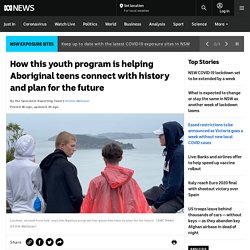 Key points: A program on the NSW Central Coast is helping teenagers learn about local history and cultureYouths involved with the program say it's helped them "stay out of trouble" or become a "better person"Hundreds of Indigenous teenagers are struggling to overcome past trauma But he hopes reconnecting with his Aboriginal heritage will keep him out of trouble and steer him towards a better life. "[Learning about culture is] a new experience for me," he said. "I never got taught that at school. NT Supreme Court judge urges action to stop sexual assault victims being banished from their communities. A Northern Territory Supreme Court judge has warned of an emerging trend of sexual assault victims being banished from their home communities. 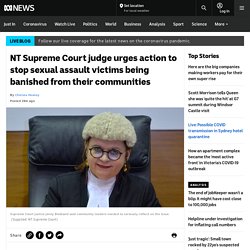 Key points: Supreme Court Justice Jenny Blokland said there needed to be serious attention paid to sexual assault survivors who had been effectively "banished"The concerns were raised during a sentencing hearing at the Alice Springs Supreme CourtJustice Blokland sentenced Simeon Riley to 12 years in jail, with a non-parole period of eight years and six months. Indigenous eviction prevention program's last-ditch bid to survive. Patricia Williams watches as a team of workers marches into her public housing home in Perth's northern suburbs, removing piles of hard rubbish and cleaning mould and dirt from the walls and floors. 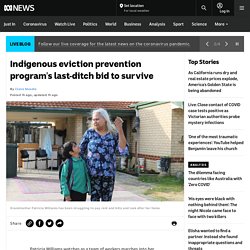 The 60-year-old grandmother has put up the white flag, calling for support to help her deal with the mess and unpaid bills that have been threatening to have her evicted from her home of 11 years. For most of those years, her daughter and grandchildren have been living with her and Ms Williams regularly takes in young, troubled relatives who need a roof over their heads and a feed. Peppimenarti community desperate for help to end violence stopping children going to school. Two Aboriginal men claim they were sexually abused during strip searches in youth detention. Two Aboriginal men allege they were sexually abused after being strip searched by workers in youth detention.

Key points: Aaron Blades alleges he was sexually abused as a teenager in the Brisbane Youth Detention Centre An anonymous man alleges he was sexually abused in Reiby Youth Justice Centre in SydneyThere are calls to reduce or ban strip searches in youth detention. The 'David and Goliath' battle behind Telstra's huge ACCC fine over its treatment of Indigenous customers. Sitting on her favourite beach in her hometown of Broome, Caitlyn Roe is a world away from Melbourne's Federal Court. 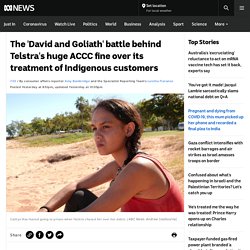 In that courtroom on Thursday, the country's largest telco was slapped with a $50 million fine — one of the most significant penalties in Australian corporate history. The decision came after weeks considering evidence put forward by Telstra and the consumer watchdog, in a case described as "outrageous" by those involved. The court heard 108 examples of Indigenous Telstra customers being pushed into phone plans they couldn't afford, only to be hit with huge bills and in many cases, chased by debt collectors. Caitlyn's story was one of the 108 — a story that helped trigger an investigation by a group of financial counsellors working in different parts of the country and eventually exposed systemic mis-selling by Telstra at five stores. This is how it happened. Indigenous death in custody at Cessnock the seventh across Australia since March.

NSW Premier Gladys Berejiklian says she’s “deeply concerned” after an Indigenous man died at Cessnock Correctional Centre yesterday — the seventh across Australian prisons since March. Key points: It is believed the man suffered a medical episode while in his cell in Cessnock Correctional Centre Seven Indigenous people have died since March 2, four in NSW prisons NSW Opposition's Linda Burney says the situation is a national emergency A Corrective Services NSW spokeswoman said the 37-year-old man was found unresponsive in his cell about 10.00am yesterday. He was pronounced dead an hour later. “Corrective Services NSW and NSW Police are investigating the incident,” the spokeswoman said. Aboriginal and Torres Strait Islander women three times more likely to be jailed in Queensland.

The rate of Aboriginal and Torres Strait Islander women being imprisoned has more than tripled in 15 years, according to a report by the Queensland Sentencing Advisory Council. Key points: The Connecting the Dots report finds fewer First Nations offenders, but a higher chance for imprisonmentElders believe community issues are linked to common offendingThe report will advise policymakers on the over-representation of First Nations people in detention Researchers examined 321,669 cases in Queensland courts from 2005 to 2019 as part of the Connecting The Dots report, which aimed to identify trends in the sentencing of First Nations offenders. Retired judge and council chair John Robertson said, overall, the number of Aboriginal and Torres Strait Islander offenders decreased over that period, but those who did commit crimes were more likely to be imprisoned.

Women more likely to be jailed. 'Notorious' NT public housing complex at Palmerston set for demolition. Seventy Palmerston public housing residents are being evicted and their 32-unit complex flattened in a move the Northern Territory government says is part of an urban renewal program. The tenants who are being evicted from the complex will need new accommodationThe complex is described as an antisocial hotspotThe demolition of the properties comes as the public housing waiting list in Palmerston is up to four years Minister for Urban Housing Kate Worden said the complex was a notorious hotspot for antisocial behaviour and at 35 years old, was past its use-by-date.

"We will be demolishing the flats behind us so we can make way for a future development," she said on Thursday outside the complex. NT coroner hears Kumanjayi Bloomfield death in custody investigation delivered 10 months late. The Northern Territory coroner has heard a recent police investigation into an Indigenous death in custody blew out to more than twice the recommended reporting timeframe. Kumanjayi Bloomfield died after a police pursuit in remote Central AustraliaA coronial inquest has heard a police report into his death was delivered 10 months lateA lawyer for the man's family said the delay distressed the local community Kumanjayi Bloomfield, 47, died in a vehicle rollover on the Plenty Highway near Harts Range while trying to evade a roadside breath test in July 2019.

"I think we have to use every available means to try and stop the development of this particular takeaway outlet," Ms Havnen said. "As people in Darwin would know, we are already confronted with a whole range of alcohol-related harms. " WA authorities investigate East Kimberley mine over iron ore spill into local waterways. NT Indigenous leader Djambawa Marawili living in tent because of dilapidated remote housing. Woman in custody at Canberra's jail allegedly strip-searched in front of male inmates in 'degrading' act.

In My Blood It Runs has a message about the love Aboriginal parents have for their kids - ABC News. In My Blood It Runs documentary addresses Indigenous youth detention and the ongoing removal of children - ABC News. DPP pursued disorderly behaviour charge against woman despite sexual assault - ABC News. Indigenous community says officer kicking teenager to the ground not an isolated incident - ABC News. Centrelink accused of inadequate service in remote West Australian communities - ABC News. Justice in remote NT bush courts is 'grinding to a halt', legal group says.

Dan Murphy's bid to set up NT store enters fifth year as appeal heads to Supreme Court. Veronica Nelson Walker's family laid her to rest not knowing how she died in custody. NT youths are often in the news for the wrong reasons but they too have a story to tell. Christian missionaries retract claim that God TV is preventing suicide in remote Indigenous communities. Indigenous woman dies in custody in Victoria two days after being refused bail. Kapani Warrior army veterans shelter displaced Aurukun residents fleeing violence, firebombings. Australian Indigenous women are overrepresented in missing persons statistics. 'No kid should be in jail': 12yo at centre of documentary issues plea to NT Parliament. Lockhart River locals skill up to build houses and reduce overcrowding in homes. Volunteers home deliver 700 meals a week to give Broome kids a good feed. Policeman won't let stabbing dampen love for tropical NT posting. Complaint lodged against judge who made 'offensive', 'discriminatory' comments to Aboriginal defendants.