UE: English Idioms and Idiomatic Expressions. ClichéSite.com - The largest collection of clichés or cliches, phrases and sayings with definitions and explanations.

Beam Up My Info. Bit By Bit, 'The Information' Reveals Everything. The InformationBy James GleickHardcover, 544 pagesPantheonList Price: $29.95 We can see now that information is what our world runs on: the blood and the fuel, the vital principle. 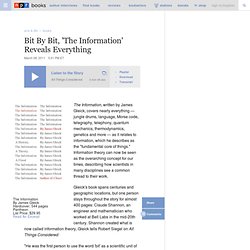 It pervades the sciences from top to bottom, transforming every branch of knowledge. Information theory began as a bridge from mathematics to electrical engineering and from there to computing. What English speakers call "computer science" Europeans have long since known as informatique, informatica, and Informatik. Now even biology has become an information science, a subject of messages, instructions, and code. "The information circle becomes the unit of life," says Werner Loewenstein after thirty years spent studying intercellular communication.

Economics is recognizing itself as an information science, now that money itself is completing a developmental arc from matter to bits, stored in computer memory and magnetic strips, world finance coursing through the global nervous system. And atoms? Bit By Bit, 'The Information' Reveals Everything. Transmission Model of Communication. Introduction Here I will outline and critique a particular, very well-known model of communication developed by Shannon and Weaver (1949), as the prototypical example of a transmissive model of communication: a model which reduces communication to a process of 'transmitting information'. 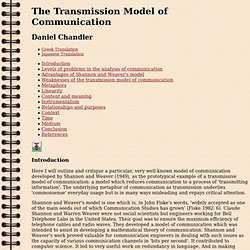 The underlying metaphor of communication as transmission underlies 'commonsense' everyday usage but is in many ways misleading and repays critical attention. Shannon and Weaver's model is one which is, in John Fiske's words, 'widely accepted as one of the main seeds out of which Communication Studies has grown' (Fiske 1982: 6). Claude Shannon and Warren Weaver were not social scientists but engineers working for Bell Telephone Labs in the United States. Their goal was to ensure the maximum efficiency of telephone cables and radio waves. C & W's original model consisted of five elements: An information source, which produces a message. Levels of problems in the analysis of communication Metaphors Linearity. Richard Bach: One More Communication Theory. Introduction As many have noted, human communication is an extremely complex field of study. Many have researched it, and these scholars have developed many definitions and theories surrounding the subject.

Criteria for a Communications Theory.